Blu-ray
The Bridge on the River Kwai 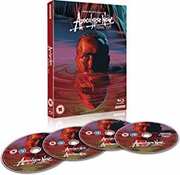 The best visual and sound technologies have been used to present Coppola's true vision of the film: one that delivers deep, visceral visual and auditory impact. "The audience will be able to see, hear and feel this film how I always hoped it could be-from the first 'bang' to the final whimper" said the film-maker.