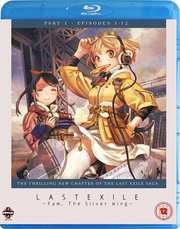 I like to give mediocre shows a second chance a few years down the line. After all, I might have just been in the wrong mood to watch a show the first time around, or I missed something special about it, or it just needs a second chance to grow on me. It isn’t common for me to change my mind about a series, but it does happen. Just over four years ago, I was lamenting Last Exile: Fam The Silver Wing as a show that was a pale shadow of the original Last Exile series. Four years ago, I also had to make do with Part 1 on DVD for review, so for this re-watch, I’ve got the first half on Blu-ray, which gives me just the excuse I need to cut and paste a review. Hopefully there is less cut and paste than I expect, and I’ll have changed my mind about Last Exile: Fam the Silver Wing. 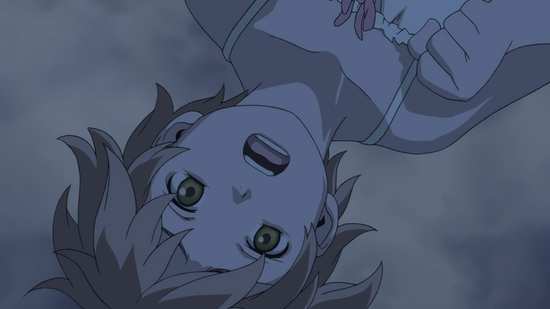 Fam Fan Fan is an eager young Sky Pirate. The Sky Pirates make a living in the distant future Earth by going after and capturing the gargantuan Sky Fish that sail the skies, town sized vessels, both military and civilian of the various nations. The first Sky Pirate to land a harpoon on a target ship gets to choose its disposition, and Fam has dreams of amassing her own pirate fleet with her navigator Giselle, as well as taking part in a Grand Race of vanships. But this future world is not the friendliest of places, especially for returnees. Years ago, when the world faced an ecological crisis, various groups of people left as Exiles, trying to escape the devastation. Those who stayed behind were the ones to rebuild the world. But once peace and prosperity had been restored to the Earth, the Exiles returned and resettled, establishing various nations, and their now vacant Exile ships light up the night skies as artificial moons. 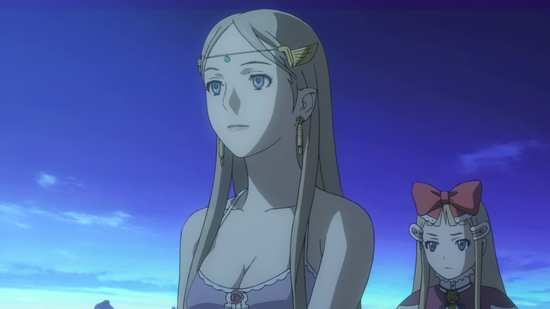 For the Ades Federation, this is an unthinkable state of affairs. The world belongs to those who stayed behind, not the cowardly Exiles that ran, and they launch a campaign to retake the land that was usurped, and return it to those who deserve it. They start by launching a war of annihilation on the kingdom of Turan. Fam and the pirate fleet are looking for targets of opportunity when they fly straight into the middle of a battle. They wind up ‘capturing’ the Turan flagship and with it the two princesses of Turan, Lily and Millia, coincidentally rescuing them from certain death. 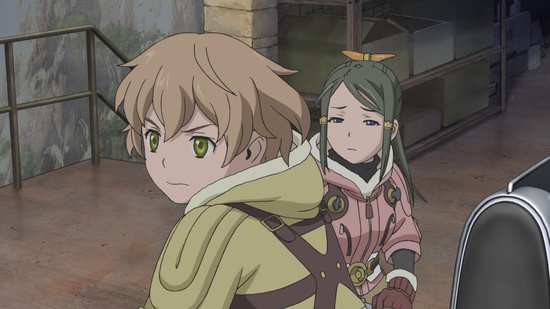 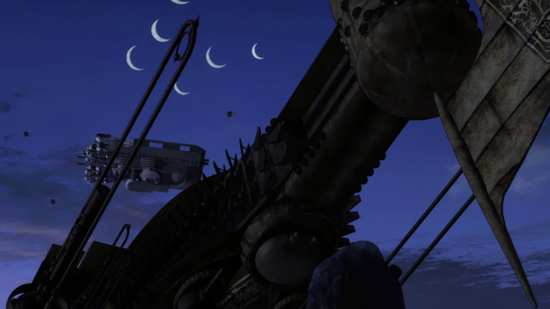 Last Exile: Fam, the Silver Wing is most definitely a show for HD. The Blu-ray presents the anime at 1.78:1 widescreen 1080p, and the image is clear and sharp, with rich colours, smooth animation, and vivid and intricate detail in terms of the world design, costumes and backgrounds. It looks stupendous, and seeing the various action sequences, the giant sky ships and vespa flyers on the big screen in HD detail is worlds apart from the DVD presentation. The CG most certainly looks better on Blu-ray, and you can now see the added detail and complexity compared to the first series. There is still that perennial bugbear of digital banding on large expanses of similar colour, most noticeable during fade-ins and fade-outs, but other than that, this is a very appealing transfer. 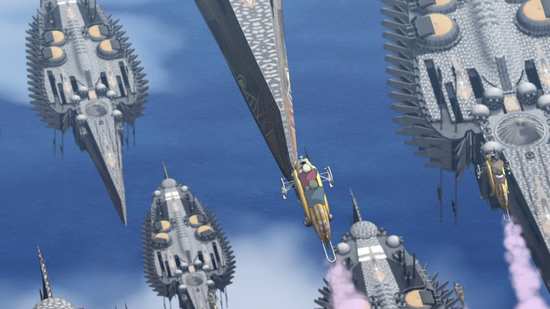 I did find that in the early episodes, characters had a tendency to drift off model, an issue resolved by episode 4, and episode 2 was a bizarre departure in that everything was rendered in CG, including the character art. It looks bizarrely out of place in comparison to the rest of the series, but by itself it reminds me strongly Arpeggio of the Blue Steel. 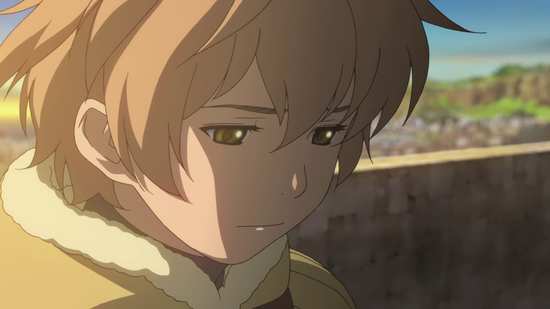 You have the choice between Dolby TrueHD 5.1 English and 2.0 Japanese, with translated subtitles for the Japanese audio and a signs (and Russian dialogue translation) only track for the English audio. I went with the Japanese audio, and wasn’t exactly overwhelmed with aural intensity. For one thing it’s on the quiet side, requiring me to nudge up the volume close to halfway. The audio bitrate also hovers around the 1Mbps mark for the Japanese stereo, which doesn’t seem quite as dynamic as other Blu-ray stereo tracks. The audio experience is adequate if nothing more. I tried the dub, and it too requires the assistance of the volume control to get a decent response. 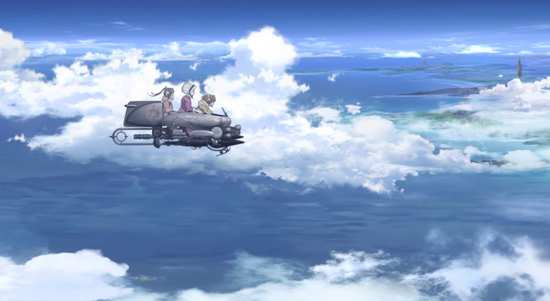 The action packed Last Exile universe is still well served by the English surround upgrade. Not so much the dub itself, as Funimation went the dubious route of giving one major faction in this story ‘English’ accents. The minute I heard the little servant boy put forth his most earnest Dick Van Dyke, I enthusiastically told the dub to go forth and multiply, and switched to the original Japanese audio, which does much better, and has the benefit of retaining the original voice cast for returning cast members, although Junko Noda’s Dio sounds a lot more childish in this version. One thing that I am happy to see return is that familiar soundtrack, which offers that futuristic Celtic sound that made the original Last Exile such a singular experience. The subtitles were timed accurately and free of typographical error. 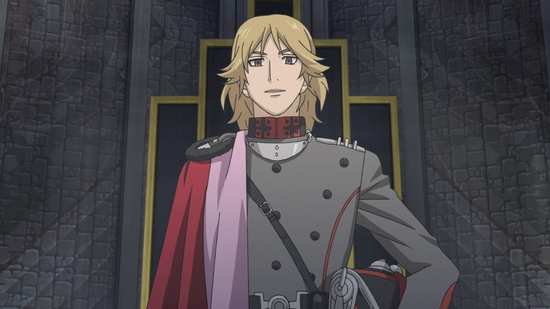 You get 2 discs in a BD Amaray style case with a central hinged panel. The sleeve is reversible, with an episode listing on one side without ratings logos, the blurb on the other with the BBFC stamp. Courtesy of Funimation in the US, Last Exile: Fam, the Silver Wing gets more than the usual quota of extras for an anime release. Both discs present their content with animated menus.

Disc 1’s sole commentary is the audio commentary on episode 1, in which ADR director Chris Bevins joins Leah Clark (Gisey), and Carrie Savage (Millia), for one of those Funimation name-check commentaries that manage to fill 20 minutes of air with nothing of consequence, although there is a mention of the futility of trying to recall the original English voice cast members for what would amount to little more than cameos in the sequel. 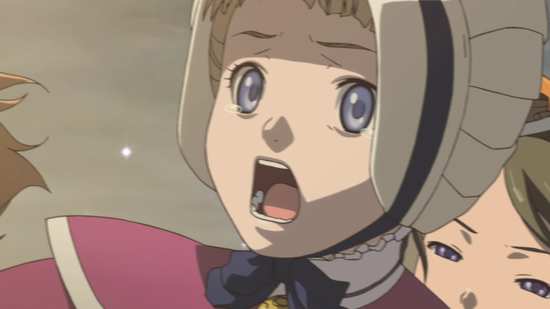 The Anime Expo 2011: Part 1 lasts 7 minutes, and catches up to the director and the producer for a quick interview about the show.

Spinoff Anime CM Series ‘Friday Night’ #01-07 offers 3½ minutes worth of entertaining commercials for the series, starring chibi versions of the characters presented as a motion comic. 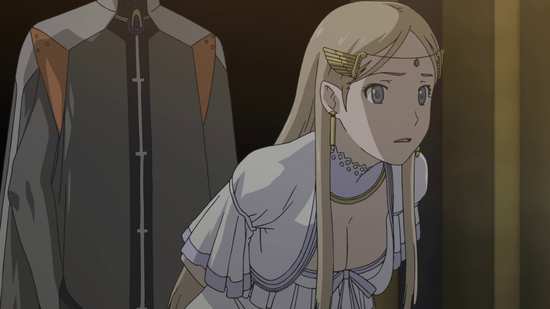 You get 45 seconds worth of commercials for the show. You also get the textless opening and two textless closings.

There are also trailers for Evangelion 2.22, Eden of the East: Paradise Lost, and K-On! The Movie. 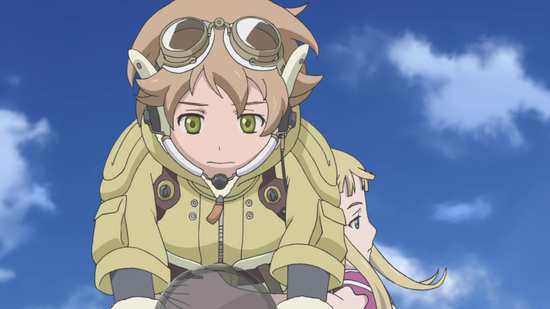 It is cut and paste time! My opinion hasn’t changed. Last Exile: Fam the Silver Wing is fun to watch, but it’s a show trying to relive old glories, and failing to replicate what made the original series so special. It’s got the epic, intense story, but it’s let down by weak characterisations that appeal to fan sensibilities before being honest to the story. It’s just far too cute for its own good. 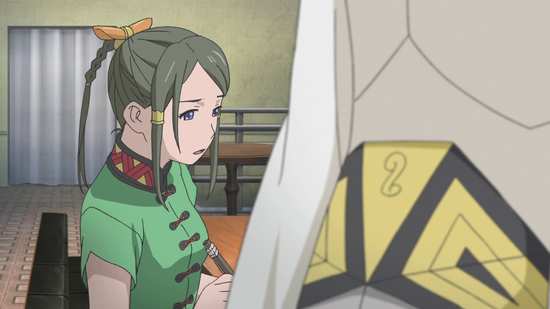 Fam the Silver Wing is a sequel to Last Exile, but for the first 9 episodes or so, it plays like a remake. We have the vanships, and the lumbering sky fortresses, we have two sides fighting for supremacy; in the original it was Anatoray and Disith with the added complication of the Guild, here it’s The Ades Federation and the Returnees, with the added complication of the Guild, and we have a bunch of little guys caught up in the middle, the Sky Pirates instead of the couriers. We also have a third party hero ship in the form of the Silvius, as opposed to the Silvana, and we have a princess that needs rescuing. The differences all appear to be cosmetic, with the action set on future Earth and the returning Exile ships the cause of the friction between them and the Ades Federation. 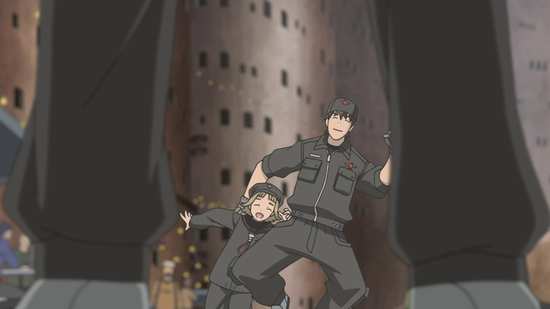 So given that it feels like a remake, the question becomes what makes it different enough to the first series to make it worth watching? On the strength of the first nine episodes, there isn’t a lot. For one thing, the characterisations are so much more wafer thin and uninteresting, conforming to the current anime clichés. Fam is the eager young space cadet with so much get up and go, it’s on a bungee cord. Her navigator Giselle is a loyal friend, but cautious and restrained, while Princess Millia starts off with the requisite portion of tsundere, before thawing out and becoming just as energetic as Fam in pursuit of her goals. The three have just enough of a ‘girls in love’ subtext to keep the fan boys interested. They’re fuelled by the insipid and flavourless writing that results in dozens of identikit anime. The same is true for many of the supporting cast as well, dull and forgettable. 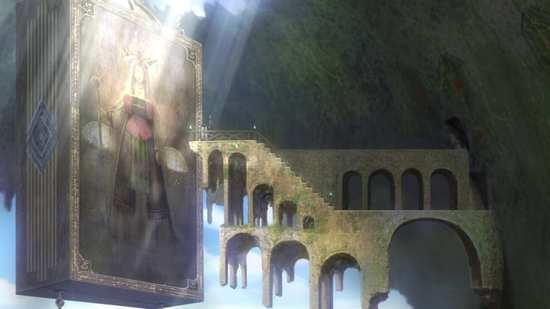 They even have to manufacture the same sort of conflict that threatened Claus and Lavie’s partnership in the original series. In that show it was a matter of philosophy, about Claus’s increasingly militaristic mindset in his obsession with protecting Alvis, versus Lavie’s innate pacifism. It came naturally from the story, and it continued and developed through the series. In Fam the Silver Wing, it’s brought about by Giselle getting jealous of Fam and Millia’s growing friendship, and is resolved by the end of the next episode by a birthday party... 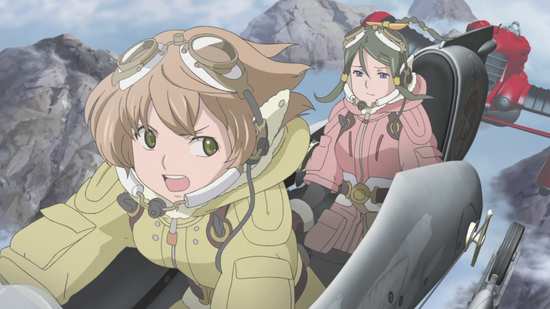 The original cast members fare little better. There just is no explanation for why Dio is in this show, given what happened to the character at the end of the original series, while Tatiana Wisla is unrecognisable from the original series character. There is a point in episode 10, where Vincent Alzay and the Urbanus show up, and you get a little colour from the character, and an explanation of what is going on with regards to the original series characters. It turns out that the Disith-Anatoray Exile is in the process of returning, and Tatiana Wisla and the Silvius have been sent ahead to scout the way, running into the Ades Federation’s reactionary fervour against the Exiles at the worst possible time. But there’s still no reason why Dio’s in the show. 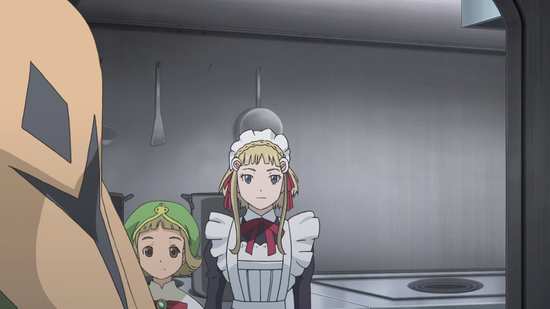 Episode 10 is where it gets interesting, and it distances itself from the original story, not only by clarifying what happened to the Disith-Anatoray Exile, but by sowing a seed of conflict between sisters Lily and Millia which turns the story on its head. That’s after a filler recap episode, and 9 episodes in which this show was merely aping what had come before, albeit with a moe makeover. Episode 10 is indeed where my attention focused, and that it was followed by a flashback episode which filled in much of this world’s back-story did it no harm. Unfortunately that’s where the story pauses until part 2 is released. Last Exile: Fam, The Silver Wing isn’t a patch on the original series, and it’s missing the complex characterisations and intriguing enigmatic storyline. This show really could do with an Alex Row or Claus and Lavie to give it depth. Instead we have clichéd shallowness in the form of the title character and her friends. 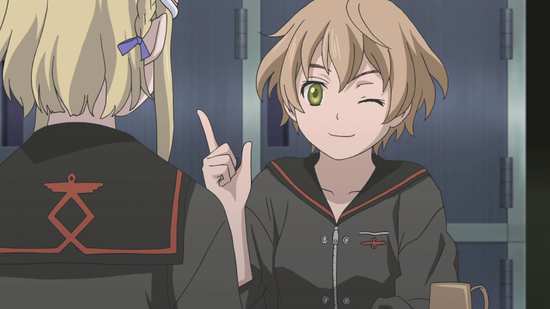 Blu-ray is usually better than DVD, and I have to say that I had a lot more fun watching these episodes in high definition than in SD. But, this time I know what’s coming in part two and I have to mark this collection accordingly.