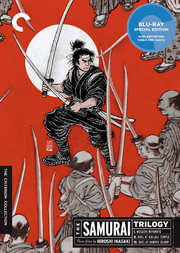 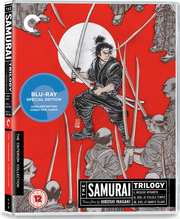 DVD
Hidden Fortress, The (US)

Review for The Samurai Trilogy - Samurai I, II & III 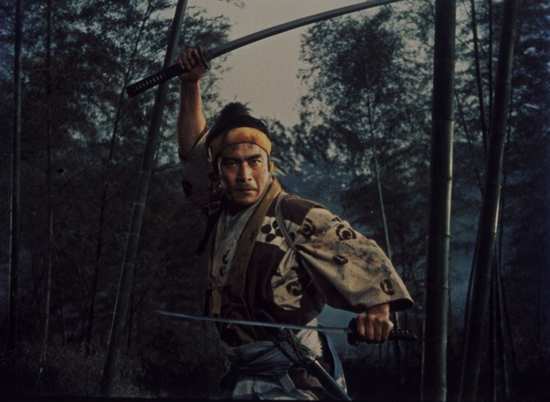 I’m always happy to review a Criterion disc. In the Blu-Ray and DVD collecting community, especially in the US, it’s become synonymous with high quality transfers of high quality films – often with wonderful contextual extras. Of course. ‘The Samurai Trilogy’ is no exception, though is surprisingly light on extras.

Watching ‘The Samurai Trilogy’ for the first time, I was surprised how melodramatic it was; a veritable potboiler on an epic scale, having more in common with ‘Gone with the Wind’ than ‘Enter the Dragon’. Although there are some very decently choreographed fight scenes, this trilogy is less martial arts than it is rites of passage; a road movie of sorts, full of tales of unrequited love, double dealings and injustice. In other words, wildly entertaining.

It’s also an incredibly consistent trilogy in much the same way that ‘Lord of the Rings’ was, for example; planned and cast as a trilogy from the outset. In that regard, the films seem more like a single narrative than separate parts and it can be viewed in much the same way as a box-set series might today.

Each of the films are directed by Hiroshi Inagaki and star Toshiro Mifune, a big star from the 1950’s both in Japan and in the USA, 1950s, in the ‘title role’ as the would-be Samurai on his journey to enlightenment.

Based on a popular post-war novel, it’s a veritable saga loosely based on the story of a legendary seventeenth-century swordsman, writer, and sculptor – Mushashi Miyamoto, travelling from his miss-spent outsider youth to his final battle and enlightenment.

Samurai I - Musashi MiyamotoIn the first part of the epic Samurai Trilogy, released in its homeland in 1954, not long after the end of World War Two and a humiliating national defeat, as well as the horrors of Hiroshima and Nagasaki, this epic return to core Japanese values proved to be a big success, winning an Academy Award as the best foreign film of 1955.

It does have an epic quality from the very start with a large cast, a rich, orchestral score and ambition and scope that exuded spend.
Toshiro Mifune is perfectly cast in the title role; moody, silent and an imposing physical figure too.

Seeing an army platoon marching through his village, he decides that he should join up and become a hero. He and a friend both join up together, though it isn’t long before they realise that life in the Imperial army isn’t all its cracked up to be. When the enemy overwhelms his platoon, he decides to stay and fight to the bitter end events mean that he himself is soon on the run – a fugitive despite his very best efforts for his country.
But like all great men, he is saved by a beautiful woman and a priest who recognises in him the qualities of a great warrior and who sets him on a path to become a true Samurai. 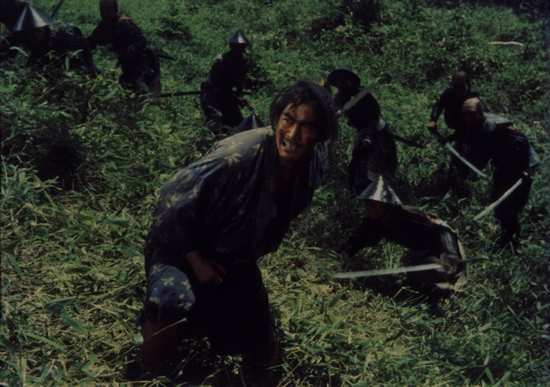 Musashi Miyamoto continues his journey, despite the unrequited devotions of two beautiful women, Otsu (Kaoru Yachigusa) and Akemi (Mariko Okada), who each make sacrifices of their own to be near him, despite the fact that they know that he has chosen the way of the sword over his love for them.

The second part of the trilogy has perhaps the most action. There is a scene, for example, that could conceivably rival ‘Enter the Dragon’ for sheer scale, when Miyamoto takes on about fifty warriors at once – eventually beating them all. Perhaps this was what started that whole sub-genre?

The cinematography (Jun Yasumoto) is often stunning, equalling the very best Hollywood films of the time, and the music, whilst orchestrally expansive, in common with a John Ford Western score for example, is spectacular. It just feels so big and epic.

Though romance takes second fiddle to the action here, as Mushahi matures as a warrior to beyond mere power and anger, there is still enough to keep the film on path – and there is plenty ore melodrama to come in part three. 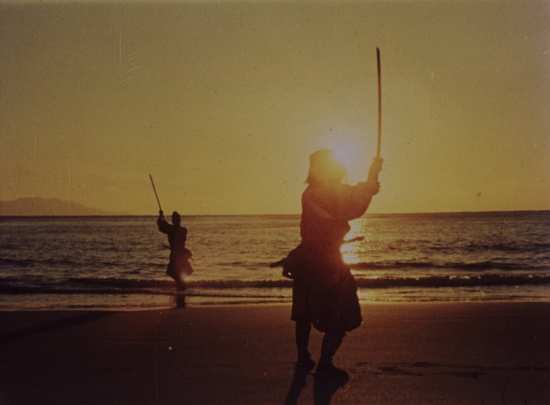 The film starts with a Musashi getting back in touch with his softer side and trying not to be merely ‘powerful’, To achieve this he has relinquished his Samurai path and become a humble farmer in a remote village. In the meantime, his nemesis Kojiro (Koji Tsuruta) now officiually serves the Shogun, the ultimate goal for any Samurai.

When warlords wreak havoc in his village, it proves too much for Musashi and he reluctantly returns to fighting to bring justice. In the meantime, Kojiro is waiting for a promised final face-off. He knows that Musashi is is his only living opponent worth of such a battle. Musahi understands this too – that a final battle between the two is all but inevitable.

Eventually, the date is agreed. With not one, but two women watching for what happens next, Musashi knows that he must hold his sword again.
Image quality throughout is stunning. The transfers are almost flawless and the high-definition re-mastering is really impressive. Presented in their original, 4:3 format, it’s almost unimaginable that you would find a better version than these. 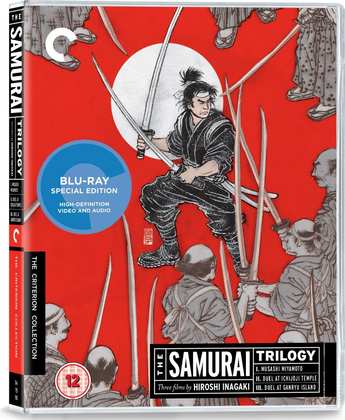 The only extras included on this two-disc set (with the first two films on one disc and the third on the second) is a 10 minute chunk per movie of a single interview with translator and historian William Scott Wilson about the real-life Musashi Miyamoto, the inspiration for the hero of the films.
There are also trailers and a printed booklet featuring new essays by film historian Stephen Prince and William Scott Wilson.

A really stunning set that anyone with an interest in classic Japanese cinema should get hold of. You won’t be disappointed.