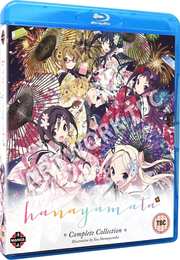 It’s rated U! It does occasionally happen that an anime gets a U rating from the BBFC, but it’s a rare occurrence. Ten or so years ago there might have been dread at seeing an anime submitted for rating, back when Manga Video were going for shock value, and you’d wonder if the title would actually wind up cut. In these more enlightened times, we get a broader spectrum of anime released in the UK and the BBFC are more au fait with anime as a medium. But still, the usual rating hovers around the 12-15, and we might get the odd PG. Even shows aimed at young children, shows like The Adventures of Mini-Goddess got PG ratings in the UK. It all comes down to different audience sensibilities comparing the UK to Japan. When it comes to what children can watch, Japanese broadcast authorities have no hang-ups about characters that smoke (a no-no in the UK), they’re less strict on screen violence, and you can mix more mature subject matter with content aimed at young audiences. The original Sailor Moon release was censored to rewrite a character to omit her homosexuality for example. So I am curious to see just what a U rated anime will be like. Before you panic at the idea that it will be tame, neutered and dull, the last U rated anime that I can recall off-hand was Oh My Goddess: Volume 2, the OVA series, and I love that show. 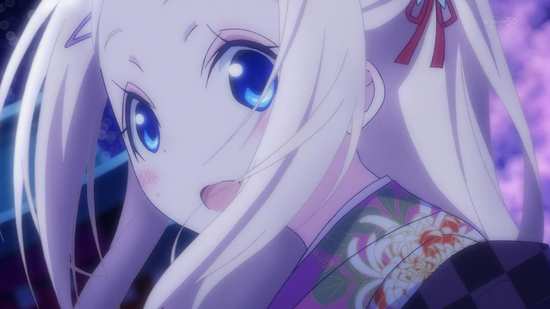 Naru Sekiya is the girl that no one notices, not that she makes any effort to be noticed. She’s shy, introverted, and has settled into the average life of a sidekick, supporting her friend Yaya who is a drummer in a band at school, or idolising her ‘princess’ like friend Tami. Naru never thought that she’d get the chance to sparkle, until she met Hana N. Fountainstand, a foreign student who transfers into her school, with a love of all things Japanese, and particularly the Yosakoi folk dance. In fact, Hana wants to start a Yosakoi club in school, and she wants Naru to be her first member. Recruiting more members for a club, getting a teacher as an advisor, and getting the Student Council President Machi’s approval isn’t easy, but they don’t have long until the Hanairo Yosakoi Festival.

12 Episodes of HaNaYaMaTa are presented across two Blu-rays from Manga Entertainment. 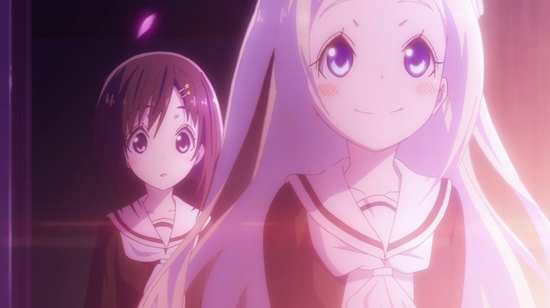 HaNaYaMaTa gets a 1.78:1 widescreen 1080p transfer on these Blu-rays. It really does feel as if Sentai are getting the hang of this Blu-ray stuff, as following a pleasing transfer for Punch Line, I now get to see another compression free, artefact free, and digital banding free anime from their authoring. It looks fantastic, clear and crisp, smooth animation, bringing across the source material to excellent effect. It’s a delightful slice of life show focusing on middle school girls, so the character designs are cute and appealing, of the expected anime style, but individual enough to be memorable. The world design suits the gentle and light nature of the story well, while the colour palette tends to the warm, soothing pastel end of the spectrum, again ideally suited for a show of this nature.

You have the choice between DTS-HD MA 2.0 Stereo English with signs, and Japanese with subtitles, with the audio and subtitles locked during playback. I was happy enough with the original language audio, with the characters sounding very appealing and likeable, the music sequences coming across with vibrancy, and the stereo offering a nice level of ambience. The subtitles were accurately timed and free of typographic error. I checked to see that the English dub exists, and what little I heard of it dissuaded me from trying any more. 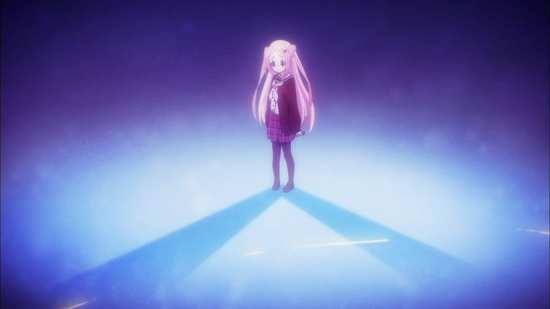 The discs present their content with static menus, and each episode is followed by a lengthy translated credit scroll.

The sole extras are on disc 2, and amount to the textless credits (including 2 closings), and trailers for Glasslip, La corda d’oro – Blue Sky, Locodol, and Hayate The Combat Butler – Heaven is a Place on Earth.

HaNaYaMaTa is a joyful little show, one of the best of its genre, and it’s well worth buying. It just about sneaks that U rating as well, certainly not compromising its story for a more family friendly rating, as it skirts the edge of a PG with the odd moment of innuendo, and the occasionally more adult theme. But I certainly didn’t think that it would be as good as it turned out to be in the end. You see it’s all been done before, several times. HaNaYaMaTa is yet another show in a long line of shows about friends bonding through an after-school club. It’s another series of extra-curricular slice of life fun, and it manages to hit every cliché in the book during its twelve episode run. 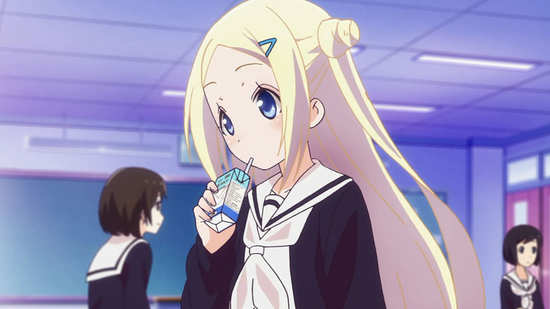 You have one character that’s passionate about a certain activity, so much so that they want to start a club. You have the typical issues with recruiting members (at least one of which will be reluctant to the point of adamant), you have to get a teacher to act as an advisor, and you’ll inevitably have problems finding a club room, getting the permission of the Student Council President, and so on and so forth. There will be something to aim for, a concert, or a sports meet, a whole lot of training, and learning, there will inevitably be a training camp, where most likely swimsuits will be deployed, and at the last minute there will be a crisis that needs to be overcome. And all through this, we have the joy of watching these characters bond, become friends, and revel in the minutiae of their lives.

We’re talking K-On!, Love Live, Free! and so many other such shows, and I have to admit that I really had a sinking feeling when HaNaYaMaTa set off down that well trodden path. But there’s aping a certain genre, revisiting its key ingredients, and then there is using those ingredients to best effect so as to make the epitome of that genre. That’s what HaNaYaMaTa does; all the clichés and tropes of the genre may be present and correct, but this is as good as it gets. This might just be the quintessence of the after-school club genre, and yes even more refined than K-On! (K-On!’s still my favourite though, the characters in that show can’t be surpassed). 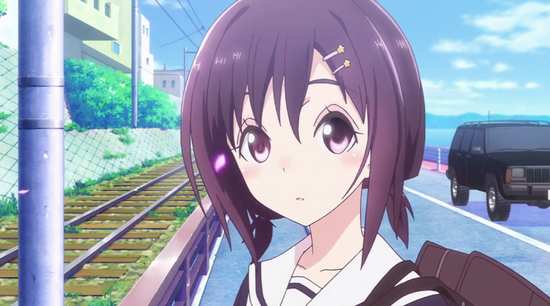 HaNaYaMaTa is all about Yosakoi, a fusion of traditional Japanese dance with modern music, dating from the 1950s. The force behind the club is Hana, a foreign student who transfers into a Japanese school, a bit of an outsider due to her differences, but someone who has the outsider’s passion for Japanese culture. She fell in love with yosakoi from the moment she first saw it, and became determined to participate. Now that she’s started school, she will create a yosakoi club, and find someone to dance with. Her first member is Naru, a girl with sidekick written all over her. She loves fairy tales, and has long since wished for a fairy tale transformation into the princess of her own life story, and when she first sees Hana, she mistakes her for a fairy, so that when Hana asks her to dance, she briefly forgets her innate shyness and dances with Hana long enough for Hana to realise that she has her first recruit. 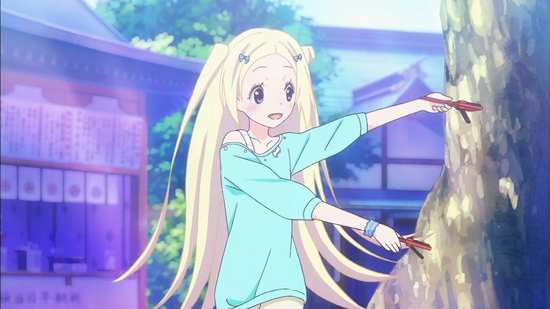 Gradually the club grows. Yaya is one of Naru’s best friends, a drummer in a rock band who epitomises the free spirit and willingness to try that Naru wishes she had, although Yaya begins to worry that she’ll lose the support of her friend, when Naru starts spending more time with Hana. Tami on the other hand is the daughter of a rich family, elegant and refined, epitomising the fairy tale princess that Naru looks up to, although all of her life, Tami’s done the things expected by her family, in terms of education and her free time, and prior to the Yosakoi Club, she’s never done anything purely for herself. Machi is the student council president, also Tami’s friend, and initial impediment to the club’s existence, although most of that is down to the teacher advising the club, Sally-sensei, who happens to be Machi’s estranged older sister.

That is HaNaYaMaTa’s biggest strength. While the characters might not be as quirky or individual as those in K-On!, what the show has is a surprisingly powerful narrative arc for what you’d think is just a slice-of-life show. Each of the characters grow through the series, they all have their hang-ups and weaknesses, and issues that they have to resolve, and it turns out that they have to work their problems out together. There are moments of self-realisation and growth for the characters in the show that will bring an appreciative tear to the eye. Of course there’s plenty of comedy and silly character antics as well, making HaNaYaMaTa a solid piece of entertainment. 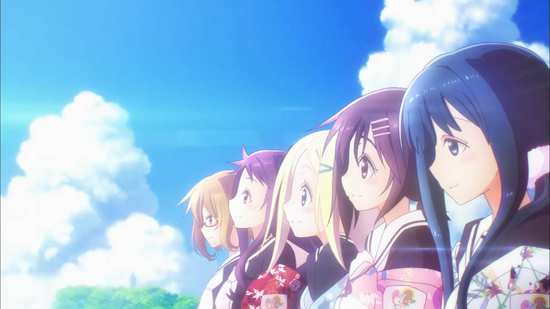 The after-school club anime has all been done before, but none of those shows has done it quite as well as HaNaYaMaTa. In an over-subscribed genre, this show came as a pleasant surprise, and it’s well worth picking up.