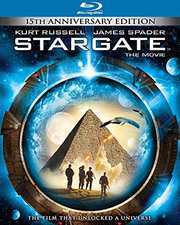 Stargate The Movie is 20 years old this year (A 20th Anniversary release came out in October in the US). Chew on that for a while, as you contemplate your mortality. And indeed, it is now known as Stargate The Movie on this 15th Anniversary US Blu-ray Edition, not just Stargate, to differentiate it from the franchise that it spun off, including Stargate SG1, Stargate Atlantis, and Stargate Universe. That’s a whole lot of Stargate, and there even has been talk recently of rebooting the movie. You may be wondering just why I went for the US All Region release from Lionsgate, as opposed to the UK Ultimate Edition (pretty much the same disc) from Studiocanal, spending a couple of pounds more in the process. The simple reason is subtitles. The UK disc lacks English subtitles, which is the dumbest thing I have ever heard. The US disc has English subtitles, insurance for the film’s 60th Anniversary, by which time I’ll really need them, either that or an audio descriptive track (no AD track on either disc if you’re wondering).

In 1928 on the Giza Plateau in Egypt, an unworldly artefact was uncovered, but it wasn’t until nearly 70 years later that the markings on it were deciphered. It takes an unlikely academic, Daniel Jackson, who’s been laughed out of his field of expertise because of his crackpot theories, to apply those theories and activate the artefact, which he reveals to be a Stargate. It opens a portal to a world on the other side of the known universe, which is when the military take charge. What was an archaeological relic has now become a security risk, depending on what lies on the other side. They need to find out just what that is, but a reconnaissance mission is meaningless without a way back. Daniel Jackson claims he can decipher the Stargate revealed on the other side, but he may have spoken too soon, especially as a trip through the gate reveals a civilisation of humans, descended from ancient Egyptians, mining a powerful mineral. They’re slaves to the God Ra, the actual Egyptian God Ra, who’s in reality an alien subsisting in human form, and Ra isn’t best pleased to see a band of technologically advanced humans showing up with crazy ideas about freedom, justice, and pre-emptive nukes.

I find that I’m justifying my Blu-ray double dips less and less these days. Blu-ray just looks better, but I have a good reason for upgrading Stargate to HD. With the advent of DVD came the prospect of extended editions and seamless branching discs. For a couple of the Emmerich/Devlin movies, these were done on the cheap. You’d get a native film to PAL conversion for the theatrical footage, and then as soon as you got to the extended footage, it would drop to NTSC-PAL standards converted quality, 480 lines of resolution up-scaled to 576, replete with motion blurring and blended frames. They were little minefields of naffness in otherwise decent transfers, and a reason why I stuck with the Theatrical Versions for re-watches. The Blu-ray of Independence Day avoided the issue by sticking to the theatrical cut only, but this 15th Anniversary Edition of Stargate does indeed have both Theatrical and Extended Versions of the film via seamless branching, and this time it’s all in the same resolution, the image actually is seamless.

On this Blu-ray, Stargate gets a 2.40:1 widescreen 1080p transfer, and the results are pretty fair. It’s a nice, filmic transfer, with natural grain, and even an imperceptible wobble to the image (only really noticeable for credits and captions). Detail levels are good, colours are consistent, if a little afflicted by a red push, but the grand sets and production design really do shine on this disc, particularly the interiors of Ra’s spaceship. The film comes across just the way I like, it feels as if it’s been transferred to the disc with the minimum of processing and interference, and I might as well be watching it in the cinema back 20 years ago. Any niggles will come down to that 20 year old source, and detail levels in darker scenes aren’t good, detail levels in dusty scenes aren’t great (and given the setting of the film, there is a fair bit of dust), but it’s when the film gets dark and dusty that the image quality might elicit a few whines from videophiles. Don’t be surprised by some waxy skin tones at such points.

Lionsgate grace this disc with a DTS-HD MA 7.1 Surround English track, as well as a DD 5.1 Surround French track (for the theatrical cut only), along with English and Spanish subtitles. The film also has burnt in subtitles for the non-English dialogue, in a somewhat garish yellow font. But a summer blockbuster like Stargate deserves a surround track worthy of the name, and what you get here really does deliver in epic action, bombast, and of course David Arnold’s memorable and overqualified score. As I mentioned in my review of the DVD, it wouldn’t be out of place in a David Lean epic. The richness and added clarity of the lossless audio is to be appreciated, while the dialogue remains clear throughout, even in the most complex of sound-designed moments.

The latest first world problem is the eco-case. I don’t want my Blu-ray cases to have holes cut in them to save on plastic, and is the only (well not really) flaw I can find with this Lionsgate release.

The disc autoplays with 10 minutes of trailers, including two animated Hulk feature disc releases, The Spirit, The Forbidden Kingdom, and Battle for Terra.

You get a nice Stargate themed animated menu, and this is one of those discs that windowboxes the movie as it’s playing into a corner when you press the Pop-Up Menu button.

You get your usual choices, Play, Scene Select, Set-up, and Extras, although Play offers you the option of the Theatrical Cut (121 mins), or the Extended Edition (130 mins).

The copious extras on this disc begin with Stargate History Made, a 1080p featurette running to 22:30, which gathers three smaller featurettes that look at the concept of the film, the making of, and the legacy from a 2009 perspective, with interviews with some of the cast and crew.

Here’s another flaw and first world problem, the Picture in Picture Stargate Ultimate Knowledge featurette. It’s only available on the Extended Version, and pops up little info and interview snippets as you watch the movie. It’s one of those Bonusview things, which I refuse to watch out of the hassle of having to go into the set-up menu of my player to disable Bitstreamed audio, and then forget to re-enable it afterwards.

Master of the Stargate: Interactive Trivia Challenge is one of those java games that you’ll load up, take one look at, exit, and never consider again.

Is There A Stargate? Lasts 12 minutes and is in SD, a short documentary feature on Ancient Astronauts and anomalous history, with an interview with none other than Erich von Daniken.

Making of Stargate Documentary lasts 23 minutes in SD, and is the usual EPK stuff that was produced with the film back in 1994.

The Gag Reel last 3 minutes (SD) and is eminently forgettable, and lacking in actual gags.

The original Theatrical Trailer is one of those ‘all the best bits of the movie in 2 and a half minutes’ jobs, but at least it’s in HD.

Also From Lionsgate basically plays the trailer reel from the start of the disc again.

Finally the Audio Commentary is here, but it’s concealed like an Easter Egg. It’s the same Dean Devlin and Roland Emmerich commentary from the DVD release, but to find it, you’ll actually have to start the Extended Version (it’s not on the Theatrical Version), and access the audio options from the Pop-up Menu to get to it. It’s not on the Main Menu.

Stargate is still one of my go-to summer blockbusters. It’s not so big that it’s drowned out by its own effects budget, but it still manages to fill the screen. It has a semblance of intelligence to its story that holds the attention long enough, imbues enough of a sense of wonder, that you can choose to overlook its many weaknesses while you watch it. And you get to care about the characters, they’re given a little more development than the usual gung-ho stereotypes, and Kurt Russell and James Spader give really strong performances in what is if truth be told a glorified b-movie. It is pure pop-corn fun, which doesn’t outstay its welcome, and which was at one time all that you could hope for from a summer blockbuster.

Of course once you start giving the plot some scrutiny you can pick holes in it to your heart’s content, and on occasion the dialogue is so clichéd that it can make your teeth itch, although whether it was actually clichéd back in 1994, or has become so in the last 20 years with so many films aping the formula, is becoming a little blurred in my mind. I do remember the ‘other side of the known universe’ line giving me almost terminal eye-roll back in the cinema though.

The key is not to scrutinise films like Stargate too deeply. They are all surface and no depth, and are meant to be enjoyed like that. In the decline of the Emmerich Devlin summer blockbuster, Stargate represented the peak. They may have begun with the entertaining Universal Soldier, but that was a film that was limited by its budget. They got the money they needed for Stargate, but also managed to keep the characterisations and the sense of humour. But with each subsequent film since then, the budgets went up, and so did the effects shots, but the characterisations grew ever more anorexic, while the films became more and more of a humour vacuum, ending up at the utterly morose The Day After Tomorrow. When it comes down to it, if I could have only one of their summer blockbusters in my collection, it would be Stargate (also better than the TV shows it spawned), and this Blu-ray is a fine way to own it.