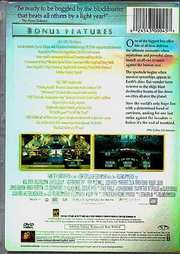 Back Cover of Independence Day

DVD
Patriot, The (US) 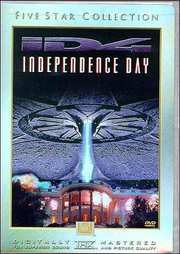 Synopsis:
One of the biggest box office hits of all time delivers the ultimate encounter when mysterious and powerful aliens launch an all-out invastion against the human race.

The spectacle begins when massive spaceships appear in Earth`s skies. But wonder turns to terror as the ships blast destructive beams of fire down on cities all over the planet.

Now the world`s only hope lies with a determined band of survivors, uniting for one last strike against the invaders, before it`s the end of mankind.

Ok, you know the plot:

Bad aliens come to Earth. They stuff the Whitehouse (`Ray!) and the Empire State (`Yaay!). They wipe out the USAF apart from Will Smith, who biffs up an alien, and drags it to Area 51. Brundlefly and Will fly up to the Mother Ship, sort it out, and Save The Earth (Yes!). Cue American speeches and backslapping whilst the alien scum BURN! (How come the enormous ship didn`t just fall on top of area 51 and squish it all flat then? :)

Disk 1 contains the film, The animated menus are great!
You can choose the standard cinema version, or the extended directors cut, and the sound: 5.1, or Dolby Surround, IT`S NOT DTS :(
There is also the worst directors commentary I have ever heard, and a reasonable special effects commentary, as well as a French Dolby Surrond track.

The picture is anamorphic, and I found it to be excellent, with no visible artifacts at all. However, The 5.1 sound seemed to suffer from weak explosions. I had to turn up the subwoofer a bit, but this didn`t really help. There are some good spot effects, like when the fighters swoop past, and the opening title and THX logo!

The extra scenes seemed to fit nicely: from memory there are a few more scenes with the family of the crop sprayer pilot, and quite a nice scene where Data is showing Brundlefly around the captured ship, and breaking bits off!

(I didn`t notice the layer change on my Wharfdale, so it must be nicely placed at the end of a scene)

Disk 2 has all the features, and I haven`t really played with this, apart from the Easter Egg.

You can turn on the comuter on the desk, which activates the alien ship. If you go back to the main menu and enter the number 74 and "enter" on your remote you get inside the ship, and can view random combat scenes, and extended news broadcasts, and play with the sound.

There are some stills, and documentaries that I have yet to watch.

That great feel-good movie if you liked the film you will like the DVD!
The extras scenes we could have done without and like Armaggedon they just made the film longer not better.
The bonus material was a bit repetitive! but still cool
The real extra is athe commentry! Loved IT!!!
Thats` all for now!
posted by Magnum on 16/7/2000 23:58
9 / 10

For the expensive box you get a nice treat, even though i am not a fan of this movie. One disc containing 2 versions of the movie, cinema release and the director`s cut, finally explaining how it was possible to hack into the alien computers. Second disc, many extras, more trailers than any DVD and a nice Making Off and Mockumentary. Both discs are filled with nice interactive menus, very nive to look at. The box still could have had an interchanging picture like on the tape. But one can`t have it all. Let`s wait for the next ID4 Special Edition Cover Edition for 40 bucks!
posted by OdinW. on 25/8/2000 05:28
9 / 10

I was so impressed with this DVD, I paid £12.00 for a £24.00 double DVD set!!! The quality is superb, and the additional scenes make this even better. Disc 2 is packed with features all choices made through brilliant animated menus.But its the feature that stands out. Presented in THX quality sound with crystal clear visuals, it may be four years old but it doesnt show!! Oh I almost forgot the plot, aliens attack earth on july 3rd and are wiped out by the fresh prince(will smith) and the prez(bill pullman) with a little help from the fly(jeff goldblum) on July 4th!!(what luck eh!!) The special effects are fantastic and this film will never lose its excitement, pace and action. A recommended purchase...Oh yeh and theres hidden features too!!!
posted by subzero30 on 25/12/2000 21:20
8 / 10

A Good film on a very good DVD.
This may not be the best film ever but it has groundbreaking special effects and a strong cast. It is very entertaining.
The DVD is also one of the best with very informative bonus materiel and very good picture and sound.
posted by Anthony Sydric on 17/1/2001 14:02
9 / 10

Region 2 Review
I got this on release day and I would just like to say - "This film still rocks"
I saw the original in the cinema all those years ago and was blown away by the sound and picture quality - I swear the walls of the cinema were shaking from the opening scene (shadow passes over the moon).
Got it home and cranked it up and again the walls felt like they were shaking. :O)
Picture quality is excellent and the sound quality is (to use a paraphrase) out-of-this-world! Best use of THX I believe I`ve ever experienced.
Yes it may be another "God Bless The USofA movie" BUT you can`t help but like the effects and the excellent performances of Mr.Smith and Mr.Goldblum.
The inclusion of what would have been the original ending is a very nice feature - but it`s easy to understand why they chose the one they did. All of the extras are very welcome as with most DVDs these days.
Old? Maybe - Quality? Absolutely.
Only thing they could have done to improve this release?
It would have been excellent to release a version without that orchestrated soundtrack - I`d like to hear it without the overkill of violins et al.
posted by out4zero on 27/2/2001 08:11
7 / 10

If you were like me you rushed to see this film on its release in 1997, having been excited since you first saw that teaser trailer of the White House going bye-bye in the previous December. If yo were really like me you would have been a little disappointed by the film itself. I had hoped that some kind of plot would be adhered to, to no avail (A regular Apple laptop being compatible with the alien mother-ship, i mean come on!).
Still, i bought this on DVD when it came out on Region 1 (i line in the UK and didn`t want to wait!) and gave it another chance. Thankfully, my money was well spent. The added scenes help the movie along i think, and i had to laugh at the original ending sequence. There are enough extras to last you to the end of the world and if i could just figure out how to get into the hidden menu i`d enjoy it a whole lot more. The video and sound are great and, being from Fox, it`s overall presentation is astounding. Well worth the money.
posted by bigdave on 27/10/2001 06:20
9 / 10

After the disappointment with the region 2 copy, this was a breath of fresh air! The quality was what was expected of a THX mastered DVD (excellent sound and picture quality). It is worth getting if you are lucky enough to own a multi-region player.