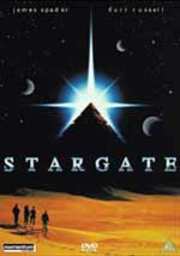 Synopsis:
When a mysterious woman makes Professor Daniel Jackson (James Spader) and offer he can`t refuse, he ends up in a secret Air Force military base. His mission: to decode an ancient Egyptian artifact known as the Stargate.

The mission leader, Colonel Jack O`Neil (Kurt Russell), a tough military man with nerves of steel, commandeers their trip through the Stargate to an ancient civilisation on the other side of the universe. But once there, they must battle the astoundingly powerful Sun God, Ra (Jaye Davidson), before they can find their way back home.

Stargate: Director`s Cut is a great sci-fi movie and a good DVD from Artisan Home Entertainment. This film has something for just about everyone.

Stargate is a thrilling and highly entertaining sci-fi/adventure movie, with a grand and epic feel to it and some very original concepts injected into the classic story of good vs. evil, or David vs. Goliath.

Originality. That`s a phrase that`s been strangely missing ever since in vocabulary of film makers, Roland Emmerich and Dean Devlin, thus making "Stargate" their finest hour, so far...

Kurt Russell does a fine job throughout as Colonel O`Neill, and comes across as something much more that just your stereotypical man of action, but for me, the one who really stole the show was James Spader as Professor David Jackson. Here`s a guy who`s played nothing but unsympathetic yuppie bastards ever since "Pretty in Pink" and "Less Than Zero", and with "Stargate" it looked like someone in Hollywood had finally made the startling realisation that he might in deed be what they refer to as an "actor", and can therefore play a wide variety of parts, be it naughty or nice, good or bad, saint or sinner. Wow. Can you imagine that...

Spader is absolutely perfect as Professor Jackson, and my sympathies are completely with him from the get-go. His frequent absent-mindedness and all of his little quirks just brings so much to the character, and he quickly becomes the one whose eyes you are seeing this incredible world through.
posted by Aslan on 19/8/2002 00:23
7 / 10

I sort of had great expectations from this movie, but upon watching it for the very first time (yeah, I know, it`s been a while...) - I wasn`t that impressed after all.
While the movie isn`t totally boring, it isn`t that captivating, either.
The video transfer is good. There are no compression signs and the visuals are adequate, taking into consideration the movie`s age.
The DD 5.1 soundtrack (and the weird DTS 2.0 soundtrack) is good. The surrounds are used throughout the movie and provide a rich sound envelope.
The menus are nicely animated with sound.
The extras include a commentary by the director and producer and a picture gallery.
Bottom line - a rather ordinary sci-fi movie with no exceptional qualities whatsoever. Rent once.
posted by Zvi Josef on 28/8/2005 02:25