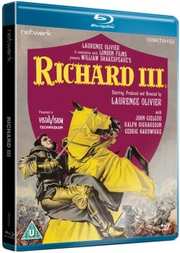 Synopsis:
Directed and produced by, and starring, Laurence Olivier, this iconic 1955 feature is for many the definitive film adaptation of Shakespeare's famous history play – a damning characterisation of the last Plantagenet king that has resonated through the centuries. Earning Olivier an Oscar nomination and BAFTAs for Best British Actor and Best British Film among numerous other awards, this star-studded adaptation features towering performances from his co-stars including John Gielgud, Ralph Richardson, Cedric Hardwicke, Claire Bloom, Esmond Knight and Stanley Baker. Richard III is presented in a brand-new Film Foundation High Definition restoration from original film elements in its as-exhibited theatrical aspect ratio.

Soon after Edward IV is crowned, his brother Richard, a hunchback whose disfigured body houses a twisted soul, begins scheming for the throne of England. He woos and wins the Lady Anne, then poisons Edward's mind against their brother, Clarence, later securing his death. But even after his coronation, Richard continues with his villainous campaign to secure his position as king...