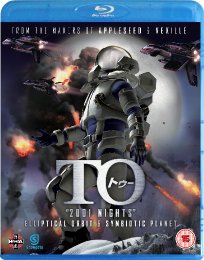 If Hayao Miyazaki can be called Japan's answer to Disney, then it seems appropriate to liken Fumihiko Sori to Pixar's John Lasseter. While Sori has had considerable success in the live action realm with films like Ping Pong and Ichi, among anime fandom, he's perhaps better known for his championing of 3D CG animation techniques, as opposed to the traditional 2D animation that Japan is so renowned for. What makes him stand out is that rather than go for the full 3D effect as in Pixar's movies, he tries to blend the 2D anime style with the versatility of 3D using cel-shading techniques. Sori served as producer on the first Appleseed film adapted from Masamune Shirow's work, and took over the directorial reins on the original sci-fi creation Vexille. Anime fans were licking their lips when it was announced that his follow up to Vexille would be TO, adapted from the 2001 Nights manga anthology.

2001 Nights is a collection of 19 unrelated stories by Yukinobu Hoshino that investigate the possibilities of human space exploration. This isn't the first adaptation to anime form, as in 1987, a 60-minute OVA called 2001 Ya Monogatari was produced based on one of the stories, although it has never been released in the West. Fumihiko Sori's TO adapts two other stories from 2001 Nights, Elliptical Orbit and Symbiotic Planet, and both are presented on this Blu-ray disc as one feature film (although you can watch them separately if you choose). It's followed the usual trail to get to the UK market, licensed and dubbed by Funimation Entertainment, then adapted for the Australian PAL market (in the case of the DVD) by Madman Entertainment, and then finally retailed in the UK by Manga Entertainment. 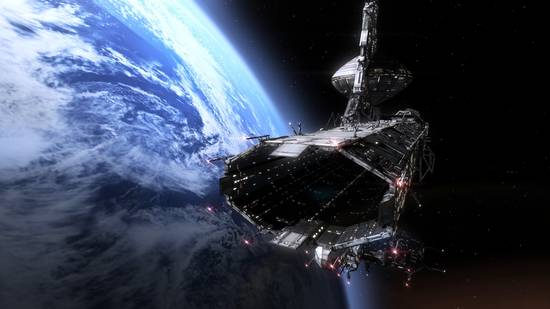 Dan is captain of the Midnight Bazooka, a vast space station orbiting Earth, whose prime duty is to launch transport pods to the moonbase. They also have to service passing ships, although the arrival of the Flying Dutchman raises a few eyebrows. Far from a legendary ghost ship, this Flying Dutchman is on an extended mission to Alpha Centauri, flying 15-year missions to bring back a cargo of liquid protons, fuel to keep an energy hungry Earth powered for years. Its captain Maria spends most of the mission in suspended animation, and ages less than two years out of every fifteen. Dan and Maria were close in a past life, but now Dan is an old man, and Maria is still a young woman. It makes for a fraught reunion, but that reunion is shattered when terrorists attack, aiming on using the liquid protons as a weapon to destroy the moonbase, killing countless innocents.

It's the 22nd Century, and mankind has finally discovered how to travel faster than light, opening up the galaxy to exploration and colonisation. It's about time too, as Earth's resources are pretty much used up, and it's time to give back to the mother planet. Alas, while technology has evolved, humanity hasn't, and while Earth may be licking its war torn wounds, the same rivalries and differences have travelled with humanity to the stars. On the fifth planet orbiting Beta Hydri, two rival colonies have been planted by the Eurasian nation and American Euro nation. Both compete to exploit and develop the planet, and a disagreement over water rights threatens to reopen the old conflict. While the war hawks on both sides continue to plan and plot, an American Euro bio-researcher named Ion has fallen in love with Alena, the daughter of the Eurasian leader. A Romeo and Juliet scenario may be averted by the arrival of a UN mediator, but events tumble out of control even so. As war looms, man's continued future on Beta Hydri may be determined by a bio-containment accident, and an act of sabotage. 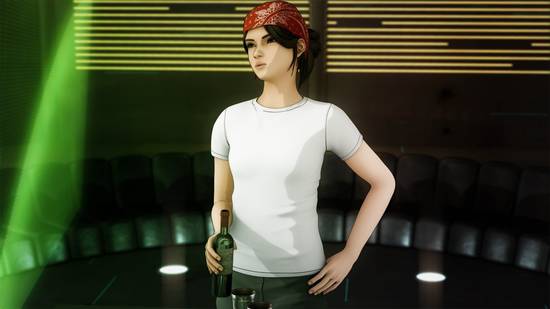 The 1080p 1.85:1 widescreen transfer on this Blu-ray disc is hard to fault. It's clear and sharp throughout, brilliantly bringing across the spectacular and imaginative imagery created for TO. These are high quality world and technology designs that simply shine given the high definition treatment. However, there are issues with aliasing and shimmer around fine detail, as well as slight colour banding, all of which happen in isolated moments and scenes. This leads me to suspect that this is a problem with the source material, not the transfer to Blu-ray.

Also, while the visual imagination, the world designs, and the various bits of technology and detail all look stupendous, the same can't be said for the human characters, who look plastic and unreal, and unable to convey the emotional intent apparent in the voice actor performances. Actually, given the experience with the Appleseed movies and Vexille, it's as if 3D character animation has actually taken a giant leap backwards in terms of quality and accomplishment. It's almost back to the early days of Japanese CG animation, in movies like A.Li.Ce and specials like Yuki Terai. It's all a massive detriment to the story, and is a disappointment given how much anticipation I had for TO. 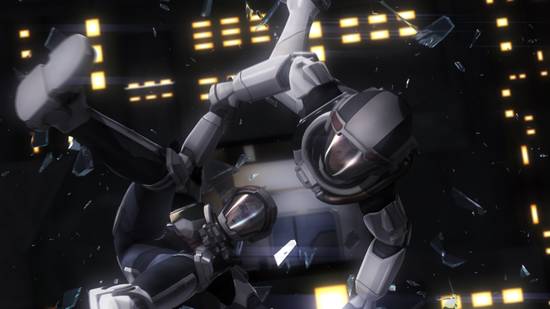 In what I think is a mistake, Funimation have repeated the same credit reel, that for Symbiotic Planet, ahead of both OVA episodes.

Audio comes in Dolby TrueHD 5.1 flavours, both English and Japanese. There's solid use of the surround to bring across the action sequences, and the music used in both episodes is eclectic and impressive. The dialogue is clear in both versions, and there's nothing really to complain about in terms of the sound. The subtitles are a white font with thin black outlines, which on one or two occasions did get lost when there was a white background.

The English dub is of high quality in terms of character and performance, but the age-old problem that got me watching foreign cinema in the original language in the first place, finally crops up in animation. Most anime is a matter of fitting the dub to lip flaps, which aren't exactly animated with any degree of accuracy. With the motion capture techniques used to animate TO, the lip movements are more detailed and more closely match the Japanese dialogue. When it comes to the English dub, the number of syllables and the timing may be correct, but the mouth shapes don't always match the sounds. 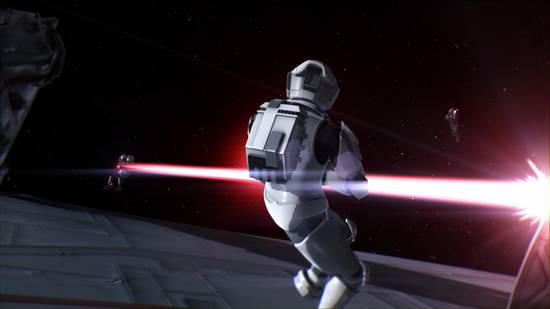 TO does pretty well for extras, presenting its content with a very nicely animated menu. You'll also find a whole host of trailers for the episodes, promo videos, and TV Spots, all presented in SD format.

The meat of the extras are the special interviews, two of them, running to 30 minutes each in HD. The first concerns Elliptical Orbit, and has Fumihiko Sori, the director, interviewed separately from voice actors Akio Ohtsuka (Dan), and Romi Park (Maria). The second follows the same format, and recorded separately from the director this time are voice actors Aya Hirano (Alena), and Jun Fukuyama (Ion). There's some interesting material here from the director regarding the stories and why he films with CG animation. The actors speak more about their characters and their perceptions of the story that they worked on.

Finally there are Madman Trailers for Evangelion 2.22, The Girl Who Leapt Through Time, and Summer Wars, all of which are Blu-rays that Manga Entertainment have coincidentally released in the UK.

As mentioned before, the first drawback to this release is the 3D character animation, as the character designs are simplistic and lack detail, and their ability to convey emotion through facial animation is almost non-existent. If you can get past that, you can appreciate the stories for what they are, but alas we run into problems there as well. 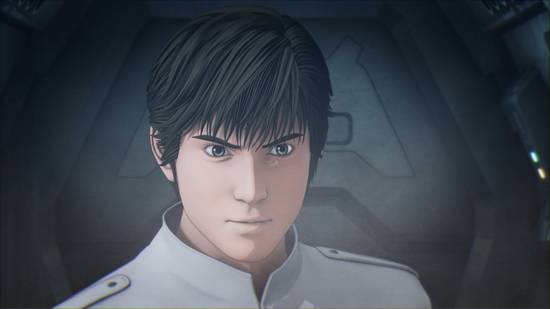 This is the stinker of the collection, a poorly executed tale that relies much on cliché and half-developed character tropes. Dan is the grumpy and aloof base commander. Maria is captain of a spaceship running 15-year missions to Alpha Centauri and back, with a mostly male crew under her command. So naturally she's a slut who sleeps with every member of her crew. This annoys Dan for some reason. But half-baked character development aside, what really annoys me about Elliptical Orbit is its complete ignorance of the science bit of science fiction. The reason why Maria doesn't age on her trips to Alpha Centauri is because of time spent in suspended animation. There's no mention of time dilation. You can forgive the sound in space cliché, and the liquid proton maguffin, but even in zero-G people act like they are under the influence of gravity, all sharing the same orientation in free-fall, ducking during a laser battle. And the most groanworthy moment is when a couple of characters jump out of a space station window, shattering the glass. I don't want to be in a car with glass that fragile...… a space station? There's no emotional investment in the story, the characters or the action sequences. It isn't the most original story either. If you want to see it done right, watch Makoto Shinkai's Voices From A Distant Star. 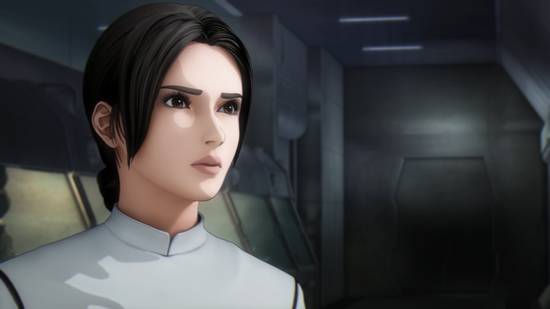 This is a whole lot more satisfying a story, although you do have to work through that disappointing character animation once more. For one thing, it's a planet-bound story, which means that there are no dodgy space physics for the filmmakers to ignore. Also the tale of a couple of star-crossed lovers caught up in-between two warmongering colonies has a universal appeal to it. The characters feel more rounded and realistically written, and there is an impressive sense of wonder and imagination with which this alien world is created. I'm sure there is also a nod to Star Trek, calling one of the alien species inhabiting this world Picards. I found there was a lot to appreciate about this tale of human conflict in an alien environment, and a unique solution to that age-old problem, when that alien environment forces the human colonists to adapt and evolve. There is a lot more originality and imagination in this story, which easily makes it the preferable of the two OVA episodes on the disc. 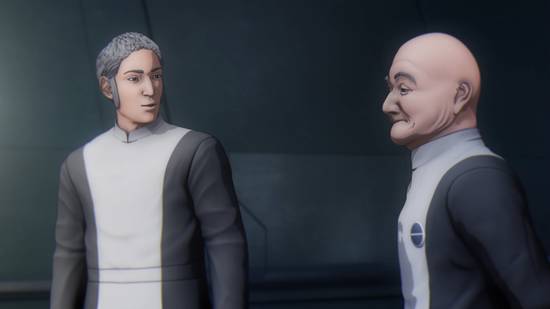 It's not just the animation. I mean, technically speaking, TO is more accomplished than Vexille, and Vexille was in turn more impressive than Appleseed. It may be that the pace of advancement hasn't kept up with the mega-budget Hollywood productions, as certainly recent US animations and movie special effects have shown that it is indeed possible to convey a wealth of character, even through a computer generated image. While the motion capture work used to translate actor performances to the screen in CG animations like TO is superb, the final touch to make those CG translations look natural to the eye is missing. What that lineage of Japanese CG animation shows is that it is the story that is paramount when it comes to making these films succeed. Indeed it's the most primitive technologically of the lot, Appleseed, which has the best story, and is the easiest to engage with. The story for Vexille was weaker, even when the animation was better. TO's story is weaker still, at least in the case of Elliptical Orbit, and I was sorely tempted to switch off and give up on the whole thing. Fortunately, Symbiotic Planet is strong enough to make watching the disc worthwhile, although it isn't exactly cutting edge sci-fi. 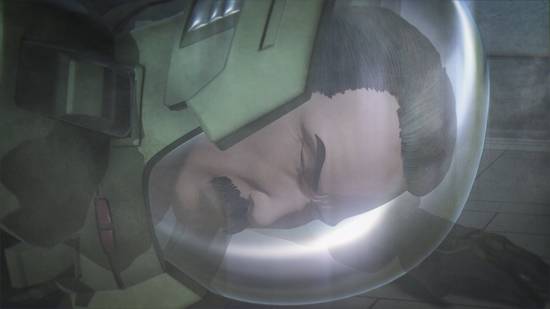 TO or 2001 Nights is one of the discs that you own for the spectacle, for the fact that it does something different, and that it is something of a landmark in Japanese animation history. That doesn't mean that it will regularly see the inside of your player. Perhaps when the Japanese CG animation industry is mature and productive enough, you'll be able to pick and choose.