MVM aren't as prolific when it comes to releasing anime as they once were, but they certainly haven't abandoned the UK market, and given some of the titles they have released in the past, I make certain to sit up and pay attention when they get around to announcing something new. I'll admit that I wasn't immediately thrilled when they announced that they would release the Ikki Tousen sequel this year, although it is supposed to be the best of Ikki Tousen…

But then MVM said that they would have something for the end of 2011, and dropped quite a few tantalising hints as to what it could be. They planned to have the big announcement at October's MCM Expo, but yet again, they've had their thunder stolen. I think it was NEO magazine that did it the last time as well. Anyway, MVM will be releasing Welcome to the NHK in the beginning of 2012, and for once, crossing my fingers, scrunching up my eyes, and bouncing on my toes muttering 'Please, please, please' has paid off. We almost had NHK back in 2008, as ADV were preparing the way for its UK release. But then they went bust. A couple of months ago, it finally got its Australian PAL release courtesy of Siren Entertainment, which means now we in the UK can get it too. Still, better late than never! (And in 2008, we would have gotten an NTSC-PAL conversion, now we ought to get native PAL)

Welcome to the NHK is the black comedy that focuses on the life of the NEET shut-in Sato, who's been locked away in his flat ever since an awkward social encounter, and whose paranoid belief that the television networks are conspiring to keep him a jobless, social recluse by feeding him a constant diet of cute anime girls is increasing his isolation. Then one day he encounters a young girl named Misaki, who knows a little too much about him, but promises to cure him of his problem, and then things start getting really weird.

Welcome to the NHK's examination of the ills of modern society, and its sharp observation of otaku culture may on occasion cut a little too close to the bone for anime fandom, but that in turn makes it one of the best, and one of the most unique anime shows in recent years. If there is any justice in the world, it should sell megabucks for MVM.

Despite an attempt to indoctrinate myself earlier this year, giant robots in anime still aren't my scene. But who am I to deprive you of their wonders and thrills? So when I saw on Anime UK News that Sunrise were streaming the first three Gundam movies to the world on Youtube in their entirety, I only debated a day or two before deciding to share the news. 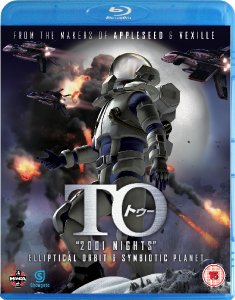 One anime review last week, if you can call it that. 2001 Nights is a 3D CGI animation from director Fumihiko Sori, who was also behind the similarly produced Appleseed and Vexille. Also called TO, 2001 Nights uses motion capture to get its actor performances, and creates digital models of its characters based on the motion capture, inserting them into whatever digitally created environment is required to tell the story. Traditional 2D anime this ain't! 2001 Nights is an anthology of manga stories that look at human space exploration over the space of a couple of hundred years. TO adapts 2 of these stories, Elliptical Orbit and Symbiotic Planet to the digital screen. Elliptical Orbit sees an unconventional reunion interrupted by terrorists, while Symbiotic Planet gives us a Romeo and Juliet story on an alien world where two competing human settlements come to the brink of war. The jury may still be out on these 3D digital animations, but there's no denying that 2001 Nights looks pretty, especially on Blu-ray.

Manga Entertainment release 2001 Nights on Blu-ray and DVD on the 26th of September. And MVM release Welcome to the NHK at the beginning of 2012. Yahoo!