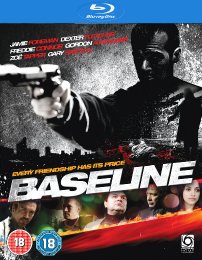 Synopsis:
A fierce and contemporary urban drama, Baseline tells a story of love, loss and loyalty. Charting the rise and fall of Danny (Freddie Connor) as he tries to build an empire for himself on the East End club scene, it's a provocative insight into the brutal realm of gang rivalry. Working as a bouncer at The Baseline, the popular grime club, Danny is used to breaking up fights and managing drunken kids, but is abruptly hurtled into the underworld he has tried so hard to avoid when he rescues Terry (Jamie Foreman, Layer Cake, Oliver Twist, Nil By Mouth), the club owner and local gang leader, from a hit man. His loyalty earns him a quick promotion to club manager but only with the Faustian condition he first turn a blind eye, and eventually actively participate in, the bleak deals being done off the dance-floor by Terry's number 2, Joe (Dexter Fletcher, Lock, Stock and Two Smoking barrels). After meeting a beautiful nurse, Jessica (Zoe Tapper, Desperate Romantics) he attempts to break free of Terry's grip by setting up on his own, but he soon finds out there's no such thing as a clean slate when his best friend Paul (Gordon Alexander) is released from jail with a grudge against Danny and a debt to Terry he cannot possibly repay. Danny soon has to make the ultimate sacrifice when he has to choose between loyalty, morality and his last chance for freedom.