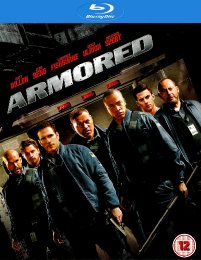 The heist has been a part of film for almost as long as cinema has existed, normally as part of a gangster movie where a charismatic antihero makes off with the bank's money, distinguishing their money from yours. There are also heist movies set entirely around the job and, with a few exceptions, these are set in banks and have made for some great movies including Dog Day Afternoon, Inside Man and Heat. There aren't many that involve the armoured cars transporting the money to and from the banks and most people, if they had to name one, would probably go for The Italian Job. Armored is the latest of these, the first is probably The Armoured Car (1950), and involves a team of armoured car personnel who decide to fake robbery and make off with the money themselves on the busiest day of the year, when millions of dollars is transported from the Federal reserve to banks around the country.

In order for a heist movie to succeed, there has to be a certain plausibility in both the plan and the characters. The people need to be believable and you need to be convinced that they would go through with such an audacious plan. This isn't a problem if you're dealing with a group of hardened criminals, but when the gang are six law-abiding citizens who spend their life protecting money, you really need convincing that they will throw their careers away and risk imprisonment for the almighty dollar. The emotional heart of Armored is Ty Hackett, a decorated former servicemen who is now a rookie on the job, struggling to support his younger brother after they've both been left almost on the breadline due to their parents' death. Ty is part of a close-knit group is one of them, Mike Cochrone, is his Godfather and Cochran just so happens to be the brother-in-law of another in the group. With the bank threatening to take his house and his brother Jimmy in trouble with the welfare officers, things aren't good for Ty. 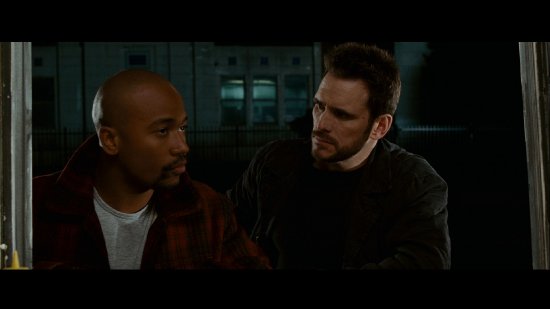 Early on in the movie, he is initiated when the rest of the gang plan a false attack on the van and they get a good laugh at his reaction to the 'bomb' planted on the back doors. One night at a hot dog stand, Mike tells him about what will happen the next day and that they will be carrying $42 million in hard cash. All they need to do, he says, is pick up the money, stash it somewhere and then pretend that they had been 'jacked'. He then asks Ty if he's in or not. Thinking of his brother, Ty reluctantly accepts as long as no one will get hurt. The next day, and Ty is still having second thoughts but Mike again reassures him, and indeed promises him, but no one will be hurt so the six men, in two vans, head to the LA Federal reserve where they pick up the $42 million, call in and then hit the open road. With an hour before they have to call in again, they pull into an abandoned steel mill where they began unloading the money but then one of the realises that there was someone else in the factory and they chase down an old man who is living rough there. When tempers fray and the guy begins to run, he is shot in the back and seriously wounded and Ty, finding it hard to leave honest life behind, wants to take him to hospital but Mike coldly shoots the old hobo through the head.

At this, Ty decides he can't take any more and locks himself in one of the vans with half of the money. This puts the other five members of the crew in a difficult position as the vans are specifically designed so you can't open the doors. Following a brief chase, one of the alarms goes off and alerts a sheriff who was enjoying a hot dog at a nearby food stall. When he goes to find out where the alarm was coming from, he can also hear some rhythmical banging -- the crew trying to remove the hinges so they can get into the van and sort out Ty. As if things weren't bad enough with one of the gang having second thoughts, this intrusion by a law enforcement officer ensures that things go from bad to worse. 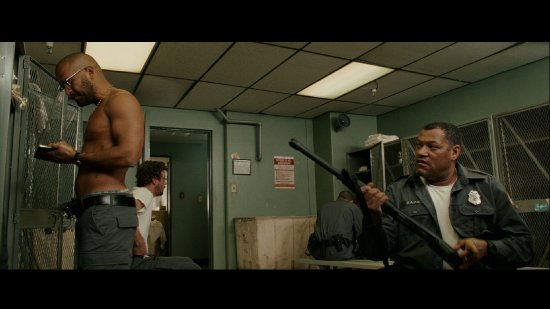 As I've said, you really need to be convinced that every member of a renegade crew is in on the deal and I just didn't believe Ty was convinced. He always seemed certain to be the first to break ranks and, as he was given the full back story and home life, you just know where his character arc is going to finish. The whole organisation also seemed utterly preposterousness and ill thought through. Why did Mike wait until the day before the heist was due to take place before recruiting Ty? Did he really have a backup plan for Ty said 'no'? Why did no one scout out the location to make sure that it was safe, remote and empty? If I could think of these things when watching the movie, shouldn't these be things that would have been fully considered by the gang beforehand? In order for a heist movie to properly involve you, you need to believe that the thing that goes wrong is completely unanticipated and could not have been prepared for in any way, shape or form.

Once the 'meticulous planning' breaks down, you're almost in Reservoir Dogs territory, with the gang in an abandoned mill struggling to come to terms with what has gone wrong and what they can do about it. The problem that Armored has is that it isn't written with the wit, depth or intelligence that Tarantino's breakthrough movie had. Although the acting from the likes of Jean Reno, Laurence Fishburne and Matt Dillon is very good, they all seem to be a bit restrained and I'm not sure if this is a problem with the script or whether the film had to be toned down to get a PG-13 certificate in the US and a 12 certificate here. I would expect men in that situation, especially former military men, to use much more colourful language and be far more violent than Ty, Mike and the rest of the gang are here.

Armored is fairly brainless rubbish as, if you think about it logically as I did, the whole film falls apart so it almost relies on the viewer to locate the 'off' switch somewhere in their cerebral cortex and flick it before pressing play. There are moments of fairly high tension when the stresses and strains of the situation get to the gang members and it's almost a situation of not how will they get away with the money, but who will be left to get away with the money.

Extra Features
The audio commentary is a real missed opportunity as, if you are to make a list of the people you wanted to hear from, I doubt that one of the producers and two of the actors in minor roles would be top of your list. Still, Milo Ventimiglia and Skeet Ulrich do a decent job of providing some information and coaxing other titbits from the money man but the whole thing is far too gappy, with the three of them content to sit back and watch the film for long periods.

There are three different featurettes, thankfully all presented in high definition which look at different aspects of the filmmaking process. These come very close to EPK standard but are of decent length and show you how the stunts were done, the level of detail that went into the costumes and props and how the whole film was made. There is much information in these three featurettes as in the entire commentary and done in less time.

Making the commentary more revealing is the movieIQ feature which uses BD Live to bring up a box on the right-hand side where you can look through the cast and crew filmographies, see what music is playing in the senior watching and a whole raft of trivia.

There are also two trailers. 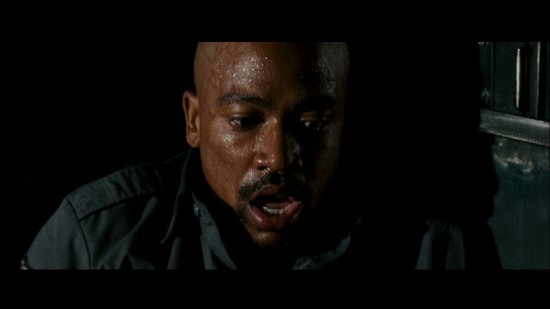 The Picture
For a film as action oriented as this with some high-speed car chases, you need a picture without smearing, edge enhancement, moiré and that's exactly what you have. HD really does Laurence Fishburne no favours as, in close-ups, his face makes a golf ball look smooth! Skin tones are all very good, colours are natural and contrast levels are particularly deep, this is particularly important as much in the film is dark as it is predominantly inside an abandoned steel mill with almost no natural light.

If the movieIQ trivia is anything to go by, the filmmakers are particularly impressed with the car chases, or van chases to be precise, and there is one just over half an hour in where Ty makes a run for it and the 12,000 pound beasts hurtle around the factory, smashing into all manner of things, including each other, showcasing how well built the armoured cars are.

The Sound
The one part of the disc that really impresses is the magnificent DTS-HD Master Audio 5.1 soundtrack that is beautifully balanced with crystal clear dialogue, a really impressive score by John Murphy, and surrounds that helps to build the tension and really come into their own when you have a car chase or another action oriented scene. Without such an impressive soundstage, the film would be found wanting and some scenes would be fairly poor -- this shows how much good sound design, an evocative score and well mixed soundtrack can help to lift a rather mediocre movie.

As usual for a disc from Sony Pictures Home Entertainment, there are a fine selection of soundtracks and subtitle options. 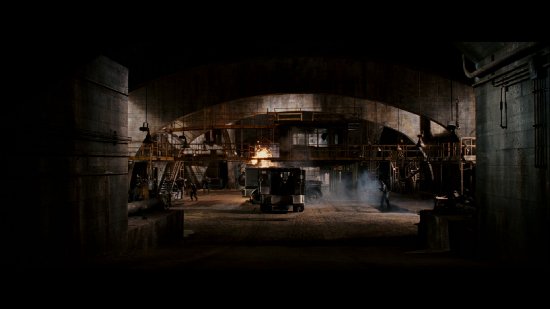 Final Thoughts
Armored is a distinctly average heist movie and there are loads of better crime thrillers out there but this is one where you can leave your brain on standby and take the film for what it is. Matt Dillon is an accomplished actor and he is on fine form here, as is Laurence Fishburne who looks suitably menacing. You also have Jean Reno who is an odd addition to an all-American cast but then you also have an actor who choreographed one of Britney Spears' World tours and shows his flexibility when scampering around the scaffolding.

SPHE normally put together decent discs and this is no exception with a reasonably good extras package and excellent picture and sound quality. The movie is no great shakes, but it is a fairly entertaining watch as long as you don't try and think about it too much.