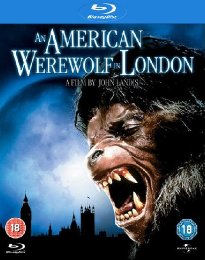 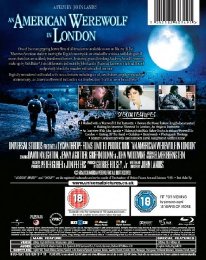 An American Werewolf In London Back Cover

An American Werewolf In London

John Landis was known as a comedy director when he set out to make this werewolf movie, having helmed Schlock, Kentucky Fried Movie, Animal House and The Blues Brothers. Firmly embracing lycanthrope lore, the film begins in Yorkshire where a couple of American tourists have delayed their trip to Italy to travel around the UK. Finding themselves freezing cold and in the middle of nowhere, they find a tavern, The Slaughtered Lamb, where they annoy the locals by asking about the pentagram drawn on the wall and are met with such a frosty reaction that they decide to leave. Warned to 'beware the moon and stick to the path', they get lost on the misty moors and are tracked by a creature that attacks and kills one of them, Jack, and leaves the other, David, injured.

Waking up in a London hospital, David is confused that the official report cites that there were witnesses to him being attacked by an escaped lunatic and starts having vivid dreams of running through the woods and attacking wildlife. If this wasn't bad enough, Jack appears and tells him that he is a werewolf and must kill himself to enable Jack to move on from his undead state. Convinced that he's imagining all this, David starts a relationship with attractive nurse Alex and moves in to her flat when discharged. 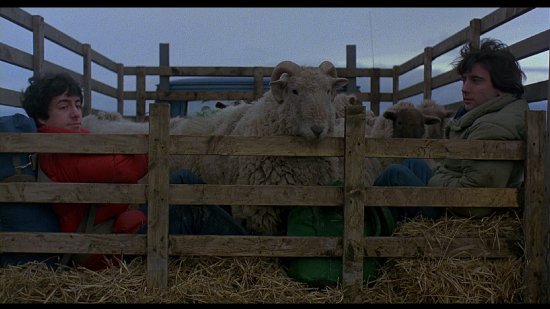 However, when the full moon comes, Jack's warnings prove all too accurate and David transforms into a werewolf, kills six people and wakes naked in the zoo without any memory of the night before. Meanwhile, the doctor at the hospital, who was suspicious of the police report, travels to Yorkshire to investigate.

1981 was a great year for werewolf movies and I say this with the utmost respect for Joe Dante's The Howling, but An American Werewolf in London was the best. Primarily a horror film with incredible special effects by Rick Baker, it is also laced with jet-black humour and some great scenes that have been re-used so often that they are now cliché - I'm thinking specifically of the dream within a dream and the angled mirror to create a jump on the reveal. The main cast are terrific, with David Naughton and Griffin Dunne putting in fantastic performances in their first major roles and John Woodvine and Jenny Agutter brilliant, as you would expect. The British casting for the Yorkshire scenes (actually shot in Wales) is tremendous, with Brian Glover doing his professional Yorkshireman thing and even a young Rik Mayall appearing in a non-speaking role. 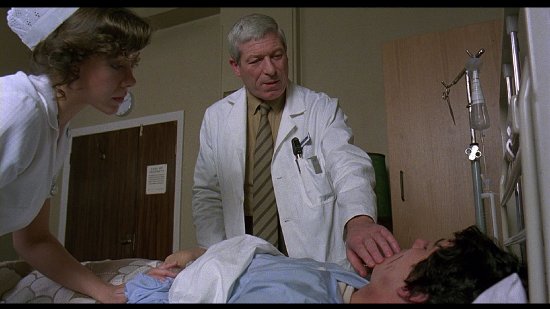 The Sunday Times said that 'The gear changes of tone and pace make for a very jerkily driven vehicle' and Roger Ebert, though impressed with the 'spectacular set pieces', though that the visual effects were to the detriment of 'character development, or an ending'. How wrong they were. As with so many horror films, it's a case of revisionist critics realising how good and groundbreaking the film was and that those who were in the cinemas at the time failed to grasp how good the film is that they were watching. John Landis was way ahead of the curve because, at the time, no-one had put comedy into horror films so critics were not expecting the humour and didn't think the combination worked - though it seems that the trend has continued in a way that proves Landis was right and the critics were wrong.

When it needs to be, this is bloody and scary with other scenes lighter and humorous in a great blend of horror and comedy that has made it a fan favourite for nearly three decades and a film that picks up new admirers every year.

Extra Features
Most of these are taken from the excellent 25th Anniversary Edition DVD release and begin with the commentary by David Naughton and Griffin Dunne. It's a shame that John Landis didn't do anything especially for this release but the amount of material that he's done in the past is exceptional and he'd probably only be repeating himself with a commentary or new interview. The two actors start off well but the longer the film goes, the more dead air there is as they weren't involved in the technical aspects of the shooting process and there is only so much you can say about the make-up. What they do say is interesting but it isn't the most enjoyable commentary track ever recorded and a moderator was desperately needed.

The feature length documentary Beware the Moon by Paul Davis, obviously an über-fan of the film, doesn't have the gravitas of those made by Mark Kermode but is a well written and presented piece containing interviews with everyone that matters. It follows the making of Werewolf from its conception on the set of Kelly's Heroes, through the shoot right up to the test screenings and critical reception. This is the best feature on the disc and you will glean as much from this as the commentary.

Also included are several older and shorter featurettes, some from the publicity stage, such as the original Making Of which is as much a publicity piece as anything else. There are decent interviews with Rick Baker across two different featurettes - one of them brand new and presented in HD - which do duplicate material and a piece with John Landis from many years ago that doesn't add anything from what he divulged in the Beware the Moon documentary.

Rounding off the set are some trailers, a gallery, storyboards and a photograph montage. 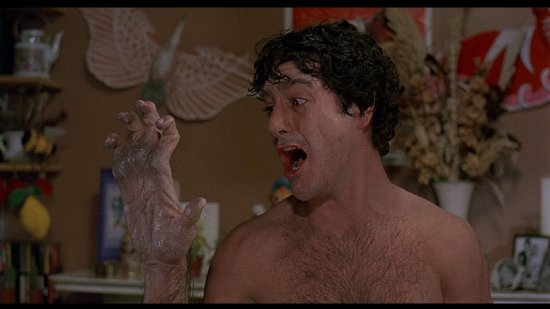 The Picture
The 1080p picture is superb, they haven't gone overboard with the DNR and there is some graining throughout, particularly in the wide exterior shots, but I'd much rather have it look this way than waxy and artificial. The colours and contrast are excellent, probably of the standard that you'd have seen in theatres in 1981. The blood is bright and the night time scenes are clear with good definition.

Rick Baker virtually invented special effects make-up, though great practitioners like Dick Smith and Stan Winston had been doing similar things years before. Awarded an Oscar for his work on the film, Baker's prosthetics and make-up are still impressive all these years on and the amazing transformation scene is still powerful, beating anything that CGI can do.

The Sound
The DTS-HD Master Audio soundtrack is beautifully balanced with clear dialogue and excellent use of the surrounds making the wolf attacks as terrifying as they can be - the scene in which Jack is killed retains its power to shock with the blood, quick cutting and Dunne's superb performance pleading for his life.

The scored music by Elmer Bernstein is used sparingly but effectively with Bad Moon Rising by Credence Clearwater Revival and three different versions of Blue Moon really well placed - each have their own qualities and the mournful tone of Sam Cooke's rendition really complements the pain of the transition scene perfectly. 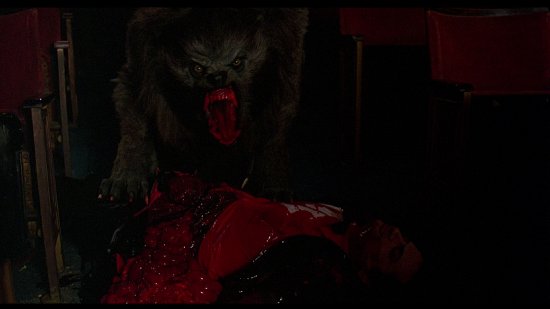 Final Thoughts
I never tire of watching An American Werewolf in London and though there are some superb lycanthropic films around, this is by far my favourite. This Blu-ray release has excellent AV quality and a fine array of extra features that will keep you busy for several hours. If you own the 25th Anniversary Edition, it's still worth upgrading for the improved AV package and slightly more extras, especially the excellent Beware the Moon documentary, but if you don't already own this, it's as close to a 'must buy' as you can get.