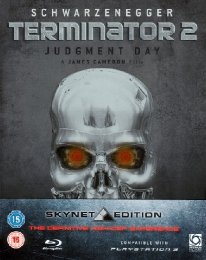 All other versions have been terminated...
Review added by
Rich Goodman
Places to Buy 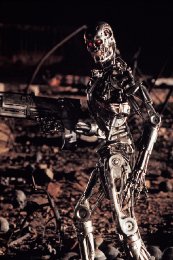 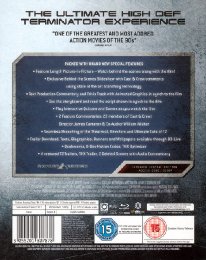 When this disc was released back in 2009, it rapidly became the manhood comparison disc for Blu-ray owners. Just how long does it take your player to get to the main menu screen of the Skynet Edition? When I bought the disc, I was intending to start the review with an admission of inadequacy, but since then, that player expired, and the replacement now gets everything loaded in a pretty nippy 3 minutes. 3 minutes? Indeed, the Skynet Edition of Terminator is such an awkwardly authored, Java mess of a disc that I could load ZX Spectrum games from tape quicker than this disc boots.

I also realised just how poorly it’s authored, so packed full of useless nonsense and gimcrackery when I ran into problems with the disc, notably sound sync issues. On my player it’s a simple matter of stopping the film, going into set-up, and trial-and-error-ing with the delay function to get things synced up. Except the first time I tried to stop the film, the player crashed. Unplug and replug and then the second time I stopped the film, I learned that not only doesn’t the player hold the film’s position in memory, but it boots the disc up from the beginning when you press play. So each iteration of trial and error to find the perfect delay takes three minutes and more. I haven’t even started reviewing the disc yet, and I already want another version of Terminator 2 that just plays the misbegotten film, with none of this faffing and fannying around.

Set 10 years after the events of Terminator, the sequel continues the story, as Skynet makes another attempt to change the future by eliminating its key threat in the past. It’s sent a shape-shifting, liquid metal T1000 Terminator back to kill John Connor as a child. But just as before, the resistance have sent a protector back to the past as well, only this time it’s a captured and reprogrammed T800 Terminator. With this new knowledge from the future, Sarah Connor and her son actually have the chance to stop the nightmare future of Judgment Day ever coming to pass.

The original film with added character beats, for Sarah who gets a Kyle Reese dream sequence, for the T1000 to show some more of his bad-assness, a bit of downtime at the family Dyson, and the neural net chip scene with the T800, which leads to added touchy-feelies between a boy and his killer robot.

The infamous future coda ending replaces the original ending in this version of the film. Accessible by the code printed on the back of the Amaray sleeve.

Terminator 2 gets a 2.35:1 widescreen 1080p transfer that is pretty good. I haven’t seen this film look so impressive since I saw it in the cinema. The image is clear and sharp, the colours are strong and vivid, while there is so much more in the way of detail than I have seen before. The film is stable throughout, and there’s little in the way of age or print damage. The fly in the ointment is the DNR, with the film practically scrubbed of grain to the point where skin tones, facial detail is subdued and uniform. Terminator 2 looks great to watch, but it could have been much better.

No such problems with the audio, which gets a beefy DTS-HD MA 6.1 Surround English track, delivering the action, and Brad Fiedel’s iconic soundtrack, with an unprecedented degree of immersion. It’s a thunderous, impactful audio track, which still manages to keep the dialogue clear, although I do find that the 90s slang is dating this film. You also have a DTS-HD Hi Res 5.1 French track, a DTS-HD MA 7.1 German track, DD 2.0 Headphone tracks in English and German, with subtitles in these languages and Turkish.

Incidentally, if you’re watching on a Panasonic SA BTT490 Home Cinema, a delay of 40-50 milliseconds will get everything relatively synced up. I’d be more exact but that would involve me going insane and throwing my player out of the window in sheer frustration with the disc.

It takes soooo long to load, and the menu is soooo laggy! I feel like I’m playing Streetfighter II on my Spectrum again. Seriously, a disc that crashes the player if you press the stop button is not a good thing in my view. But yes, tonnes of flashy Java graphics, animated menus etc, etc.

And surprise, surprise! The Interactive Modes (the menu headings are the type of technobabble that you need translated), on Special Edition only, don’t work with my player. I can click on them, certainly. They get highlighted, but nothing happens with the player. I might expect problems with the Picture in Picture content, but not even the text trivia track, nor the text commentary switch on, although I can turn those on manually with the remote, flicking through subtitle options during playback. So I’m shut out of the Picture in Picture content, the shot methodologies, the seamlessly branched extra content, the screenplay and the storyboard, and the quizzes.

There are extras that I can access outside of this, the trailers, a couple of deleted scenes (restored in the Extended Special Edition), and two audio commentaries. But after half an hour of trying to get something, anything to work with this disc, my heart wasn’t in exploring it any further.

The early nineties was when the fad for extended editions and directors’ cuts really took off, with classic film getting the once over, and newly released films getting another lease of life with alternate versions on home video. Directors like Ridley Scott would tweak around the edges, make small but meaningful changes, and in some cases come up with revised versions tighter and even shorter than the theatrical releases. Then there were the James Camerons of the world, who would stick everything that they had to cut out, back into the film, creating the celluloid equivalent of bloatware. Once upon a time I would have appreciated these versions as they told even more of the story, and filled in character background. But in recent years, I’ve come to see them as directorial indulgence, and rarely is there the impression that bigger is better. That’s what film novelisations are for.

Terminator 2: Judgment Day has declined in my estimation as the years have passed. It’s just not as good as the original film, although I appreciate that it tried to do something different from the original b-movie action thriller, and instead create a genuine work of sci-fi, one that comments on the human condition. But the original Terminator was a perfect movie, an efficiently put together cyberpunk chase movie that delivered an adrenaline fuelled thrill ride. The theatrical version of Terminator 2: Judgment Day is almost as entertaining. Certainly the bigger budget, the cooler effects still stand out today, and the time travel shenanigans of the story give it a stronger narrative core. Of course the action is excellent, and Sarah Connor the soldier is as interesting an extrapolation of the character as was Ripley in Cameron’s Aliens, both definitive female action heroes. The biggest problem with Terminator 2 is a middle act that sags, with young John Connor teaching the T800 all about humanity, while hanging out in the desert. You almost forget there is a T1000 after them. And after all this time, and having watched the film more times than I can remember, the John Connor T800 shtick just seems more corny than cute. It’s still a decent film though.

I liked the Extended Edition on DVD, but not so much now. If you agree with me that the middle act of T2 can sag, then it’s even worse here. What the added scenes bring to the film in terms of extra story, they more than take away in terms of dragging down the pace, and while there is more of a cohesiveness to the film, looking at the Terminator’s neural chip and how it relates to Cyberdyne, it does result in extra corniness with the Terminator now becoming a student of human behaviour. And quite frankly, the movie doesn’t need this.

They should have kept the future coda ending though. Not because it’s a good ending; it’s most definitely not that, with dodgy old age make-up and inconsistent in tone with the rest of the film. But it is a definitive end, and with it, we would have been spared T3, Salvation, and Genisys.

Y’know, life is too short, and I’m just too cranky to put up with the god-awful authoring on discs like this. I still have the Ultimate Edition DVD, and yes, it only has the extended edition, and yes, the 576i image drops down to 480i upscale for the extended scenes, but watching that disc is painless, and I’d much rather do that, than deal with the Terminator 2: Skynet Edition Blu-ray again. On top of that, the DVD has its extras on a separate disc, loads of them. High definition video and audio are splendid things indeed, but the thing’s got to work. Terminator 2 is a film that I’d double dip for on Blu-ray, as long as it’s a simple disc, with the film on in as good a quality as possible, a disc that doesn’t feel like it’s been put together by less than an infinite number of monkeys.

The original film Terminator was great, but found all the sequels were just variations of the first.

The second film was just tolerable but the third film was really dross. Its a pity really, as I love Si-fi but it is difficult for sequels to deliver unless they extend and vary in some form from the original.

Another Si-fi trilogy that does the exact same blurring together is the Matrix, as the first is brilliant but the rest is just a variation of the same thing.

Worst of all is Back to the future, where there is no difference between any of the three films, even using the same actors, it is unfortunately a major problem of sequels.

But....Trilogies can breaks this trend of similarity, by being more inventive being in a similar story arc as the first , but more constructive in the sequels, Alien comes to mind, as the first is a scary story, the second is more or less a war film and the third is a prison story, even the fourth was more of an adventure in space story (so not quite a trilogy).

Another good example was Starship trooper, where the first was a gung ho war film, the second a confined scary story, the third a Mauders fighting machine.

So in conclusion, some trilogies work as they stand as individual stories, but others just blend and blur in to the one overall movie, and unfortunately Terminator is one of those that just blurs.

Of course, this is just my opinion of good and not so good Si-fi trilogies.
posted by bandicoot on 20/5/2016 23:15
The second is that rare instance of a movie that beats the first! Amazing effects, brilliant long action sequences, and for a movie with such obvious CGI elements, very little CGI.
posted by RJS on 24/5/2016 08:15