Terminator 3: Rise of the Machines arrives in May 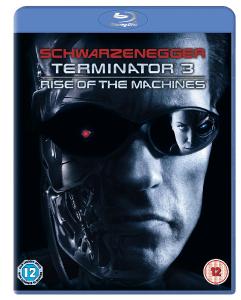 Terminator 3: Rise of the Machines
Available to buy and rent on Blu-ray disc 25th May
Available for the First Time in High-Definition with Exclusive Blu-ray Added Value including Picture-in-Picture "Terminator Vision"

Arnold Schwarzenegger (Terminator, True Lies)  is back as the ultimate cyborg assassin for another explosive, action-packed ride in Terminator 3, but this time he's taking on Skynet in High-Def! This global smash-hit blasts onto screens on Blu-ray Disc on May 25th  2009, looking better than ever and including exclusive special features and interactive content. The Picture-in-Picture "Terminator Vision" gives fans the chance to join Director Jonathan Mostow (U-571) as he takes them on a Behind-the-Scenes tour of the movie, whilst the cinechat feature lets viewers interact with each other as they experience the enhanced visuals and sound that only Blu-ray can deliver!

A decade has passed since John Connor (Nick Stahl) helped prevent Judgment Day and save mankind from mass destruction. Now 22, Connor lives "off the grid" - no home, no credit cards, no cell phone and no job. No record of his existence. No way he can be traced by Skynet - the highly developed network of machines that once tried to kill him and wage war on humanity. Until... ...out of the shadows of the future steps the T-X (Kristanna Loken), Skynet's most sophisticated cyborg killing machine yet. Sent back through time to complete the job left unfinished by her predecessor, the T-1000, this machine is as relentless as her human guise is beautiful. Now Connor's only hope for survival is The Terminator (Arnold Schwarzenegger), his mysterious former assassin. Together, they must triumph over the technologically superior T-X and forestall the looming threat of Judgment Day...or face the apocalypse and the fall of civilization as we know it.

The Blu-ray Disc version of Terminator 3 is BD-Live™ enabled, allowing users to get connected and go beyond the disc via an Internet-connected Blu-ray player. Download exclusive content, register for rewards, give feedback through our survey and more!