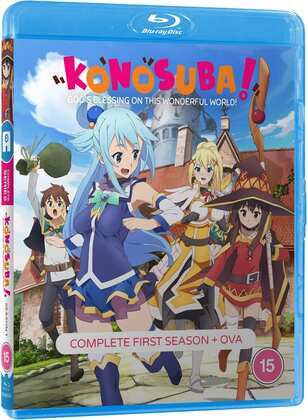 I spent money on a genre of anime which, while I don’t exactly hate it, I am getting royally tired of. I’m talking about the ‘lost in a fantasy world’ isekai genre, which seems to be Manga/Funimation/Crunchyroll’s raison d’être these days. Konosuba Season 1 comes from Anime Limited though, and it’s a parody. When you tire of a genre, what better than to just send it up? An otaku geek dies ignominiously one day, but in the afterlife he gets a third option besides heaven and reincarnation. He can manifest with his old body and his memories intact in a fantasy world. But he manages to take the goddess with him into his new life. And he may be a fully experienced games master, but he winds up in the dullest corner of the world, and the only recruits he can get to his ‘party’ are the last people that he would want. Konosuba may be a genre that I don’t like, but few anime have made me laugh as much as this one. 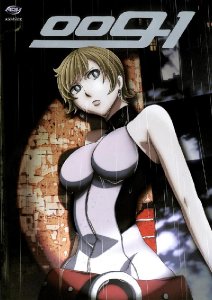 009-1. When mangaka Shotaro Ishinomori (creator of Cyborg 009) created 009-1, it was a piece of speculative fiction, a possible future. By the time this anime was produced, it took place in an alternate reality where history turned out differently. And today, we’re back to the original idea of a possible future. We’re talking about the Cold War between East and West of course, although the anime quite wisely ditches the names and places for something more generic and allegorical. The title is an indication of where the show is coming from, a tale of spies and espionage. The West is into cyborg enhancements, while the East focuses more on genetic manipulation, and the two sides’ spies are often pitted against each other. 009-1 is one of the 009 series of cyborgs, a skilled agent that does what it takes to complete her missions, but it turns out that her past is complex and she might not be trusted by her superiors.

Take the late sixties manga aesthetic when it comes to world and character design, and give it the early 2000s animation production values, and you get 009-1, a show that takes a rather adult approach to simplistic storytelling. It’s a sexy, stylish cyberpunk spy show that is light on tropes and clichés. It’s certainly worth seeking out. I got the ADV release from the US. They released it on three volumes, but it also got a limited collection with a 3-DVD case sized metal briefcase. Here’s my review of volume 1. After ADV went under, the show was picked up and re-released by Funimation. ADV did release it in the UK as well, but you’ll have to go on a mission to find any 009-1 anime second hand at this point.

All the Anime released the standard version of Konosuba Season 1 at the end of 2020. The Limited Edition is out of print at this point, and nigh on impossible to find.