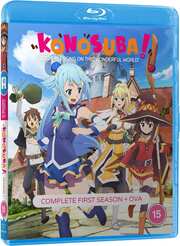 I never thought I’d get to this point, but I’m actually buying a lot less anime than I used to. That’s not all, I’m watching a lot less new anime as well. I still like anime, and have plenty of old content to re-watch, and will make time for some select, new titles. But in recent years, the medium has become saturated with one particular genre, much in the same way that the comic book movie has become the mainstay Hollywood blockbuster. I’m talking about isekai of course, the lost in an RPG world fantasy genre, which you cannot escape these days, not since Sword Art Online came and took over the world. There’s only so much isekai I can take, the market is so saturated now that even the exceptional shows are drowned out by the majority mediocrity. I miss the old days when such outings were just clichéd single episodes in long running series, where the protagonists fell asleep playing a videogame, and wound up having a shared dream. This all begs the question as to just why I paid money for Konosuba. 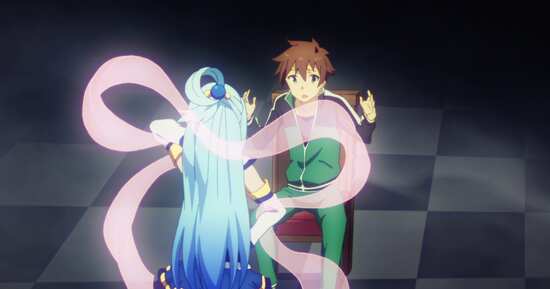 Konosuba – God’s Blessing on this Wonderful World is an isekai parody. It’s not a case of surrendering to the inevitable rather than it is a case of having seen so much isekai at this point, that the only entertainment I could get from those well worn and oft wheeled out clichés is to see them either subverted, or utterly ridiculed. Alas, no one has made the Evangelion or Madoka Magica isekai equivalent as yet, so I’ll settle for the isekai version of Airplane II the Sequel instead. 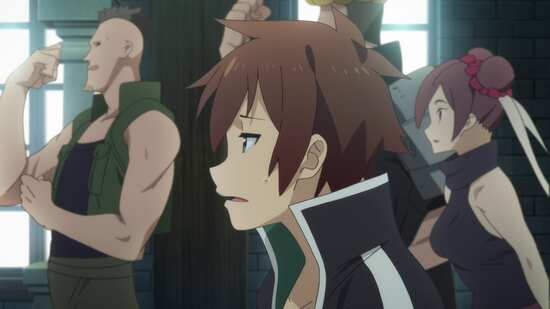 Kazuma Sato is a shut-in geek, who never ventures out of his house unless it’s absolutely necessary, like for an in-store exclusive promotion for his favourite game; which is when he dies in a traffic accident, trying to save a girl. He’s welcomed to the afterlife by the goddess Aqua, who takes time out to totally ridicule him for his manner of death, before offering him the option of reincarnation, or heaven. But this time there is a third choice, which allows him to keep his body and his memories; to wake up in an alternate, fantasy world. The deal gets better; he gets a power of his choosing. That would be a geek dream, but Kazuma is nothing if not a realist, and the powers on offer all seem to come with catches. So instead he makes another wish, that Aqua accompanies him in his new life. To the sarcastic goddess’ shock, the wish is granted. 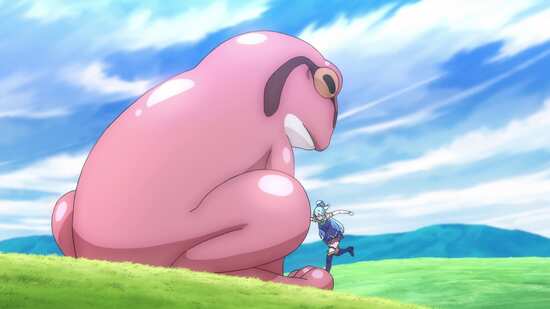 They arrive in a fantasy world, where just as Kazuma expects, the rules and people conform to the usual RPG tropes. It’s also made clear to Aqua that the only way to return to her life as a goddess is to defeat this world’s ultimate enemy, the Devil King. But it turns out that this isn’t going to be easy. For one thing, it usually takes a fair amount of grinding to get to a level where they can challenge an ultimate baddy, and Kazuma and Aqua are starting off at the bottom of the ladder. Also, quests that will help them power up aren’t all that common in the local guild. They’re going to have to get real jobs just to keep a roof over their heads. And finally, recruiting competent party members is nigh on impossible. They manage to get an archmage, Megumin, who has one spell in her arsenal that she’s totally obsessed with, and casting it just once drains her of power completely. Then there is Darkness, a crusader knight who also happens to be a total masochist. 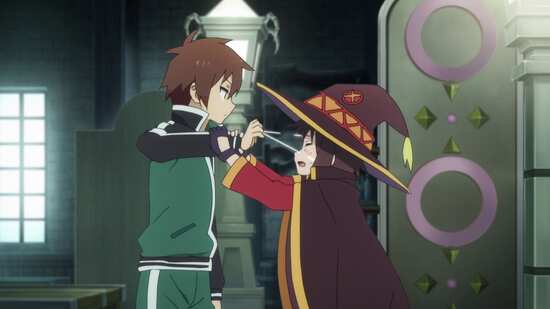 Ten episodes plus the OVA of Konosuba Season 1 are presented on 1 Blu-ray disc from All the Anime.

1. This Self-proclaimed Goddess and Reincarnation in Another World!
2. An Explosion For This Delusional Girl!
3. A Panty Treasure in This Right Hand!
4. Explosion Magic for This Formidable Enemy!
5. A Price for This Magic Sword!
6. A Conclusion to This Worthless Fight!
7. A Second Death in the Freezing Season!
8. A Loving Hand for Our Party When We Can’t Make It Through Winter!
9. God’s Blessing on This Wonderful Shop!
10. A Final Flame for this Over-The-Top Fortress!
11. (OVA) God’s Blessing On This Wonderful Choker! 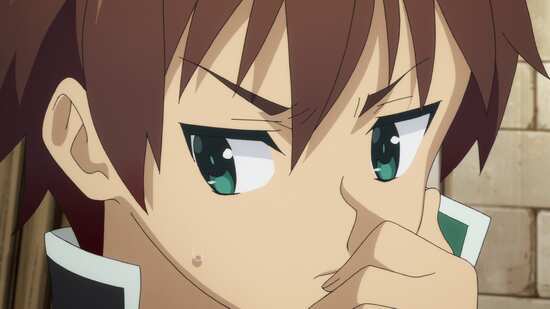 Konosuba gets a 1.78:1 widescreen 1080p transfer. This makes use of the Discotek release, authored by Justin Sevakis, so you’ll understand why I have no nits to pick with this release. The image is clear and sharp, colours are strong and consistent, and the animation is smooth and without any issue. No compression visible, no aliasing, and no digital banding mar this release. It’s a delightful comedy release with great character designs, and a fair bit of production value when it comes to action and effects in this parallel RPG world. 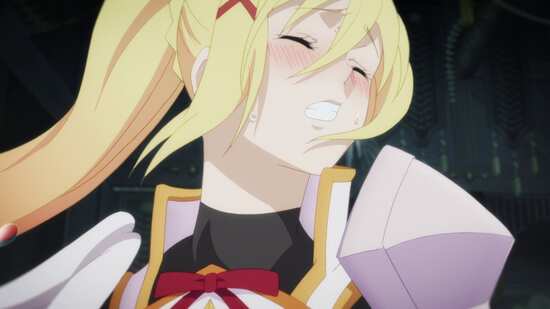 You have the choice between PCM 2.0 Stereo English and Japanese, with optional English subtitles and a signs only track. I went with the Japanese audio, and was happy enough with the experience. The actors are suited to their roles, the action comes across well, the music gets some serious theatrical orchestration, while the theme songs never tempt me to skip. The subtitles are accurately timed and are free of typos. 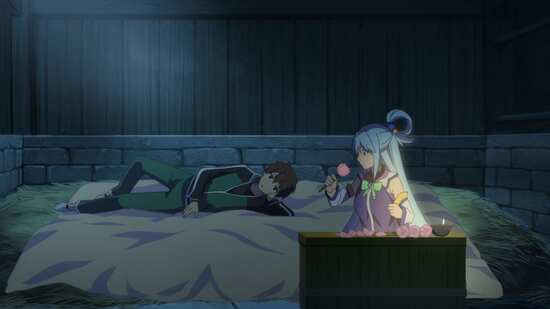 I bought the standard release of Konosuba which is what you’ll most likely find now. The Limited Collector’s Editions are out of print, and you’ll have missed out on artbooks. The standard offers one disc in a BD Amaray style case. The inner sleeve has some art on it, and the disc ends with a translated English credit scroll. The disc boots to a static menu. On the disc you’ll find the following extras. 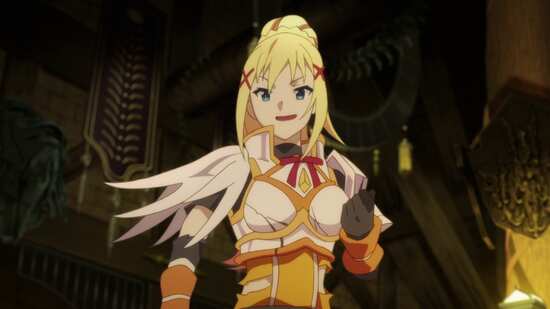 You get the textless credits.
The 7 Promotional Videos and Commercials run to 5:01.
Thanks for Watching looks forward to the second season and lasts 11 seconds. 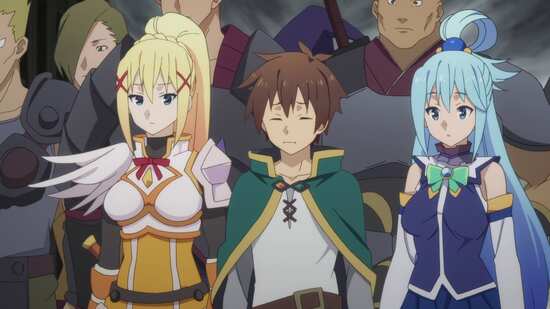 It may be isekai, but Konosuba is brilliant. It’s a delightful send up of that oversaturated genre which makes all those hundreds of hours of ‘lost in another world’ anime that I’ve watched almost worthwhile. I often find comedy anime humorous, I can smirk at it, chuckle even, appreciate its comedy on an intellectual level. It’s rare for me to laugh out loud at anime, to have my sides hurt at it, to have my face ache at it. Konosuba is one of these rare shows which is genuinely hilarious. 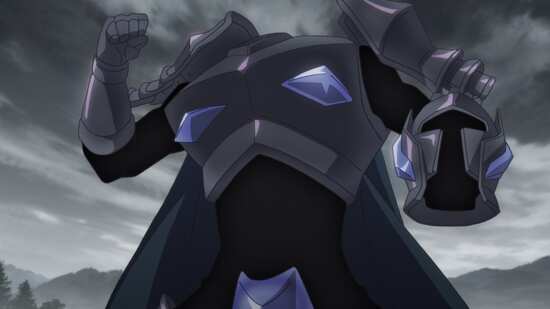 It seems at first just like your typical isekai, when a NEET dropout in this world gets the chance to prove his mettle in a fantasy world, following his accidental death, and given a chance at a new life. Naturally with all his game playing skills he masters the rules of such a world with ease. He sees through the ‘trap’ that the goddess in charge of his resurrection lays, granting him the choice of skills for his new life. He instead takes the obnoxious goddess with him, expecting the benefit of her powers in a world where he’s expected to succeed by defeating the Devil King. 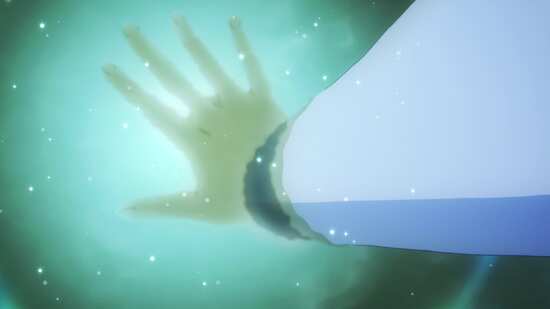 So far so average, but he winds up in a backwater of this world, where all the quests available to adventurers are of the lowest rank, and where he has to supplement his income as a hero by doing actual work around town. It’s as much as he can manage to find a stable to sleep in, no thanks to Aqua, who wants to maintain the lifestyle of a deity. Even when they manage to complete a quest, earn some significant reward, they also have to pay for the damage that they cause. The sole attribute that Kazuma has is good luck, and that helps him acquire some other, minor skills, so success comes from learning how to apply them tactically. 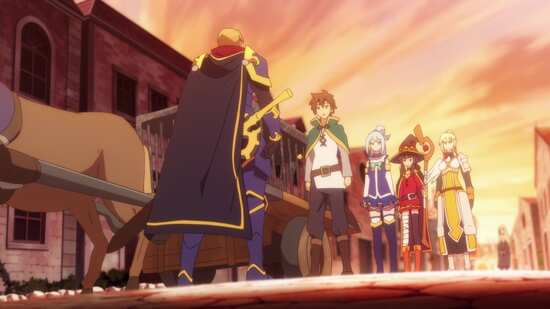 Aqua may be an archpriest (and goddess), but her luck and intelligence is low, so their first few quests don’t go too well. Naturally at a point like this in an RPG, it’s common sense to recruit other members to the party. Megumin is a powerful magic user, but she has just one spell that she’s obsessed with, and has no intention of learning any more. On top of that, the spell that she casts, Explosion, drains so much of her energy that she immediately collapses. The collateral damage that she causes and her vulnerability make her more a liability than an asset. That coupled with a chunibyo personality explains why no one else wants her in their party. Then there is Darkness, the crusader knight, another would-be powerful member. Only she’s a masochist, who gets turned on by the idea of being defeated and degraded by her opponents, and she quite likes the verbal abuse and sarcasm that Kazuma dishes out. And this is Kazuma’s party, in the hindquarters of the kingdom, far away from any action and hope of progressing and levelling up, where nothing of consequence ever happens. 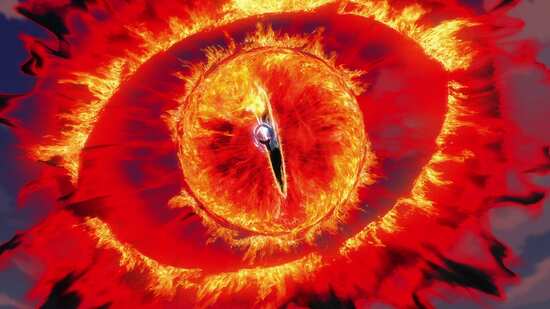 That leaves a lot of time to try and scrape by, and also gives the show plenty of time to rip into the copious isekai tropes and clichés. The relationship between Aqua and Kazuma is volatile and entertaining, with power and pride shifting between the two depending on who has the high ground. Aqua can be all “worship me” one minute, and then tugging on a proverbial forelock when she realises that the next meal is coming through Kazuma. The animators have also perfected a look of disenchantment for the characters when one of them does something stupid, or goes too far. 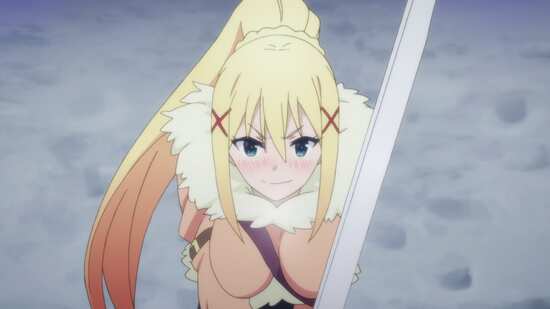 They do still manage to work their way up through the ranks, dealing with quests of increasing levels of difficulty, but always in the daftest, and most unexpected ways. Whether it’s an infestation of giant frogs, a headless horseman, haunted mansion, a rival adventurer (also resurrected from the real world by Aqua), or an abominable snow samurai, there are plenty of opportunities for hilarity in how the protagonists deal with them. And with every victory, there is an unexpected cost as well. 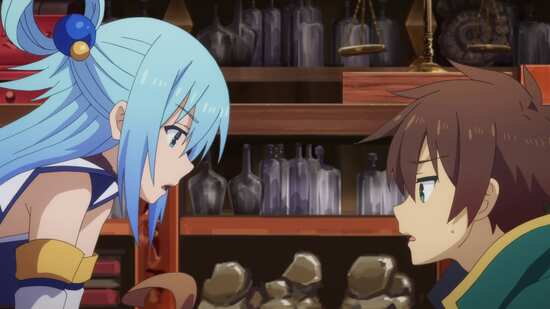 If there is an issue with Konosuba, it’s that it is an adaptation of another work, a light novel series, and there are often moments that you feel that something is missing. This is most apparent with the character of Wiz, the lich, magic shop owner, who suddenly appears in episode 8, with a back-story, and a shared past with the main characters that we just don’t get in the anime, other than through the briefest of flashbacks. Yet I didn’t find it as detrimental as I might have, the sense that I was missing out on a substantial chunk of the story, given just how funny the anime is. It’s hard to hold a grudge when you’re laughing. 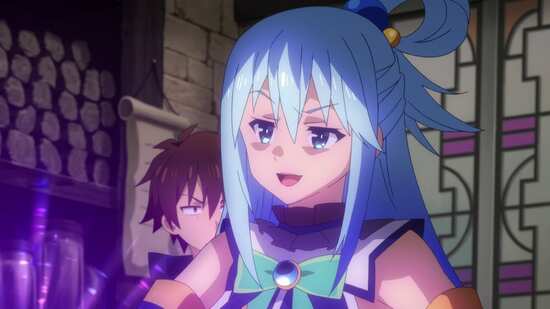 If you’re tired of the isekai genre, then you really need to watch Konosuba. It won’t make you like the genre any more, and it certainly won’t get you back into the RPG cliché fold, but it will make you grateful that you did watch all those other shows so that you can appreciate Konosuba ripping into them mercilessly, and to wonderfully comic effect.