DVD
One Foot In The Grave: The Complete Box Set (UK)

DVD
Have I Got News For You: Very Best Of (UK) 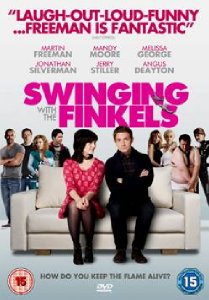 Swinging with the Finkels
COMING TO DVD 2 APRIL 2012

HOW DO YOU KEEP THE FLAME ALIVE?

SWINGING WITH THE FINKELS tells the story of Alvin and Ellie Finkel, played by British comedy favourite Martin Freeman (THE OFFICE, SHERLOCK, THE HOBBIT) and US film, music and TV star Mandy Moore (LICENSE TO WED, TANGLED); a London couple at breaking point in their marriage. Do they stay together and continue down an increasingly stale path, or should they attempt to relight the flame that they are both missing? Would sex toys be the answer? Will dressing up and role play help spice things up? Or should they indulge in the ultimate marriage scruple of wife swapping? Alvin and Ellie are about to discover whether swinging is the answer to their marital problems...

This hilarious film from the producer of BEND IT LIKE BECKHAM also stars Melissa George (30 DAYS OF NIGHT, TRIANGLE), US comedy legends Jonathan Silverman (WEEKEND AT BERNIE'S) and Jerry Stiller (ZOOLANDER) and British TV comedy stars Angus Deayton (HAVE I GOT NEWS FOR YOU), Daisy Beaumont (STAR STORIES) and Louis Spence - star of PINEAPPLE DANCE STUDIOS.

Swing into your nearest DVD store when SWINGING WITH THE FINKELS is released 2 April.