DVD
About A Boy (UK) 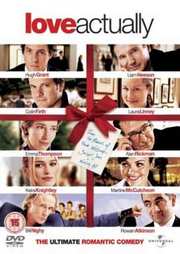 Synopsis:
Richard Curtis` Love Actually tells eight tales that explore the many aspects of love. The new Prime Minister (Hugh Grant) falls for a member of his Downing Street staff (Martine McCutcheon). A writer (Colin Firth) who has escaped to France discovers love again. A wife (Emma Thompson) suspects she may be losing her husband (Alan Rickman) to a younger woman. All these and more stories reach a climax one Christmas Eve in London.

Introduction
Love Actually - the DVD - well you know how it is with kids around, outings to the cinema are few and far between, so I tend to pick films that will be something special on the big screen.
You know, Matrix Revolutions, LotR etc.

I have much admired the work of Richard Curtis. I mean, it doesn`t get much better than the Blackadder Dynasty, and his films I`ve always enjoyed. Maybe his humour is in tune with my own, or he`s just a funny writer. Whatever.

I came to this hoping I`d like it, and based on past performance I thought I probably would. But at the back of your mind is the thought that everyone makes a bad film now and then.

I was quite amazed as the film opened up. Its a brave thing to do. There are about 10 sub-plots going on here, and no main plot. I`m amazed that the film got this far.
I thought most movie executives had in mind a cinema going audience has a general IQ of about 10. They can be relied to sit in there seat for a maximum or 2 hours (and then only if there is gratuitous sex and violence), and can only cope with around 2 main characters and 1 plot. Any divergence from that criteria leads to dramatic loss of income. The lowest common denominator is king.

I admit I found it confusing, you`re following one plot line, then switch into another.
Is he with Emma or ... and didn`t I see her with that Hugh Grant character? It takes a while to unravel the goings on, and you find that some of the plot streams are sometimes linked in sublte or unsubtle ways.

Anyway, you better file this film in the Rom-Com category. As there are so many plots going on, there is basically something for everyone. Some of them are poignant and touching, some are purely for laughs, some are a mixture. I think a better title would have been "Aspects of Love" but that appears to have been already taken!
Humour is never too far away though.

For me, Hugh is probably one of the lesser characters, although he is the prime minister.
Somehow the part isn`t quite right - it is for the love story, I just don`t think he plays prime minister material. He is more like his Notting Hill character.
Colin Firth is excellent and his story is perhaps the more classic love story.
Bill Nighy is hillarious as a rock star, as un-politically correct as it is possible to be! His meeting with Ant&Dec is marvellous.
Emma and Alan play husband and wife, and their plot perhaps more interesting than some.
The other plots intertwine nicely.

The Visuals/Audio
Nothing to complain about in either Visual or Audio department. Nice clear pictures, and the 5.1 mix is good - some atmospheric effects from the surround channels, but otherwise its all dialog.

The Extras
A nice set of extras for a single disk release.

Audio commentary. Now completed this, and its brilliant.
Richard Curtis, Hugh Grant, Billy Nighy and Thomas Sangster discussing things. Hugh is late, stuck in traffic so doesn`t get in until about 5 minutes. He then begins to pick apart Colins acting, in a tongue in cheek way. A little rivalry there apparently! He tries to get Tom to say which actor he`d prefer to be when he grows up too. They all have to keep telling Tom to close his eyes during some of the scenes.

Deleted scenes. Richard himself introduces each of these deleted scenes and tells why they were cut. Mostly for time reasons (the first cut was over 3 hours). The first deleted scene is actually 8 minutes long, which is fairly substantial scene in itself. Many of the other scenes are interesting too - making me wonder if we might not get a directors cut at some point with the material put back in. Some of it would be nice to have in the full film.

The Storytellers. Some insight into some of the sub-plots, and where the ideas came from (mostly Richards life).

Music video `Christmas Is All Around`. Nooooo! The song was a joke in the film from start to finish, one that nearly backfired on the British public when it nearly got into the christmas charts! Its better as a joke than a song! Its played really well here though, clearly again tongue in cheek.

Then there is a collection of some of the music tracks in film, each introduced by Richard explaining why he chose the songs, or how he tried to fit other tracks in there.

Summary
I liked the film, it IS complex to follow on a first viewing, with the plot and character mixtures.
I don`t think its going to be a classic or anything like that, it is very enjoyable though. Its warm and homely and is ideal for a quiet night in.
posted by Julian Onions on 2/4/2004 16:45