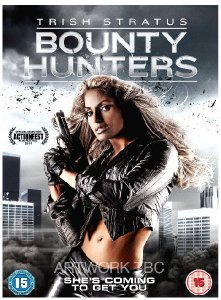 On DVD and download to own and rent 20th February 2012

Former 7 time WWE women's champion TRISH STRATUS makes her feature film debut in this no-holds-barred action-thriller. A team of bounty hunters become the prey, when they are targeted by a ruthless mafia boss in Bounty Hunters, coming to DVD and download to own and rent on 20th February, 2012.

SYNOPSIS:
A group of down-on-their-luck bounty hunters hit the jackpot one night when they pick up an informant with a hundred thousand dollar bounty on his head. But their world is turned upside down when a mob boss offers them one million dollars in exchange for the informant. When they refuse, the mafia unleashes a trio of assassins on them who use all of their power to bring the bounty hunters down, and to get their man - dead or alive.