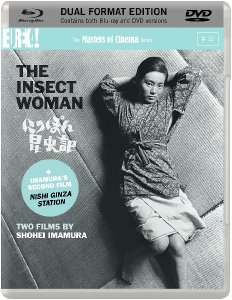 THE INSECT WOMAN
Masters of Cinema

"My heroines are true to life - just look around you at Japanese women. They are strong, and they outlive men," director Shôhei Imamura once observed. And so an audacious, anthropological approach to filmmaking came into full maturity with the director's vast 1963 chronicle of pre- and post-war Japan, The Insect Woman [i]Nippon-konchûki, or An Account of Japanese Insects].

Comparing his heroine, Tome Matsuki (played by Sachiko Hidari, who won the "Best Actress" award at the 1964 Berlin Film Festival for the role) to the restlessness and survival instincts of worker insects, the film is an unsparing study of working-class female life. Beginning with Tome's birth in 1918, it follows her through five decades of social change, several improvised careers, and male-inflicted cruelty.

Elliptically plotted, brimming over with black humour and taboo material, and immaculately staged in crystalline NikkatsuScope, The Insect Woman is arguably Imamura's most radical and emphatic testament to female resilience.

Widely recognised as one of the most important films of the Japanese New Wave of the 1960s, the Masters of Cinema Series is proud to present The Insect Woman alongside Imamura's rarely seen 1958 feature Nishi-Ginza Station in a special Dual Format edition, released in the UK on 20 February 2012.