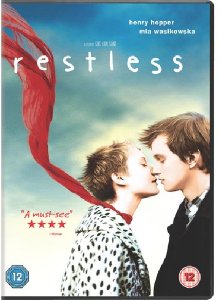 Mia Wasikowska (Jane Eyre, Alice in Wonderland) and newcomer Henry Hopper shine in this humorous and touching tale of romance between a young man (Hopper) who has given up on life and a young girl (Wasikowska) on the verge of losing hers. Produced by the Oscar®-winning team of Brian Grazer and Ron Howard (Best Picture for A Beautiful Mind, 2009), actress Bryce Dallas Howard (50/50, The Help) and director Van Sant, and co-starring Jane Adams (TV's "Hung") and Ryo Kase (Letters From Iwo Jima), RESTLESS has charmed and moved audiences since its debut at the 2011 Cannes Film Festival. Now, film lovers can discover this "uncommonly touching romance" (Roger Ebert, Chicago Sun Times) on DVD featuring unique and provocative special features, including Gus Van Sant's Silent Film version of the movie.

Additional special features include deleted scenes, plus the behind-the-scenes featurettes "Being Restless," "Coming to Life: This is Restless," "Enoch & Annabel: One Love," "Enoch & Hiroshi: The Best of Friends," and "Gus Van Sant: Independent Voice."

Fans of romantic dramas like An Education and Dear John won't want to miss RESTLESS when it becomes available to own on DVDfor RRP £12.99.

Synopsis
Annabel Cotton (Wasikowska) is a beautiful and charming terminal cancer patient with a deep felt love of life and the natural world. Enoch Brae (Hopper) is a young man who has dropped out of the business of living, after an accident claimed the life of his parents. When these two outsiders chance to meet at a funeral, they find an unexpected common ground in their unique experiences of the world. For Enoch, it includes his best friend Hiroshi (Kase) who happens to be the ghost of a Kamikaze fighter pilot. For Annabel, it involves an admiration of Charles Darwin and an interest in how other creatures live. Upon learning of Annabel's imminent early passing, Enoch offers to help her face her last days with an irreverent abandon, tempting fate, tradition and even death itself.

As their unique love for each other grows, so do the realities of the world that they have felt closing in on them. Daring, childlike, and distinctly rare - these two bravely face what life has in store for them. Fighting pain, anger and loss with youth, playfulness and originality, these two misfits turn the tables on life and play by their own rules. Their journey begins to collide with the unstoppable march of time, as the natural cycle of life comes to claim Annabel.

RESTLESS has a run time of approximately 87 minutes and has been rated 12.

Pricing and bonus features on Digital editions of RESTLESS may vary by service provider.

"Academy Award" and "Oscar" are registered trademarks of the Academy of Motion Pictures Arts and Sciences.