Blu-ray
The Man With the Golden Gun
Related Articles 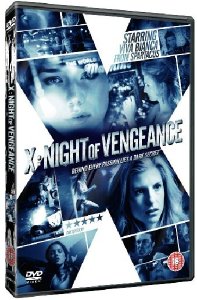 Behind every passion lies a dark secret…

VIVA BIANCA (Spartacus: Blood & Sand) and HANNA MANGAN-LAWRENCE (Acolytes) star as a jaded call-girl and a fledging hooker caught up in a night from hell in the action-packed, sizzling X: NIGHT OF VENGEANCE, coming to DVD on 20th February 2012 (RRP £15.99)

When a twist of fate throws the two women together on a job that goes horribly wrong, they suddenly find themselves racing through Sydney's criminal underworld in a desperate attempt to stay alive.

From the director of award winning smash hit horror 'Acolytes', X: NIGHT OF VENGEANCE is a steamy thriller following two beautiful women on one ugly night that will change their lives forever.