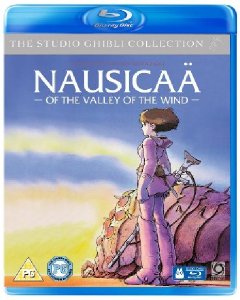 From Academy Award- Winning Director Hayao Miyazaki and Studio Ghibli comes the marvellous manga masterpiece Nausicaä of the Valley of the Wind available on Blu-ray Disc for the very first time from 18 October courtesy of Optimum Home Entertainment.

Nausicaä, first released in 1984, is set in the post-apocalyptic future where the human's live next to a Toxic Jungle of crystalline trees and giant fungi whose airborne spores can kill people in minutes - that is if the giant insects don't get them first. One of the human kingdoms that remains idyllic, the peaceful Valley of the Wind, harbours a gentle Princess named Nausicaä who lives with her father the king, but their peace is about to be shattered as they are swallowed up in the machinations of their war-waging neighbours.

Nausicaä is a fine example of everything that has made Studio Ghibli world-renowned and this brand new high definition release is just the edition fans have been waiting for. With Miyazaki's trademark fluid animation looking better than ever on Blu-ray, and with the release also coming packed with crucial extra features, this really is both the version fans have been waiting for and the perfect introduction for Ghibli converts everywhere.