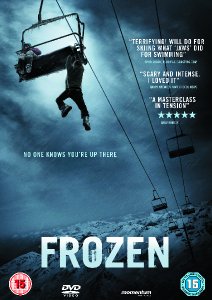 Frozen
On DVD and Blu-ray

"THE SCARIEST PIECE OF SURVIVAL HORROR SINCE 'JAWS' ATTACKED OUR SCREENS." - BIZARRE.

The latest shocker from writer-director Adam Green (Hatchet; Spiral) and producer Peter Block (the Saw movies; Daybreakers; Crank; Rambo), the film has been hailed as "a real chiller" (Daily Star), "a tour de force of suspense and horror" (Financial Times), "terrifying enough to make even the most enthusiastic skier think twice about getting on a chairlift again" (Daily Star Sunday) and "one of the most intense shockers of recent years" (Dazed & Confused).

Frozen stars Shawn Ashmore (the X-Men trilogy), Kevin Zegers (Dawn Of The Dead) and Emma Bell (Death In Love; New York City Serenade) as a trio of twenty-somethings - best friends Joe Lynch (Ashmore) and Dan Walker (Zegers), plus Dan's girlfriend Parker O'Neil (Bell) - hoping to spend some quality time skiing and snowboarding in the picturesque resort of Mount Holliston. But a typical day on the slopes turns into a chilling nightmare when they find themselves unexpectedly stranded on a chairlift shortly after the ski resort closes for the week. Unknowingly left dangling high above the ground and with no apparent safe way down as night begins to set in, with increasing panic they soon realize that the threats of frostbite and hypothermia are the least of their worries.

Forced to take extremely desperate measures in order to survive the bitter cold, overcome unexpected obstacles and attempt to reach safety, the three friends are driven to ask not only if they have the will to survive but also to consider what are the worst ways to die.

Co-starring Rileah Vanderbilt (Hatchet; Spiral) and horror-genre fan favourite Kane Hodder (Jason from the 'Friday the 13th' movies), Frozen is an effective, nail-biting experience that will keep viewers on the edges of their seats until its final frame.

Additional extras exclusive to the Blu-ray include: audio commentary by cinematographer Will Barratt and editor Ed Marx; Deleted Scenes with audio commentary; 'Chair 92'.