Both of today's news items come from Anime UK News, and the first isn't the Flintstones revival if that's what you were thinking. BAM stands for Bexley Anime and Manga, and if you are in the vicinity of South East London come February 2010, you'll be able to partake of a whole month of fun, with cinema screenings, seminars, workshops, cosplay and loads more besides. It's early days as yet, but keep an eye on their Facebook page to see what other exciting events will be announced.

Long ago, when there were two dollars to the pound, I went on an import spree, stocking up on Region 1 anime at bargain basement prices. The most bargain basement-est of them all were the Bandai Anime Legends line, whole series in m-lock cases, and I had the likes of Planetes, Cowboy Bebop, Wolf's Rain, and Witch Hunter Robin, for around £15 each. Bandai's European arm, Beez has been notoriously slow to discount, but one eagle-eyed anime prospector on the Anime UK News forums has spotted these two titles at Play, Wolf's Rain and Gundam Seed Part 1 pre-trailing for £16.99, under the Beez Anime Legends label. That's around 10 hours of anime for a price actually cheaper than what it would cost to import now. All I can say is that it's about time. And anyone who says that anime in the UK is too expensive needs their head examined. 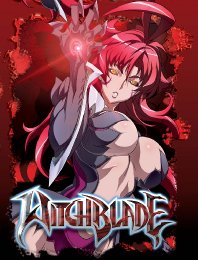 I can't believe that I forgot to mention this. MyReviewer is currently running a competition for two lucky entrants to get their hands on a Witchblade boxset, courtesy of MVM. It's the futuristic dark conspiracy sci-fi from Gonzo, set in a world where... It's the one with the boobies. Click here to enter. 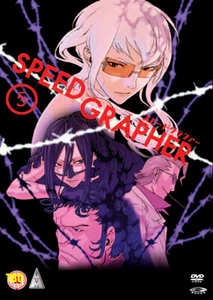 Last week I was mugged by Santa Claus, and forced at reindeer point to review a slew of comedy DVDs. Every year it's the same thing. But, I did manage to sneak a couple of sly anime reviews out while no one was looking. First up was my regular trip to the world of Speed Grapher. Things are getting all penultimatey, with raised stakes, peril and excitement, and more twists and turns than a boa constrictor in paroxysm. Find out what I thought of Speed Grapher: Volume 5, and what paroxysm means by clicking on my review. Note: I lied about finding out the definition of paroxysm. 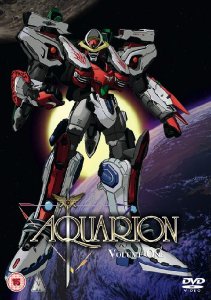 I also found the time, somehow, to take a look at Aquarion: Volume 1. I am finally reviewing a generic mecha anime show, the sort of show that I usually cross the road, get on a bus, go to the airport, and leave the country to avoid. But Aquarion has a soundtrack by Yoko Kanno, which usually flicks my 'Oh, go on then' switch, and it has pretty stunning animation from Satelight. This may actually be the show that convinces me that there is a point to teenagers getting into giant robots to fight off alien menaces. See how many clichés I had to duck and avoid by clicking on my review.