The Shield: Season 7 out in June 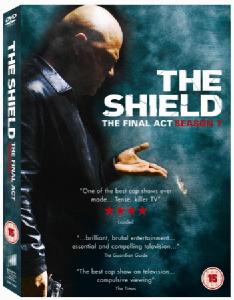 Plus 51 Deleted Scenes with Commentary by Creator Shawn Ryan

Los Angeles' most controversial and corrupt cops are back one last time on 8 June 2009 when Sony Pictures Home Entertainment debuts The Shield Season Seven: The Final Act on DVD. The final season of this gritty, hard-hitting police drama is loaded with exclusive bonus features, including commentary on every episode, plus 51 deleted scenes with optional commentary by creator Shawn Ryan and two all-new featurettes looking at shooting the final season and on being on set for the last episode. The Shield Season Seven: The Final Act will be released as a four-disc collection containing all 13 episodes.

The Shield follows a tough crime-infested L.A. police precinct and its elite team of cops who are undeniably effective when it comes to cracking tough cases, whilst being equally as 'dirty' to get results. The show was created and written by Shawn Ryan (TV's "The Unit") and executive produced by Ryan, Kurt Sutter, Charles Eglee, Adam Fierro and Kevin Cremin. Emmy® and Golden Globe® winner Michael Chiklis (Fantastic Four) stars as rogue Detective Vic Mackey, who administers his own brand of justice as he tries to keep balance of power in the criminal hierarchy of L.A.'s seedy Farmington Division. Mackey and his team - which includes Emmy® nominee CCH Pounder (TV's "ER"), David Marciano (Lethal Weapon 2), Benito Martinez (Million Dollar Baby), Walton Goggins (The Bourne Identity), Jay Karnes (The Next Best Thing), Catherine Dent (Someone Like You) and Michael Jace (Forrest Gump) - write the rules as they go along.

Vic faces threats from all directions in this hard-hitting final season: the damaged protégé Detective Shane Vendrell, the honourable Captain Claudette Wyms intent on cleaning up the force and the Mob who have 'greenlit' (marked for death) him and his family. Can Vic survive? All will be revealed!

For the first time, every episode of this multi-award-winning series will also be available to buy in one deluxe DVD collection when The Shield: Complete Seasons 1-7 Box Set is released on 8 June, 2009. This essential collector's item boasts a wealth of exclusive and unmissable extras, including a never-before-seen disc containing two featurettes: "Rampart," a documentary on the police scandal that inspired the series, and "The Barn," a final set tour.

The Shield Season Seven: The Final Act episodes include: