Your Reviewer
Forum List
Latest Forum Posts
What are you listening to now??? (Music recomendations)

Still looking at options. I'm sure the data's still there (Only really need a couple of folders of private stuff) but it's getting to it. The W7 dvd only had a single installation license, so I'm not sure if I could use that again. But if I wanted to install W10 on a new HDD (Or SSD) that would be a new install rather than an upgrade, so I might have to pay full whack.

I could probably google all this, but all this BSOD crap has really ruined my weekend and my head isn't into it right now. It's that GTA re-install I'm really not looking forward to

Day one of recovering my stuff went unexpectedly well. While I'm not a hoarder, when it comes to PC components I'm a bugger for not throwing them out when I stop using them. Thanks to this mindset, I've had an old tower in storage under my bed for at least 8 years. I had intended to re-purpose the case for the new build I was putting together at the time, but as I'd moved the bottom shelf up, the old case wouldn't fit. So I just removed the HDD and put everything else away as was. The HDD I attached to my new build so I could transer wanted files & programs across, then wife. Luckily, I must have deciced against a complete wipe as when i put it all back together again it fired up first time. Hello glorious XP!

Biggest shock was that while the non-moduar PSU that came with the tower is probably 10-15 years old, it had the correct connections for the non-operational HDD so it slotted straight in... 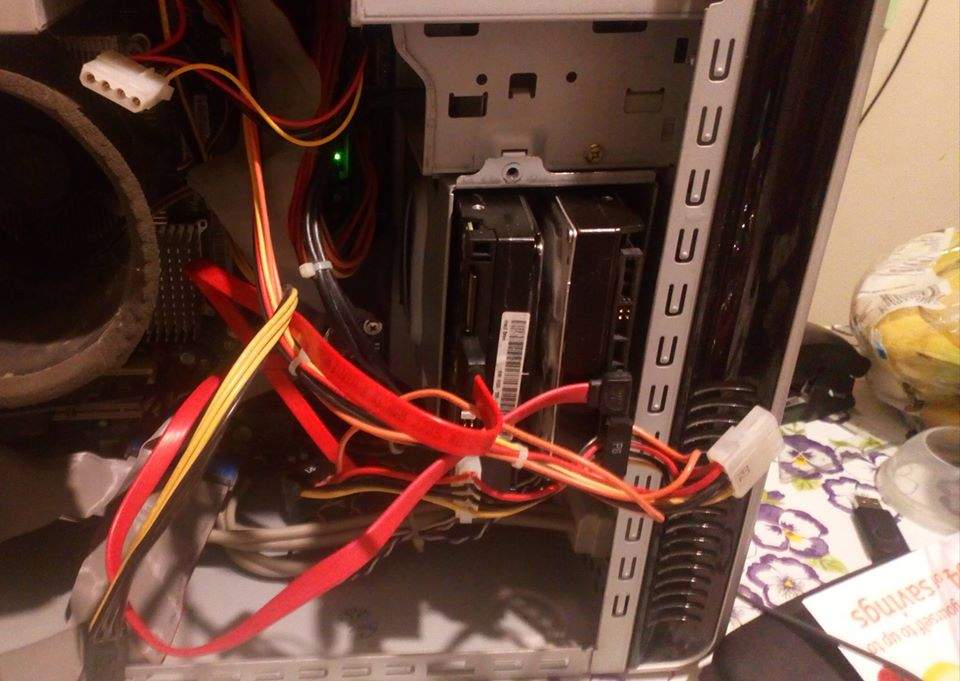 After a moments panic when the BIOS wanted a password i hadn't used in a decade, the poorly HDD showed up as G: with all relevant files intact (We've got a tribunal 'thing' coming up in a couple of months and all our relevant docs were on that thing). The Older HDD is only 250gb, so a quarter of the room of my current one, so picking & choosing what to save was a tricky one. Family photos & videos, save files, movies all across to the older drive, with some transferred to this laptop just in case.

Tomorrow, both HDDs get moved into the other case. Boot sequences switched and OS re-installed. The important files we've recovered and Annie's happy. Feeling much more hopeful about it now. Let's just hope the OS takes (I'll be using a wired network connection this time. Wireless can wait.)

Well, all files transferred and the clean install of W7 seems to have worked. Just one snag - the product key I have for W7 was a single-license, and although the setup I'm using hasn't changed one iota, it's not accepting the key, which is a bugger. I tried starting the update to W10 but that also requires an activated copy of Windows.

You could join the insider program and download it? to leave the program you have to have a license, I don't know if your 7 key will work. I've got inside version running on a couple of machines, had no issues for ages, but they're not used for games

I'm sure I use mine for gaming over anything else, so that's probably not for me, but thanks for the suggestion. Might come in handy on other machines.

Spoke with MS support, and essentially hit another wall. Mind you, 'Julia' did suggest that using another motherboard may be a way around it. I have been debating an upgrade but I'd want to be sure it would work before I spend that much.

Here's a secret Julia doesn't want you to know. You don't need to worry about product keys. Just install Windows 10 from scratch (clean install) and then use... let's say "alternative methods" to activate.

I can PM you the details if you want.

I'm always concerned that it'll get picked up and my pc will get remotely borked. If it comes to it I'll take you up on the offer. As i've got access to all the original files it's a little less urgent now.

You seriously did that upgrade with important, non-backed up files?

Why aren't they backed up anyway, never mind the upgrade?  Any idea why your upgrade didn't work?
If all the files were there it sounds as though it should have been recoverable - but it seems you're back now.  Pretty much all PSU's will have the connections you need - or an adaptor would do the job.  Or a caddy.
You should just be able to speak to M$ to get it activated if it's all legit and the same PC - don't know why they weren't able to do it for you.
You need to get yourself a 1TB portable hard disk (only about £40) and start backing things up - sounds as if you've been rather lucky up to now.

Quote:
sj says...
"Any idea why your upgrade didn't work?"
The error message I managed to retrieve indicated it was linked to the drivers for a TP-Link USB wireless dongle. I removed the USB and deleted the driver. As soon as I resetted the PC it was BSODs all the way down. Everything I'd looked as was that the process would be simple and only take a few hours. Oh, how naive was i?

Quote:
sj says...
"You should just be able to speak to M$ to get it activated if it's all legit and the same PC"
I did, I pretty much said exactly what you have, and was met with 'we no longer offer support for Windows 7'. As I only had a single license copy of W7, linked to my current HDD/MB bios setup, it wouldn't let me activate the OS because it knows I've used that product key before - and the only way it knows that is because I'm trying to use it on the same system that's previously been activated.

It doesn't makes sense, and Julia agreed. Mind you, apart from throwing me a bone about a new MB being a way of getting around the problem, 'Julia' (who had an amazingly strong Indian accent) was probably reading from a flowchart, and i could actually hear her shrugging.

Quote:
sj says...
" sounds as if you've been rather lucky up to now. "
You have no idea. I knew the files were there, and knew how to get to them. Annie's positively spitting chips that my 'not throwing PC crap away' policy has been completely vindicated!

don't worry, it's still getting updates for the "important" things?