last post by mbilko
The Secret Genius of Modern Life

last post by admars
Ticket booking fees declared too expensive by Which?

last post by badboybez
Top Gear really is back!

Review
Review for Is It Wrong To Try To Pick Up Girls In A Dungeon?! - Season 3 Collector's Edition

Review
Review for The Dead and the Deadly

Review
Review for Son of the White Mare [Fehérlófia]

Review
Review for The One

Page 1 of Actually, I'm something of a Youtuber myself

Actually, I'm something of a Youtuber myself

So I have a Youtube channel. Have had for several years, but I haven't really done anything with it. I had a few little family moments on there, and for some reason one of me making fudge from about 14 years ago that has amassed just over 60k view in that time (about 10 views a day, so nothing groundbreaking).

I got a little more traction when I put together a couple of GTAV videos about how to steal a jet from the military base. I actually re-made that one about a year later with a more up-to-date method, and for some reason, although the more recent version has more views overall, the older one is currently getting more daily views, weird.

Since then I've just done little uploads about whatever took my fancy at the time. there's a about 12 videos in a row about the Cayo Perico heist, but repeating yourself over and over starts to get tedious after a while.

Then I posted this one:

And it got a little more noticed. Again not groundbreaking, but certainly above average. I was getting used to Wondershare Filmora for editing, so decided to spend proper time writing,  voiceover-recording, editing & producing an actual video about something that interested me, and might be of interest to others. You've probably seen it over on the Ghostbusters Afterlife thread;

In all honesty, i thought I'd just post the video and see what happens. Certainly wasn't expecting anything too earth-shattering. Then about 3 weeks ago I noticed a little spike in the numbers one Saturday. Then another the following weekend. But the weekend after that the spike didn't stop... 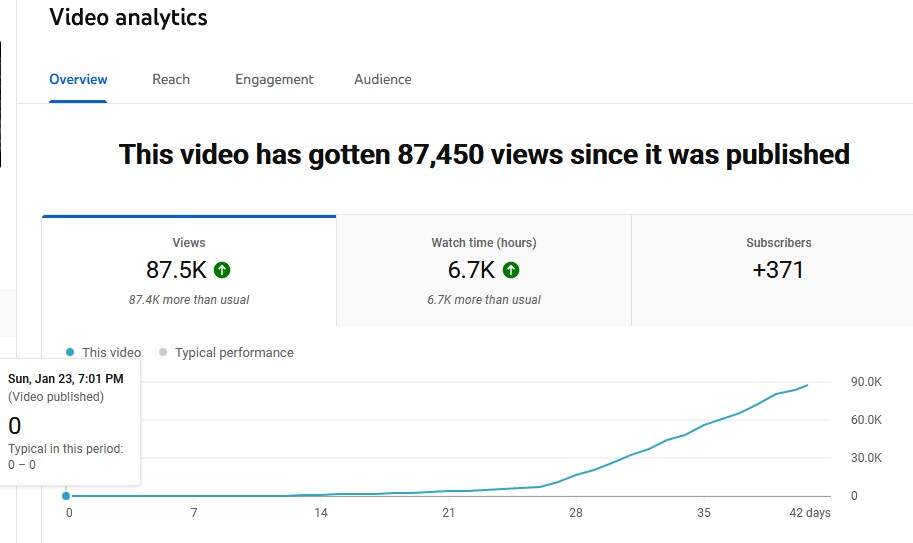 Thanks to this one video my subscriber count has tripled and I'm currently only one set of critera away from being able to monetise the channel. I have more ideas for content (I have a Back to the Future video I just uploaded that, while not blowing my socks off, is doing better than the Ghostbusters one did to begin with) but again, it's what takes my fancy at the time.

I'm not bragging, but just thought I'd share something that is helping me get through the nightmare that is the current state of the planet right now. It's pretty exciting, and I'm learning more about editing every time. Who knows if this will lead anywhere at all, but I'm excited to find out.

Thanks for coming to my TED talk.

I think one of your strengths like James Hoffmann who talks about coffee and related products, is that you talk like a normal person :)

there's one guy the missus watches with the kids, where I have to leave the room, as he's just far too over the top excitable.

I follow https://www.youtube.com/c/AhnaldT101 who talks about swgoh, he's quite animated,  enthusiastic, and funny at times, and likes a good rant, but you know, sometimes, you just want to watch a video which is like a mate telling you something, which is what I think you achieve :)

keep up the good work, and good luck

I've lost count of the amount of times I've started a clip and hit stop within five seconds, on all manner of subjects, due to the voice or attitude.

Funnily enough YouTube put your Columbia faces on my opening page a little while ago.

My pet hate.
There should be a special section of hell for anyone that puts up content which is them just pointing their phone or camera at a TV screen.

Good luck with it.

I am not young enough to know everything.
Liked by: admars Pete-MK

Quote:
Snaps says...
"There should be a special section of hell for anyone that puts up content which is them just pointing their phone or camera at a TV screen."
Unfortunately, that's the only way my son can record gaming video for his own channel, as we're several pay brackets away from being able to afford a proper streaming setup. It keeps him happy.

I should have been more specific.

I keep happening across movie clips people have posted up 'Best ever' 'You have to see' etc which are the YouTube equivalent of drunkenly whacking your mate on the shoulder with 'Here watch this bit' while he snores and dribbles on the other end of the sofa.
I chuffing hate it.

Oh yeah, there's absolute dross out there in spades, and my youngest generally watches them on his tablet at high volume. Luckily, YT clamped down on that crap years ago with their tightening of the monetisation rules, but the videos are still on the platform.

Users were uploading 11-minute videos stuffed with the most banal crap under spurious headings and getting paid for it, so they introduced rules about originality and different content from video to video, which also meant actually employing people instead of relying on unreliable algorithms (ask me about that one later) to actually watch the videos to check them for content.

I've actually had about £36 sitting in an AdSense account for the best part of a decade thanks to the fudge video, bit since the critera got stricter, I haven't been able to touch it. Maybe next month.

Just a little update on that Ghostbusters video...

Remember us when you are big channel and making much money!

Just kidding. I have yet to figure out anything about the financial side of getting monetized, but I'm assured there's a support team for that. All I know is that if you get over a certain amount a month you have to declare it as income so it's taxed, and if it's regularly over that certain amount there also the realms of registering as self-employed, even though I have a full-time regular job. 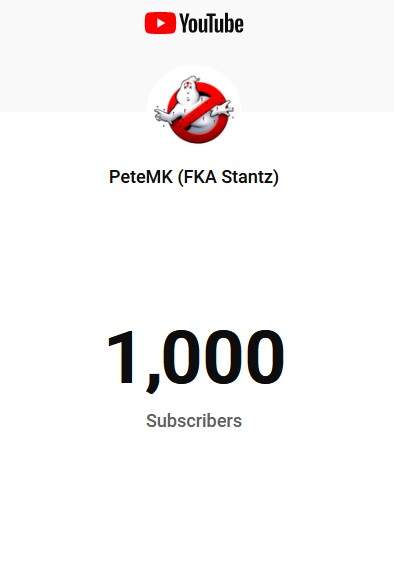