Review
Review for One Cut of the Dead - Hollywood Edition

Watched this today... Blew me away!

Carving out a niche with a pneumatic drill at Anime @ MyReviewer.com
Liked by: Robee J Shepherd pat-w mbilko

Quote:
Jitendar Canth says...
"Watched this today... Blew me away!"
"Rumor has it that Prince played such an insanely great solo in response to the snub he felt after being left off of Rolling Stone Magazine’s top 100 guitar players ever list. Prince proves that he belongs somewhere on that list, perhaps in the top ten, so watch this clip if you’ve never seen it, and take in the “purple’s one’s” majesty of rock. Oh, and lastly, at the end of the song, Prince hurls his guitar into the sky towards the audience, and it never lands…a new mystery for our time."

Quote:
Si Wooldridge says...
"Prince proves that he belongs somewhere on that list, perhaps in the top ten"
I think it's difficult to say who is the best guitarist of all time, everyone is going to pick someone different. But he is up there with the greats, top five at least (and top for me).

I got into Prince in my late teens, just too late to experience the Lovesexy tour, but I saw every one after that (some of them a few times). Before that I always liked music, but his was like my true musical education. His was the first music I lost myself in, and the only artist I ever got his new album the day it came out and played it to death.

Oh and yeah, two Prince albums I didn't own physical copies of, yesterday when rumours of his death were just rumours, £6.99 on Amazon.
Today...? £8.99 on Amazon. Good old profiteering!

Quote:
Rob Shepherd says...
"When Kevin Smith met Prince..."
Watched that the night he died, was very funny (so long as you have half an hour to spare)... 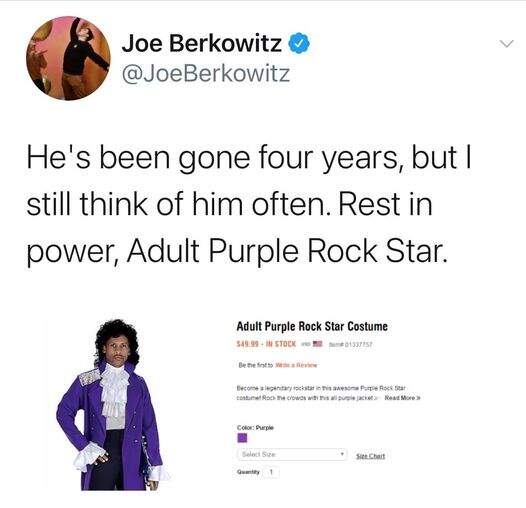 Oh my gosh 😂 This reminds me of that scene in Borat 2.