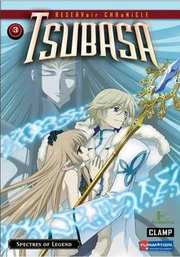 Synopsis:
In the midst of a quest that may well be endless, Syaoran and his companions seek to help those they encounter along the way. After planting the seed of revolution among an oppressed populace, the heroes travel to a new world - a snow-covered realm, at once both haunting and haunted. A crumbling castle lurks on the village edge, from which the townsfolk suspect a royal spectre emerges to roam the streets at night, stealing children. When Sakura disappears into nocturnal silence, the truth proves even more chilling than the legend...Nothing is as it seems as a tale that has spanned the centuries seeks its end.