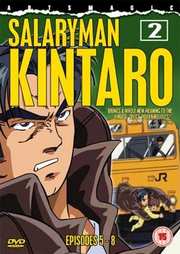 Salaryman Kintaro is the reaction to this culture of overwork, first explored in the manga by Hiroshi Motomiya. This anime adaptation follows the career of Yajima Kintaro, who once led a bike gang of 10000 members and had built a reputation as a tough guy. Becoming a father changed all that, and now raising his son alone after the mother died in childbirth, he`s vowed to become respectable. He`s got a job at Yamato Construction, where his straightforward attitude, and tendency to speak with his fists has made him stand out where quiet mundanity is the required attitude. His presence is the catalyst for a power struggle in the company`s higher echelons. On one side there is company president Ohshima and his clique of former government bureaucrats, who are mercenary and corrupt. On the other side is the company founder Chairman Yamato, and some loyal salarymen, who wish to take back control of the company, and restore it to a more honourable path. This disc from Artsmagic contains 4 episodes.

5. Kintaro Becomes Very Popular
He may be just sharpening pencils, but Kintaro is learning more and more about the company. Meanwhile, salarymen loyal to the Chairman are plotting against President Ohshima. Maeda and Tanaka have a theory about how Ohshima engineered the takeover of Yamato Construction, but they need proof and they are about to fall at the first hurdle. Meanwhile Kintaro is busy fending off female attention.

6. The Crucial Moment For Men
Kintaro convinces fellow salaryman Ishikawa to do the right thing, and he quickly adds his talents to Maeda and Tanaka. But time has run out, as Ohshima has returned and called a board meeting to finally oust Yamato and his supporters. Kintaro`s personal life just gets more complicated, as Yamato`s granddaughter develops a dangerous crush on him, then two yakuza pay him a visit at work.

7. Kintaro Snaps
There`s confrontation at the top and bottom of the company, as the Chairman faces off against the President, while Kintaro has to stand up to two unwelcome visitors.

8. Kintaro Doesn`t Impress Me
It`s all change at Yamato Construction, with the regime of President Ohshima at an end. But Kintaro has made a powerful enemy that could cause trouble for the company. Meanwhile, the repercussions of Ohshima`s dismissal begin to bite. 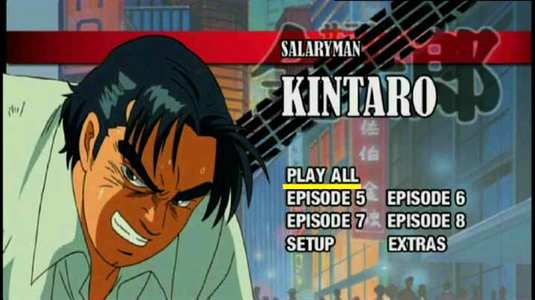 Artsmagic present Salaryman Kintaro on a two-layer PAL disc. The picture is a 1.78:1 anamorphic transfer, which is a fairly problem free standards conversion from NTSC to PAL. There are no significant artefacts, and the only legacy of the conversion is a slight added softness to the image. There`s also no ghosting or jerky pans, and only an occasional hint of aliasing. The animation itself isn`t up to the standard of most modern anime, and indeed were it not for the anamorphic format, I`d take it for a much older programme. The main character designs are distinctive, but some of the supporting characters seem a little generic. The animation is simple and lacks dynamism. It`s reminiscent of older shows where time would be spent on animation only when the story demands it. 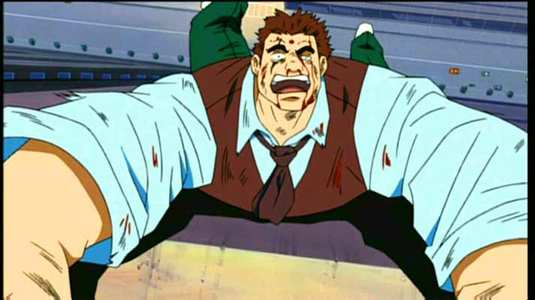 You get a choice of a DD 5.1 or DD 2.0 Japanese soundtracks, no English dub here I`m afraid. There is the odd moment where dialogue on the surround track is subdued by effects or music, but by and large the track does the show justice, without exhibiting significant flair. Salaryman Kintaro is another anime that has a toe tapping theme tune, although the end theme is a little too Chris De Burgh for my liking. As with all the Artsmagic DVDs that I have encountered, there are two subtitle tracks with the programme, differing only in the size of font. It`s a useful addition that takes into account difficulties of vision and differing screen sizes. The subtitles were legible throughout, although there was one line missing in the first episode. 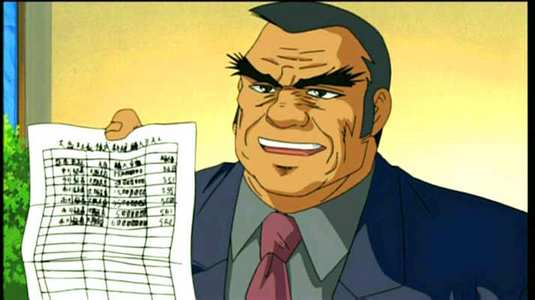 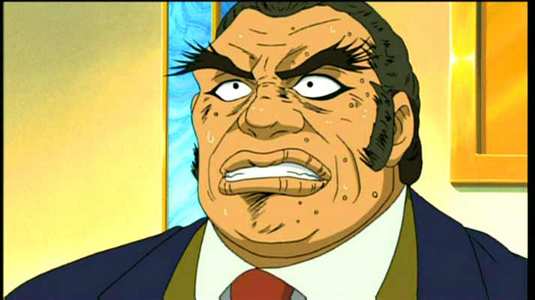 If you`ve seen the first volume of Salaryman Kintaro, then you will know what to expect from this disc. It`s more of the same really, with everyman Kintaro doing at work what none of us have the guts to. If you ever wanted to tell your supervisor where he could stick his team building exercise, wanted to punch someone when your pension fund evaporates, burst into tears of gratitude when your boss recognises your years of hard service, then this series is for you.

While this series is named after Kintaro, he isn`t necessarily the prime mover of events as we learn in these four episodes. Rather his presence and forthright nature is enough to inspire his co-workers and superiors to stand up for themselves and act. As his fellow salarymen work to uncover the evidence against Ohshima, as Yamato finally decides to take back control of his company, Kintaro is dealing with far more mundane matters, oblivious to the high level machinations. He has to worry about excessive and unwanted female attention, and getting on the wrong side of the underworld. He`s practically unaware that the example he sets is enough to improve matters at Yamato Construction.

Unlike most other 20-minute anime, Salaryman Kintaro usually has more than one storyline in play, cutting between them. With its wealth of characters it`s very much an anime equivalent of a soap opera. There are high level business machinations, the underworld, romance, as well as brief little story vignettes, such as the pervert on the metro in episode 8. It`s very much recognisable as a soap format, and the prevalence of melodrama does little to dispel that. It`s a rare episode that doesn`t have at least one main character burst into tears.

As mentioned on the previous volume review, this isn`t an anime that has been gifted with a major budget. The animation is cheap and cheerful, and positively archaic in style. But the main characters are distinctive enough, and the animation does enough in getting the story across. This is well worth a look if you want something different from your anime, and it provides an interesting window into another work culture.