DVD
The Return Of The Pink Panther 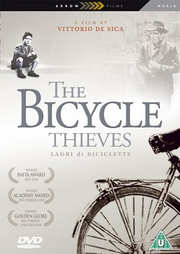 After nearly two years of unemployment, Antonio (Lamberto Maggiorani) finally finds work posting bills. But he needs a bicycle to do the job. Unfortunately, he was forced to pawn his own bicycle long ago. In a humbling, tragic scene, Antonio exchanges his family`s linen for his bicycle. But when the bike is stolen on his first day of work, he must comb the streets of Rome in search of the bike: his family`s only means to survival.

Shot on location in Rome, and using non-actors as a means of heightening the reality of the film, Ladri Di Biciclette received the Honorary Award for Best Foreign Film at the 1950 Oscars.