DVD
Alone Across the Pacific: The Masters of Cinema Series

DVD
Man of a Thousand Faces 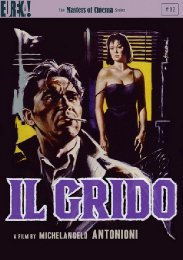 Synopsis:
A cinematic "cry" from one of the most revered of all auteurs, Italian maestro Michelangelo Antonioni (L'avventura, La notte, Il deserto rosso) depicts a world of heartbreaking alienation, with characters riven by trauma, cast against the stunning backdrop of northern Italy's Po Valley - where the director spent his childhood.

When sugar refinery worker Aldo (American actor Steve Cochran in a career-best performance) is jilted by his mistress, Irma (Alida Valli, famed for her role in The Third Man), he takes to the road. With daughter in tow, Aldo wanders the Po River delta, seeking temporary - but always illusory - respite with a series of lovers, who only serve to remind him of Irma. Unable to find a new life, Aldo's haunted past gives way to a fateful finale.

With a script conceived by Antonioni, exquisite cinematography (including a signature concern with desolate vistas), and a plaintive score by renowned composer Giovanni Fusco, the award-winning Il grido - which scooped the "Golden Leopard" at Locarno - is an early key work in the director's much-celebrated oeuvre. The Masters of Cinema Series is proud to present Il grido for home viewing in the UK for the very first time.

Special Features:
• New high-definition transfer of the film in its original aspect ratio

• 56-page booklet featuring a colour reproduction of the original Italian poster, archival publicity stills, an essay by William Arrowsmith (Antonioni: The Poet of Images), and writing and interviews from Michelangelo Antonioni