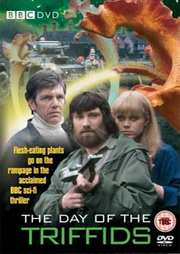 Day Of The Triffids, The (UK) (DVD Details)

Front Cover of Day Of The Triffids, The
Related Items

DVD
Babylon 5: The Legend of the Rangers (UK)

Review of Day Of The Triffids, The

1981 was a good year to be scared by the BBC. In this year I was glued to two of the scariest things I`d seen in the BBC serials Nightmare Man and The Day Of The Triffids. The world of TV was a different place back then and so perceptions change somewhat with age. Looking back now, I couldn`t imagine watching the former again, but the latter?

The 1981 run of the Douglas Livingstone adaptation of the John Wyndham novel was watched by an average of 7.95 million people. The big dip in the viewing occurred for the fifth of six episodes but more than doubled for the finale.

Bill Masen (John Duttine) is recovering in hospital with bandaged eyes. He worked on a Triffid farm, harvesting plants genetically modified in the USSR for the production of a special and rare oil. Masen was stung by a Triffid and lucky not to die. With his eyes covered, he is unable to see the spectacular meteor shower that blinds most of Britain`s population.

Finally emerging from the deserted hospital, Masen tries to come to grips with a country that has already descended into chaos. Hordes of blind people search for food and sighted people to help them, the savage side of human behaviour and self-preservation emerging in the quest for survival. This quest is complicated by the escape of the Triffids from Masen`s old farm, the strange plants killing all they can find in their own quest for food.

Presented in the original broadcast 4:3 aspect ratio. Picture quality is good, so it looks like this has been looked after in the intervening years. The on-location footage is quite impressive, but as with most old TV series the sets really do look like sets, which is a slight drawback to believability.

Dolby Digital Mono soundtrack, guess we can`t realistically expect Auntie Beeb to put a Stereo soundtrack on here for a series so old and with a limited appeal. The Triffid tapping still reverberates from your speakers, quite an eerie sound. Christopher Gunning provides a suitably complimentary score as well as a scary opening theme. English subtitles as well, which are well placed and suitably shortened when long exposition occurs.

A very detailed 12 page colour booklet that covers just about all aspects of the series.

It`s funny how rose-tinted glasses can affect the way you view something you haven`t seen for over 20 years. I could have sworn that this series oozed with Triffids and that the much fabled Triffid gun was put to much use in despatching the evil killer plants. Watching it now, well it`s probably just as well this wasn`t the case. The Triffids, whilst stunningly realised, are walking plants and the state of BBC special effects meant that it would have been laughable to have them as the core of the story. The menace is hinted at, with shots of the head and body of the plants, whilst the limited movement you see is via quick shots of the roots only. Less is more in this case. The Triffid gun only makes one appearance and the SFX shot when fired would have looked a bit silly in a Dr Who episode, let alone this serial. One of the highlights, and for me one of the scariest aspects, is the communication between the Triffids. The knocking sounds by the arm-like pods at the base of the plants are eerie and memorable, hinting at intelligence and organisation.

The joy in this story is the depiction of the breakdown in society after the catastrophe that renders virtually everyone blind. Quickly we see that sighted people become a precious commodity and that people will kidnap and kill in order to ensure that they can find such a person. Some nice touches show just how helpless people can become once they lose their sight; a woman desperately trying to open a box to gain sustenance without realising that it contains washing powder, another woman trying in vain to open a big tin of coffee before Masen swaps it for a can of beans and a tin opener.

There is a lot of exposition in this story, which tends to slow it down a bit. This was fairly typical for episodic TV back then though (see Nightmare Man, Sapphire And Steel, etc), and this series ran for 6 half hour episodes. Typically the lengthy dialogue is between various characters discussing the best way to survive in a rather sermonising way. There are certain political leanings that emerge via this dialogue but it doesn`t detract from the story in the long run.

Duttine is excellent as average man Bill Masen, his Triffid expertise not really called upon other than firing the fabled Triffid gun once and hacking another one to shreds with a garden fork. Other standout performances are Emma Relph as Masen`s companion Jo and Maurice Colbourne as the Union activist Coker. The supporting cast is very good, but this trio really make the story believable.

Although not often repeated, this serial is certainly memorable and influential too. 28 Days Later clearly references this adaptation, the similarity in the opening scenes quite transparent. Although it is clearly too slow-paced for modern TV, The Day Of The Triffids is worth watching for those with patience and a penchant for post-apocalyptic drama containing strong performances.