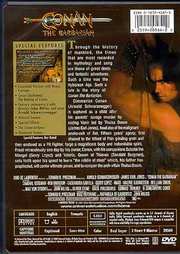 Back Cover of Conan The Barbarian: Collector`s Edition
Related Items

DVD
Conan the Destroyer (US)

DVD
End of Days (US)

Conan The Barbarian: Collector`s Edition (US) 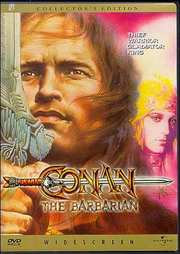 Synopsis:
Through the history of mankind, the times that are most recorded in mythology and song are those of great deeds and fantastic adventures. Such a time was the Hyborean Age. Such a tale is the story of Conan The Barbarian.

Cimmerian Conan (Arnold Schwarzenegger) is captured as a child after his parents` savage murder by raiding Vanir led by Thulsa Doom, head also of the malignant snake-cult of Set. Fifteen years` agony, first chained to the Wheel of Pain grinding grain and then enslaved as a Pit Fighter, forge a magnificent body and indomitable spirit.

Freed miraculously one day by his owner, Conan, with his companions Subotai the Mongol (Gerry Lopez) and Valeria, Queen of Thieves (Sandahl Bergman), sets forth upon his quest to learn "the riddle of steel" which, his father has prophesied, will confer ultimate power, and to kill the arch-villain Thulsa Doom.

My very first DVD movie! I have to say, this is AWESOME!!!!!!! The picture is amazing! It looks like a brand new movie! The sound is wicked!!!! The extras are so good!!! I have been a huge fan of Conan The Barbarian all my life!!! I grew up with this movie....I always wanted it for DVD, but I didn`t have a DVD! So I forgot about it, and then they came out with the COLLECTOR`S EDITION! So I went out and bought a DVD! Everyone thought I was nuts, I was gonna buy a 400$ DVD just for a movie?!?! yep....But I always did want a DVD, I would have ended up buying one anyway.....

"Croom....I have never prayed to you before. I have no tongue for it......No one not even you would remember, if we were good men or bad, why we faught or why we died! No....all that matters is that two stood against MANY, that`s whats important! Battle pleases you Crom.....So grant me one request.....Grant me REVENGE!............and if u do not listen.....than the HELL with you!!
AHNOLD aka Conan!

FILM: Conan the Barbarian is possibly the greatest fantasy/adventure movie ever. It was the movie that launched Arnold`s movie career, and is the role he was moulded for. Conan is imprisoned at the Wheel of Pain after his village is attacked by Thulsa Doom and burned to ashes. His mother and father are killed in the battle, and for 15 years revenge is on Conan`s mind. Over this period of time, Conan is transformed into a strong man, with muscles like knotted iron. By the time he is released from the wheel, all the other slaves have died from exhaustion. He is bought by a man with bog brush hair who teaches him to become a pit fighter. For the next couple of years, Conan becomes a champion prize fighter, who "does not care anymore", killing adversaries by the hundreds. When his master can no longer keep him caged like an animal-"go, you`re free"- Conan seeks out Thulsa Doom and his minions to exact revenge. On the way, he picks up a number of buddies, in the form of Subotai the Mongol Archer, Valeria the Valkyrie (his love interest) and the Wizard. The story continues with Conan being chased by wolves, attacked by a witch and crucified on the Tree of Woe. When looking back at it`s 1984 sequel, Conan the Destroyer, Conan the Barbarian proves that the first movie of a series is always the greatest. Look out for an excellent supporting performance from James Earl Jones as Thulsa Doom.
PICTURE: Anamorphic Widescreen 2.35:1.
The anamorphic print on offer here looks excellent. This is where the greatest amount of restoration effort has been made, when compared with the previous release. You would never believe that the movie was made in 1981. The only real give away is slight amounts of grain in a couple of scenes. Apart from that, the colours are extremely vibrant, edges are sharp and contrast levels are exceptionally good.
SOUND: Dolby Mono 2.0.
This is the only real let down on an otherwise great disc. The mono sound is all thats on offer here, and will probably only please the purists out there. Dynamic range is limited and the mono track sounds a little faded. Still, if you turn it up loud, it doesn`t sound too bad. The fantastic music score from Basil Poledouris comes across very well thankfully, which is mostly what counts in a film like this. It would have been nice to hear at least a Stereo remix here if nothing else.
EXTRAS: The disc really excels in the extras department. We have a 50 minute documentary featuring many cast and crew members, 2 original trailers, the Conan archives and Deleted scenes to name but a few. We are also treated to a comical commentary from the director, John Milius and the Austrian Oak himself. This commentary clearly shows the chemistry between Milius and Schwarzenegger, and the fun experiences they had making the movie. For a movie so old, you may come to expect a lot less. The excellent Universal standard is getting better and better with every release.
OVERALL: Conan is a classic movie for Arnie fans and genre fans alike. The disc is a worthy purchase, and comes highly recommended. I picked up an import copy for £17.99 including shipping; now thats what I call value for money!
posted by Richard Knowles on 23/3/2001 21:01
10 / 10

Conan the Barbarian is one of my favourite films. The Collectors Edition is even better with the extended footage. I only wish audio was 5.1 rather than mono. Nevertheless this is a must have for all Conan Fans.
posted by Ken Lum on 9/5/2001 08:12