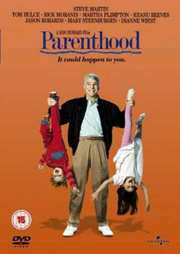 Synopsis:
Director Ron Howard teams up with an all star cast to create a hilarious, touching and unforgettable portrait of life`s most rewarding occupation: Parenthood.
The Buckman`s are a modern-day family facing an age-old dilemma of trying to raise children the "right" way. At the centre of the storm is Gil, who manages to keep his unique sense of humour while attempting to maintain a successful career and be a loving husband and father, all at the same time.

As Gil and the rest of the Buckman`s discover, being the "perfect" parent often means just letting children be themselves.

Introduction
Now here is a funny movie. It was funny when I saw it years ago, BC (before children).
If anything its even funnier if you have children, or maybe it just makes you squirm a bit as well as laugh.

The Plot
Gil Buckman (Steve Martin) is a parent, determined to be a better parent than his father was.
He is trying to raise three children with his wife (Mary Steenburgen) in the best way he can. His children don`t always measure up to those of his peer group. They all have issues - like all children. He is being hassled at work for not putting in 110% and so won`t get the promotion he should.
He is up against all manner of other comparisons, his in-laws are educating their 4 year old daughter in about 5 languages and advanced maths.
His younger brother is the apple of his fathers eye, and can do no wrong, despite being spectacularly unsuccessful.
His sister is trying to cope with two teenage rebels, of different sorts, on her own.
In other words, its your average family situation - warts and all.
There isn`t really a plot as such, just a series of funny events that happen to the various families.
Even Grandma delivers some funny lines.

This could have been a really sickly cutesy film, but instead the humour is actually pretty dry.
Some of the visual gags are just laugh out loud funny though, if not a little sick in places (literally).
One is almost reminded of a younger version of the Simpsons in a way.

There was a spin off TV show for a while, but without the original cast, it didn`t quite have the same cuting edge.

The Cast
Steve Martin really shines in this role I think. You feel for his efforts, and he delivers the funny lines just right.
Mary Steenburgen plays a great role, supportive, patient but intelligent with it.
Rick Moranis is also great as the parent trying just a bit too hard. We`ve all met people like this though!
In fact all the main players, and there are a number do really well.
Keanu Reeves has a smallish part to play in this film, as the boyfriend.

Directed by (and partly written by) Ron Howard, who has 4 children, and must feel a certain empathy.
I believe a number of the scenes are direct transfers from his and the other writers life.


The Visuals/Audio
Nothing spectacular on either, a 4:3 transfer is a shame. It has a stereo sound track, but its dialogue an situation heavy.

The Extras
Not much on the disk unfortunately. A few notes make up the extras, they give a little of the background, but more would be nice.


Summary
Well worth a watch, doubly so if you have children.
An excellent film with a lot of truth in it. Could do with more extras and a full transfer though.
posted by Julian Onions on 25/6/2004 15:37