DVD
About A Boy (UK)

DVD
One And Only, The (UK)
Related Articles 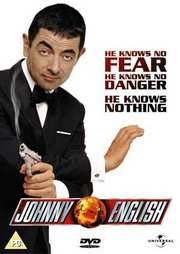 Synopsis:
Rowan Atkinson plays bumbling Johnny English, the last remaining British spy and Brtain`s last hope. With the assistant of his sidekick Bough (Ben Miller), he must investigate the mysterious theft of The Crown Jewels. The prime suspects are Pascal Sauvage (John Malkovich) a mysterious French entrepeneur, and the enticing Lorna Campbell (Natalie Imbruglia). Johnny must get to the truth without denting the nation`s pride... or his Aston Martin!

I have to say, I was a little disappointed with this movie. A spy movie with Rowan Atkinson has great potential on paper for a good laugh and loads of great gags. Unfortunately the laughs were few and far between. There are some good ones but they cant run the whole film. Secret Agent Johnny English and his partner Bough, have been assigned to recover the crown jewels which were stolen. They discover that John Malkovich is the villain behind the robbery but no one will believe them as John plays a well respected French businessman. He attempts to gather evidence and is helped along the way by sexy but mysterious Natalie Imbruglia.
The print is nice and clean but by todays standard, nothing remarkable. The picture is quite sharp and clear of grain.
The sound is quite good and there is some good use of the rear channels.
There are a few extras like deleted scenes(you need to take an observation test to get there), Making of and character profiles.
This was an average movie that could have been much more. There are far funnier movies around and without the laughs, comedy movies do become dull. The movie lacked originality and I personally preferred other spy spoof movies like I-Spy or The Tuxedo. There are not that many extras on the disc but I doubt there is gonna be a special edition so its a case of like it or lump it.
posted by dicanio on 14/10/2003 20:00
6 / 10

Johnny English - He knows nothing.

Based on the credit card adverts of yesteryear, Rowan Atkinson develops the 30second adverts into a feature film.

This is a film that had great potential. Rowan Atkinson can turn the some of the dullest subjects into hilarious scenes (who would have thought a schoolmaster reading the register could be funny?!).

It is a funny film, and has some great jokes, but somehow there is something missing. There is that indefinable quality missing that makes it a great comedy. All the parts are there, but somehow they don`t come together as well as they should.
So often is seems to be building up a head of comic steam, for somehow the pace to slip and you`re back where you were.

Natalie Imbruglia whilst nice enough to look at somehow doesn`t have the bond-girl like qualities in her character she needs. Maybe her scenes just aren`t long enough to allow a character to develop, but she could have been much better in my opinion.

Sound and video are fine.

The extras are fairly basic, including a `making of` feature which is the usual stuff - except they even left in the advert break!

The bios are amusing if you read the small print.

The hidden features are a series of outtakes, that you have to pass an observation test to get at (which I managed to fail 4 times!).
Some of the cut scenes are probably as well cut, I didn`t think the other Rowan Atkinson character was very good, so probably as well.

They do explain the bios section on Pascal Sauvage and his lift, which is otherwise absent in the film.

However the short cut of him admiring himself in his new coat I found hilarious, so I wished they`d kept that one in.

The publicity surrounding this film was that the critics had savaged it, Rowan Atkinson was so upset he was in a depression clinic and it was looking that I had bought a turkey of a film. So I wasn`t expecting much.

What did we think of the film.... Brilliant, very funny. If you like Rown Atkinson or say The Office then you`ll love it. Not many films make you laugh out loud and have you in hysterics but this film delivers to the point of you wanting to see Johnny English`s next adventure. So ignore the critics Rowan and give us Johnny English 2.

Picture & Sound Quality were excellent. Both DD5.1 & DTS are on the discs.

Extras are poor with a good Making Of feature but little else.

This film is now on sale at low prices - snap it up!

A fun (and funny) comedy featuring one of the UK`s funniest guys - Sir Johnny English.
Atkinson proves (yet again) what a great slapstick comedian he really is and his character fills the movie with numerous gags and laughs.
The video transfer is very good. There are no compression signs and the picture is clear of any defects.
The DTS and DD 5.1 soundtrack are both very good. The surrounds are nicely used during the action scenes and provide a nice enveloping sound.
The menus are nicely animated with sound.
The extras include a behind the scenes look, 4 deleted scenes (2 of which are funny as hell), interactive games, DVD-ROM features (screen savers, wallpapers, games) and a CD-ROM containing even more games.
Bottom line - for some mindless fun, agent Johnny English is the man.
posted by Zvi Josef on 21/7/2004 18:49
Intro- Er...what`s this? Spy spoof? I thought this was another Mr. Bean sketch turned movie but I was hugely disappointed: there`s is no Mr. Bean(mostly because Rowan Atkinson is type casted as Mr. Bean) in the movie just a man named Johnny English as the title suggests. The only references to the very funny tv series is when Johnny English screws up etc etc and that`s it. It may look funny at first but it won`t even raise a single laughter and you`ll be severely distressed. Compare this pain to Irreversible. IMO, Johnny English is an even more uncomfortable movie to watch than Irreversible. What`s great about the French movie is that it`s a subtitled feature so thus, it brings charm unlike this pathetic weak dialogue of a film. I`ve heard that only 1 man laughed at this film and I bet he was laughing at a ned trying to look tough.(or chav for those in England or mall rat for those in the US)

Video- Since it`s (really) pathetic, I`ll just summarise this. Presented in anamorphic 1.85:1 widescreen. It`s decent enough for me, strong colours and good levels of detail. The inevitible things is that it has some edge enhancement and the image is a little soft.

Sound- The horrible (potentially could earn a Razzie nomination) film has a DTS soundtrack! Brilliant! Except that it sounds the same as the DD 5.1 version!!!!! A pity.

Extras- The worst of both worlds(a pun of best of both worlds), here you get Making of,Self defence techniques, Character profiles and Observation tests. All pretty self explanatory. The disc is packaged in a standard amaray with no chapter insert whatsoever. This is Universal standard practice and I don`t like it. (I`m sorry to those who like it, I`m just stressed out at time I`m typing in this review)

Alias-rf2`s guide to bad(bad extras and/or bad film) DVDs:
1.Unwrap shrink wrap
2.Open (amaray) keep case
3.Take out DVD by pressing middle button
4.Use it as you see fit. You can use it as many things, including throw it like a frisbee, scoop up your dogs s*** and use it as a coaster. Results work best with a dog when treating it like a frisbee.
5.Repeat step 4

NOTES:
-If you`ve damaged your DVD as a result of scratching it or your dog bit too hard on it, return the DVD back in 30 days and recieve a new one for free.
-Remember! When not playing with the DVD, put it back inside the DVD case and store it in a cool dry place.

Parody guide will be put into my profile soon(if I`m bothered).

Overall- Making a fool of myself, I wish I hadn`t bumped into this. Bad acting, bad plot, bad dialogue. The cover is also bad, if Johnny English wanted to hold a gun properly(rather than the intentional silly way), he should`ve held it with BOTH HANDS POINTING DOWNWARDS!!!. Stay clear from this.
posted by alias-rf2 on 2/5/2005 22:43