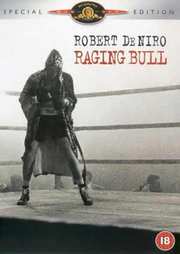 Synopsis:
Raging Bull is arguably the finest work from the Scorsese and De Niro partnership. De Niro gives an amazing portrayal of a man whose animal side lurks just beneath the surface, ever ready to erupt. Vivid and unremitting in its uncompromising brutality and honesty, the fight sequences are famed for their realism.
Violent throughout, this film is a testament to Scorsese`s and De Niro skills, creating a thoroughly absorbing film about such an unlikable character.

Renowned for throwing himself into the roles of the character, De Niro went on a diet to gain fifty pounds during the production for the role of the faded star.

Special Features:
8 page booklet revealing an insight into the making of the film
Original theatrical trailer

Based on the true story of Jake La Motta, the "Bronx Bull" who was the first boxer to defeat Sugar Ray Robinson in a professional fight, going on to become the middleweight champion in 1949. Raging Bull was nominated for eight Oscars: Best Picture, Best Director, Best Actor, Best Supporting Actor (Joe Pesci), Best Supporting Actress (Cathy Moriarty), Best Cinematography, Best Sound and Best Editing, from which de Niro won his first Actor Oscar and Thelma Schoonmaker won Best Editing. It`s a highly atmospheric film that you`ll enjoy throughout. Robert De Niro is hardly recognisable in what is possibly one of his best roles, he has realism, emotion and most of all: RAGE. He is the Raging Bull! This in my opinion is one of the best films of the 80`s, if not one of the best films ever. The choreography in the fight scenes is superb. The editing is also of a very high standard. Films like this don't come around very often, it`s an absolute masterpiece and I would most definitely recommend it whether you like boxing or not, the only "negative" side is the extras, which even on this double DVD set don't amount to that many, it includes a 26 minutes documentary exploring the making of the film plus two hidden special features, I guess that quality is more important that quantity anyway.
posted by DanMW on 5/2/2003 19:34
8 / 10

Intro/Synopsis- Raging Bull is based on a true story of Jake La Motta, who was the first boxer to defeat Sugar Ray Robinson and eventually he became Middleweight champ. His achievement did came at a cost, however. Personality wise, he was a very insecure, paranoid and deluded individual who has hurt many friends and family in his lifetime, both physically and emotionally. He smacked, kicked and bruised his wives and at one point in the film, he nearly killed his younger brother Joey. His self-destruction peaked when he was sent to jail for abetting statutory rape, causing him to break down emotionally and pounding his fists against the walls of his room.

Released in November 14th 1980, it drew a mixed reaction, leaving many members of the audience stunned and speechless. Critics did not like the unsympathetic central character as well as the graphic violence depicted in the film. However, more that 2 decades since it`s release, Raging Bull is the film which many critics refer to as Scorsese`s masterpiece, his best work to date, his magnum opus and the list goes on. Personally, I consider Goodfellas to be Scorsese`s magnum opum than Raging Bull but having said that, both remain undisputed classics for many years to come.

If you dislike violence or just plain sensitive to the unsympathetic central character, then Raging Bull is a very difficult film to watch as you see Jake (literally) bites the hands that fed him(and himself at one point). SPOILER:
His fight with Sugar Ray in one of the famous fights of history The St. Valentine`s Day Massacre is definately difficult to watch and is the most shocking scene in the film.

Raging Bull was nominated for 8 awards including Best Picture. Sadly, Martin Scorsese did not get his Best Director accolade that year because after the failure of New York, New York, Scorsese was convinced that Raging Bull would be his last film ever and wanted to put his 100% dedication to the film. On the other hand, Robert De Niro`s performance was inspiring that he did receive the Best Actor oscar, totalling his wins to 2 (he won Best Supporting Actor in Godfather Part 2). The fight scenes are so well choreograhed and stylish it makes you wonder how did Scorsese did that. On to the DVD....

Video- Because this DVD was produced in the early days (2000, 20 years after it`s original release) when anamorphic video became the norm. Raging Bull is presented in 1.85:1 letterbox format. Suprisingly, the colours or should I say shades of grey are well defined and aren`t washed out in anyway. Here`s a rundown of why I consider the video department to be quite a disappointment:

1.It`s non-anamorphic. At the time, it was acceptable to release a DVD with letterboxing. As time advances, this is considered to very shocking amongst DVD enthusiasts like myself. Because of this set back, it`s a serious thumbs down and I deducted a few marks from the video department.
2.There are frequent instances of print damage and grain scattered around the image. Again, it probably would be tolerated in the early days of DVD but now people are expecting a thorough frame by frame clean up in all their DVDs. Once again, a thumbs down to the video department.

Sound- Once again, in the early days of the DVD format, studios were less concerned with the usual guns blazing DD 5.1 and it`s more beef up cousin DTS. MGM have only provided you a choice of DD 2.0 surround English or other languages in mono. Dialogue is relatively clear and lacking the pops, clicks and hisses so don`t expect anything spectacular out of this disc. It would be nice if this was released later on but with DD 5.1 or even DTS.

The 2nd disc contains a 26 min documentary called "The Bronx Bull" which is a making of the movie featuring interviews with La Motta himself, many film critics (including Empire!!) and the editor of Raging Bull, Thelma Schoonmaker. There are no contributions from De Niro or Scorsese which is a shame. The documentary is some-what brief and if there is a re-release, I would replace it with a 2 hour documentary.

There are some brief jokes from Jake La Motta. They last for 5 mins if played together but they can be viewed individually. Finally, there are 2 easter eggs. They are both easy to find, just select the 2 `G`s in Raging Bull. The 1st easter egg is some galleries and the 2nd is rare Jake La Motta footage.

The 2 discs are kept in an amaray with a 16 page booklet. This is the most interesting of the bunch. This explains more than the documentary on the 2nd disc. Overall, the extras are disappointing. LOTR:EE type extras would be better(I`m not including the Alien Quadrilogy because the extras count for all 4 films. LOTR:EE have extra for one film.).

Overall- As I re-iterate my opening words, Raging Bull is considered by critics and public alike to be Scorsese`s masterpiece. In fact, Raging Bull is often placed in the top 10 films ever made and sometimes it reached the top 5, notably Roger Ebert list Raging Bull as his 4th favourite film of all time.

For me, it`s a seminal masterpiece but not the greatest film ever made that I hoped for. If you don`t care about extras and want the film, then this is for you.
posted by alias-rf2 on 25/8/2004 20:26