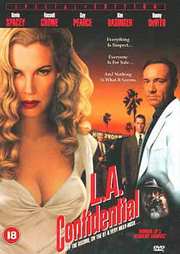 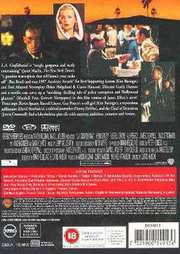 Back Cover of L.A. Confidential

1950s Los Angeles is the seedy backdrop for this intricate noir-ish tale of police corruption and Hollywood sleaze. Three very different cops are all after the truth, each in their own style: Ed Exley, the golden boy of the police force, willing to do almost anything to get ahead, except sell out; Bud White, ready to break the rules to seek justice, but barely able to keep his raging violence under control; and Jack Vincennes, always looking for celebrity and a quick buck until his conscience drives him to join Exley and White down the one-way path to find the truth behind the dark world of L.A. crime.

Warner Bros. are infamous as the studio that made all of the best noir pictures in the golden era: films starring icons such as Humphrey Bogart, set in a time when sleaze and courruption were abundant. So now, decades later, it is good to see a film-maker going back to the roots of cinema to try and break the Hollywood clichéd mould. The synopsis above is the premise of the character-driven story that has been adapted from James Ellroy`s novel: a novel that was full of intrigue and suspense, something that director Curtis Hanson hoped to capture with his version.

Boasting stars such as Kevin Spacey and Russell Crowe, at worst L.A. Confidential can say it had star potential. But, if you have such potential, combined with an intriguing subject material, then surely wonders will happen?

2.35:1 Anamorphic Widescreen. The visuals are crisp and clear with good colour definition, and the transfer is free from artefacts of any kind, such as dust and grain. The print itself has good saturation, and no compression signs are evident. Overall, an accomplished transfer.

This certainly looks like a period film - numerous locales that depict a downtown Los Angeles of yesteryear, packed full of things that nowadays are either much more frequent or much less frequent. The glossy style of the film is enhanced by Hanson`s view of how it all should be: he directs in a way that spells out control...each shot is planned out thoroughly and not a frame is wasted.

The action for instance is choreographed so that the audience can feel the tension and are kept enthralled from start to finish - whether fistfight or gunfight.

Dolby Digital 5.1 (English, French & Italian). Although classed as a drama of sorts, L.A. Confidential has enough action to grab the viewers, as mentioned before, and fortunately the soundstage is up to the task of replicating each gunshot and gutpunch. But, at times there is a lack of surround definition: although the rear channel is involved frequently, there are no effects of bullets going from one side of the room to the other, nor any amazing subwoofer action. However, the quality of the soundstage is such that the lack of definition is made up for due to crystal-clear sound and an excellent main audio stream for the dialogue.

The novel of the same name was adapted by the director, Curtis Hanson, and Brian Helgeland - and it is adapted to a degree that allows for maximum development whilst also adding an air of intrigue and deception to each and every one of the characters, along with a sense of pace and electricity injected into the narrative, meaning everything flows along smoothly.

The extras begin with a series of production notes: information about the cast; film-makers; awards the film won; background to Los Angeles in the 50s; details on `Bloody Sunday`; a selection of prices for various goods; and information about a cop show that is satired in the film. They are fairly in-depth for this kind of thing, and remain fairly interesting and informative.

The real selection kicks off though with a featurette come interactive map. Combining both types is "The L.A. of L.A. Confidential" - a map featuring all the locales from the film, and when accessed (through a simple click on one`s remote), you can watch the scene with that location, accompanied by a commentary from director Curtis Hanson. Informative and interesting.

"Off The Record" is a featurette featuring cast and crew interviews, and on-the-set footage. Consisting mainly of glowing praise for the adaptation, it charters the production concisely, and the reactions of Regency after seeing "The best film we`ve ever made". Good, and clocks in at 18 minutes so it isn`t too sparse, but it also doesn`t outstay its welcome.

"Photo Pitch" is an eight minute interview with Hanson as he talks about the design of the film, and yes, this includes a selection of photos! This is fairly interesting but could have been intercut into the main featurette to create a comprehensive making-of.

The advertising materials begin with a soundtrack promo - Hanson again talking about the music in the film. The style of this is better than the usual plugging, and actually does sell the soundtrack quite well. Then, there is the obligatory trailer: a good prelude to the events in the film.

Finally, as a nice addition, is the choice to watch the feature, music-only, showcased in 5.1 surround sound.

The menus are animated and designed well, in the style of "Hush-Hush" magazine, with animations and press-related sounds triggering off everywhere. They are fairly easy to navigate once you get used to the idea.

It is a brave thing for a film-maker to do choosing to set their film in an era that was defined by celluloid greats: some comparisons to such films are inevitable. But fortunately, from the word go L.A. Confidential rises above fellow thrillers by oozing a class that does indeed make it feel like a noir-ish tale of crime and corruption.

There is also some wonderful acting, beginning with Russell Crowe as the officer Bud White, who carries some serious excess baggage, portrayed excellently in a pre-Oscar performance. The character he plays in this seems strangely reminiscent of his alter-ego that sometimes erupts from the star, and what some may say cost him the Oscar infamously for his role in A Beautiful Mind.

Kevin Spacey and Guy Pearce give good supporting roles as the two other cops determined to discover the truth, with the former being the savvy one, and the latter being a stuck-up bureaucrat - and even Kim Basinger delivers a good performance as the hooker with what seem like values.

The intricate and enveloping plot and strong acting is held together under the watchful eye of Curtis Hanson, whose enthusiam for this project is obvious. He also tranferred the material from page to screen, so his influences are stamped all over every scene: so it is rather fortunate he is very competent behind the camera.

With touches that seem to shine every frame, and repeat value that is excellent (there is always something to look at and discover more about), L.A. Confidential truly is a gem of the 90s. Its period setting seems to enhance the `timeless` tag, and although not every viewer will want to see a crime thriller set in a time long gone by, others who have overdosed on modern cinema will no doubt welcome a breath of fresh air.

The disc itself is good by Warner Bros. standards - strong visuals, strong audio (although, as mentioned before, more definition would have been good), but the extras are the only slight letdown. An audio commentary would have tied up the bunch excellently, but due to its absence, a group of featurettes is all that is on offer. Yes, they are good, but since their combined running time doesn`t come close to the extensive nature of a feature-length commentary, the mark has to be lower.

The price for this DVD is now getting lower and lower, yet the overall quality remains high. With the only weakpoint being the extras - something that can be rectified by a re-release - although they`re not actually that bad, there is absolutely no reason not to bite the bullet (tacky cliché redeemed in context of the film...) and buy this.