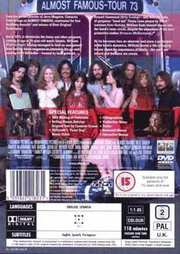 DVD
Ghost And The Darkness, The (UK) 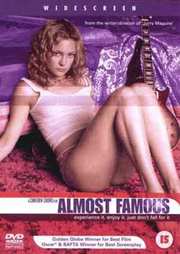 Synopsis:
From the writer/director of Jerry Maguire, Cameron Crow brings us Almost Famous, nominated for four Academy Awards and winner of Best Original Screenplay.
Set in 1973, it chronicles the funny and often poignant coming-of-age of 15-year-old music fanatic, William (Patrick Fugit). Having managed to land an assignment from Rolling Stone magazine to interview the up-and-coming band Stillwater - fronted by lead guitarist Russell Hammond (Billy Crudup), and with the help of gorgeous `band aid` Penny Lane (Oscar nominee Kate Hudson), William finds himself drawn into the band`s inner circle, despite the objections of his over-protective mother (Frances McDormand).

As he becomes less an observer and more a participant in the band`s dynamics, William learns a life-changing lesson about the importance of family - the ones we inherit and the ones we create.

This is a review of the R2: Untitled Extended Cut Director`s Edition (Bootleg Edition).

The film follows a young lad called William (Patrick Fugit) who goes on tour with the band Stillwater in order to write an article for Rolling Stone magazine. Directed by Cameron Crowe, this film is fantastic. The acting is brilliant and the storyline, although dragging on occasionally, is great.

Clear picture all the time for the main feature. Some of the extra features are a bit grainy (understandably) due to the age of them.

After seeing "Jerry Maguire" a few years back, a film which I have seen many a time, I looked forward to seeing this next effort by Writer/Director Cameron Crowe. I am a massive fan of Rock/Metal music, and after seeing how well Cameron Crowe blends film making with Music, I just knew that "Almost Famous" wouldn`t disappoint. The film is set in 1973, and tells the story of 15-year-old William (played by Patrick Fugit), a massive music fan, who is offered an assignment from Rolling Stone magazine to interview promising new band "Stillwater". But he soon finds that he is making friends with the band, and being welcomed into their "Inner Circle", much to the disapproval of his Mother (Frances McDormand). Among the bands "Inner Circle", is Penny Lane (Kate Hudson), a "band aid" who William quickly takes a liking to, though soon realises that she is in love with the Band`s lead guitarist Russell Hammond (Billy Crudup), who just happens to have a girl back home. The direction in which the story takes is excellent, along the way showcasing the genuine warmth of it`s characters which has become something you would expect from a Cameron Crowe movie. After seeing this film now a good number of times, it just seems to keep getting better and better the more I view it, which the same can be said about Cameron`s previous film "Jerry Maguire".
The film is presented in 1:1.85 Anamorphic, with the transfer being of a very high standard, showing plenty of detail even in the darker moments (Band concerts), with no sign of any grains, etc. With the story of "Almost Famous" focusing on music, it was crucial that it would take advantage of the audio capabilities that DVD has to offer, and thankfully it does. The DD 5.1 mix that appears on this disk, manages with ease to do the film and it`s excellent soundtrack justice. The concert scenes are rewarded with good work from the rear surrounds, which give the overall effect of an "arena rock" gig. The dialogue is well heard throughout the film, while the "Flight Trouble" scene invites the sub-woofer to join in. I have to say that "Almost Famous" offers one of the best soundtracks I have ever heard, which perfectly complements the setting of the story. Songs from Rod Stewart, Bowie, Led Zeppelin, Elton John and many others really shine throughout, while one of my favorite parts of the movie, is hearing the mighty Black Sabbath playing their set faintly in the surrounds, while Stillwater leave the venue for their next gig, which just adds to the genuine feel of this movie.
Overall I think "Almost Famous" is by far the best music story ever put to the big screen.... ROCK ON!.
posted by metallica on 24/3/2003 19:19
8 / 10

Im not a big fan of rock `n roll or heavy metal music, nor am I a big fan of the 60`s 70`s. This movie however was really fantastic. It is different to your average movie. The story is based around a 15 yr old journalist, who tours around with an up and coming rock band and their female groupies. During this time, he learns a lot about himself and life in general and also falls in love with one of the groupies. However time is running short and he still needs his story. The movie has a few moments of hilarity but is overall a coming of age story. I wasnt alive in the 70`s and the movie gave me an insightful view into what life was like then. Crowe recreates the 70`s image very well.

The picture quality is pretty good although there is some small grain. The sound is really excellent.

Plenty of extras here, all good stuff really but nothing that was really special.

A superb movie from Cameron Crowe. Much better than Jerry Maguire. Its not the kind of movie you`d watch over and over again but it is one that everyone should see atleast once.
posted by dicanio on 13/4/2003 17:30