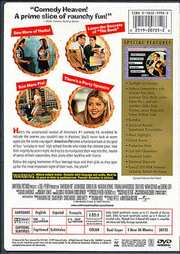 Back Cover of American Pie (Unrated)

DVD
Boys and Girls (US) 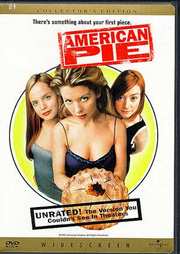 Synopsis:
Here`s the uncensored version of America`s #1 comedy hit, re-edited to include the scenes you couldn’t see in theaters.

You`ll never look at warm apple pie the same way again! American Pie takes a hysterical look at the goal of four "unlucky in love" high school friends who make the ultimate pact: lose their virginity by prom night. As they try to manipulate their way into the hearts of some of their classmates, their plans often backfire with hilarity.

Follow the raging hormones of four teenage boys and their girls as they gear up for the most important night of their lives... the prom?

American Pie was THE funniest movie of the summer and finally, it is out on DVD in region 1. Packed full of extras, it is well worth the money and I would recommend buying it. It`s the kinda film I keep watching again and again, because it is so funny, and sadly, I can realate to some of the plot - (not the apple pie scene though!)

First time, (not that you could tell from watching the excellently put together movie), director / producer pairing of brothers Chris and Paul Weitz have here a raucous teen comedy that I think is comparable to classic, (in my opinion of course) movies like Weird Science, Breakfast Club and maybe even Porkies.

For the uninformed, the plot centers around four young men about to graduate from high school, (that makes them about 17 or 18 I guess?) who are all desperate to lose their virginities. After all - they couldn`t possibly go to University without having first had sex, as Jim says in the film "They probably have special dorms for people like us."

Fed up with not having sex the four guys (Jim, Oz, Kevin and Finch), enter into a pact stating that they MUST get laid on or before prom night. Along the way Oz (Chris Klien), the all American jock becomes the sensitive caring lover and joins the school vocal jazz group, Kevin learns how to perform oral sex on his girlfriend, Jim broadcasts Nadia the cute Czechoslovakian exchange student stripping across the internet, Finch takes a s*** at school, and a whole lot more.

Although the main characters play their parts well, for me the secondary characters such as Oz`s lacrosse buddy Stifler, Jim`s Dad and flute-toting-band-dork Michelle get the best moments. For example I think Jim`s Dad (Eugene Levy) giving his son the obligatory sex education talk is one of the highlights of the film.

The DVD itself is well put together, being a `Collectors Edition` it boasts lots of features including one of the funniest feature length commentaries I`ve heard, a making of featurette, outtakes, music video and trailer.

To my untrained eye the video quality was fine, my only complaint being the noticeable switch between layers. Similarly the sound was good throughout. This is another movie that is accompanied by an excellent soundtrack which I highly recommend.

You don`t need to be a male 18 year old American virgin about to graduate from high school to appreciate this movie, but I can appreciate that it might not be to everyones taste.
posted by Barney Gwyther on 27/2/2000 14:25
5 / 10