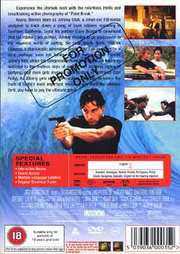 Back Cover of Point Break 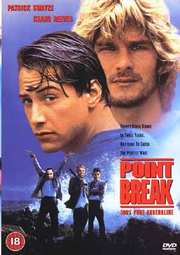 Synopsis:
In Los Angeles, a gang of bank robbers who call themselves the ex-presidents, commit crimes while wearing masks of ex-presidents Reagan, Carter, Nixon and Johnson. The FBI believes that the members of the gang could be surfers and send young agent Johnny Utah undercover to mix with the surfers and gather information. Utah meets surfer Bodhi and gets drawn into the lifestyle of his new friend.

When you see that a film stars Keanu Reeves & Patrick Swayze you probably won`t be very impressed...

But it should be remembered, when this film was made (around 1991) Swayze had recently made Ghost and was heading for the "A" list, whilst Keanu was something of an up & coming star.

Then take into account it`s directed by Katherine Bigelow and produced by James "Terminator & Aliens" Cameron and you realise, maybe it won`t be that bad.

Actually, this film is rather a good (and fairly original) thriller. I would say it`s one of the best 2 or 3 films, either star has made.

The sound is OK, but nothing special. The open sequence uses the stereo quite well to show the sound of the waves crashing. But the rest of the film doesn`t make the most of it`s Dolby Digital.

The extras are basic. Just scene access and a trailer.

This review is for the Region 1 version which has a DTS 6 channel audio option as well as DD 4.1.

Despite horrible reviews and mediocre box-office, Point Break has become a cult-classic on video. Perhaps the corny premise is easier to buy on the small screen; perhaps it is more acceptable to guffaw at Reeves` acting in the privacy of home. Whatever the reason, it makes a fine choice for late-night DVD viewing. The script, despite some lame dialogue, is actually pretty good for the genre, but it isn`t anything new.

Point Break will not sit well for those of you looking for intellectually stimulating entertainment on a Friday night. The story is basic (an undercover agent must blend in to find his man), and the characters are pretty one-dimensional. But who cares? It`s all brainless fun, and for those of you who scowl at the idea of ex-president mask wearing surfer bank robbers, I say to hell with ya!
posted by Aslan on 10/1/2004 15:33
6 / 10

1991 - The year that James Cameron placed his indelible stamp on the action-blockbuster genre. T2 crashed into cinema screens, and the hollywood action movie was never the same. CGI came to the fore and proved that some judicial digital jiggery-pokery could make the impossible possible. But it should be noted that T2 was not Cameron`s only foray into the genre this particular year, and in the same way that 2007s Casino Royale has shown the glitterati that real stunts performed by real stunt-professionals can once again wow audiences, 1991s Point Break (executive produced by Cameron) showed that there were still some new kinks to be squeezed out of the action-movie without the need for multi-million dollar CGI magic!
Point Break is action-movie making par excellence but has many faults. 16 years ago I can remember the feeling of exhiliration that the movie`s brilliant action-sequences left me with but this was dampened considerably by an ending that had me livid with frustration. But I`ll get to that later.
The story is simple - John Utah (Reeves) is a new and eager recruit to LAs FBI Bank-Robbery Unit. He is teamed up with old-timer, Angelo Papas (Busey) who believes that a three year long spree of raids by a group of masked-robbers known as `The Ex-Presidents` stems from the surfer community but this theory is regarded with scorn by his colleagues. Utah agrees to have the FBI pay him to learn to surf in an attempt to get closer to the community and therefore possibly the crew responsible for the robberies. Whilst undercover, Utah meets a soul-mate in Bodhi (Swayze), a world-class surfer and adrenaline junkie who introduces Johnny to his thrill-filled world of surfing, sky-diving and - you guessed it - bank robbery!
Directed by Kathryn Bigelow this movie is high of concept and low of brow, fumbling its mix of brutal action and zen-buddy-bonding. Its a great premise that is lost in a whirl of inconsistent acting (Lori Petty and Gary Busey come out pretty well, but what the hell was John C McGinley thinking!?!), some laughable writing ("This was never about the money, this was about us against the system. That system that kills the human spirit. We stand for something. We are here to show those guys that are inching their way on the freeways in their metal coffins that the human sprit is still alive.")and (still, 16 years on) top-of-the line action. But in Bigelow`s defence, at least to this viewer, she keeps the whole thing moving at a such break-neck pace (literally) most of these cracks are glossed over. My frustration arises with the ending which defeats all that has gone before - I`m sure that it is supposed to display the unspoken respect and understanding that two evenly matched foes have for one another - but what it does is leave a gaping hole in the morality of the whole story, which, let`s be honest, is about good guys (the FBI) beating the bad guys (the Ex Presidents)!!! Still, you decide.
Picture quality is very crisp and I have no complaints about the image on show here.
Sound, as already stated, is 2.0 surround but loses little for not being upgraded. It`s clear and there is good and subtle use of both front and rear speakers. I think some people have forgotten that simple old surround-sound can still be very pleasing to the ear!
The `special features` - a Trailer - are a let-down. It`s a real shame that the R1: Pure Adrenaline Edition extras have still not made their way over here, but still a trailer (which I still believe should be a compulsory feature on EVERY DVD!!!) is better than nothing.
Enjoy Point Break, for, despite my ravings above, there is a great deal to enjoy in a movie that has had a great impact on the last 15 years of action flicks (not least this year`s (2007) Hot Fuzz which references it heavily!). Sadly for all of its ground-breaking approach to involving the viewer in the on-screen action the film has never really had the recognition it deserves, even if it is best enjoyed with a cold six-pack and a pizza - dude!!! :)
posted by Woodie on 11/4/2007 01:44