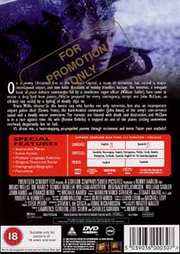 Back Cover of Die Hard 2 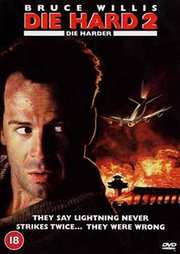 Synopsis:
On a snowy Christmas Eve, in America`s capital city, a team of terrorists has seized a major international airport, and now holds thousands of holiday travellers hostage. The terrorists, a renegade band of crack military commandos led by a murderous rogue officer (William Sadler), have come to rescue a drug lord from justice.

They`ve prepared for every contingency, except one: John McClane, an off-duty cop seized by a feeling of deadly deja vu. Bruce Willis returns as the heroic cop who battles not only terrorists, but also an incompetent airport police chief (Dennis Franz).

What i think about die hard 2
I saw die hard 2 first time when i was about 8 to 9 years old in 1991 and it was a great movie at first sight.the most exciting thing was that renny harlin directed it.i just couldn`t believe that renny had doned this wonderful movie, it was unbelieveble work from him.die hard 2 was the movie witch made me a finally bruce willis fan, because his acting was so believeble and real.one thing was ofcourse my young age, when i loved john mcclane kind of heroes and they made a big effect on me.nowdays i have started to watch old movies more than ever and i can say that during the 80`s and early 90`s were the best movie time.it is impossible to make these kind of movies anymore and that`s quite sad.maybe i have stucked too badly to the legendary 80`s, but i like it.ok now to the movie.die hard 2 is sequal which contain lots of explotions, shooting, running and excitement with good michael kamen music.it`s a dream sequal and john has got bigger place to explore this time.i really liked the idea of airport and making this movie by the novel 58 minutes was good decision.there are old friends within like dick, holly and the black cop from the first die hard, but also many new guys.it was good that die hard 2 had the same balance as the first one, but maybe this was a little bit more bigger, badder and louder as bruce willis said.even die hard 2 had a great explotions and effects, i still like as much the first die hard.actors are wonderful and feeling is on top.

The transfer
If i would have to compare die hard 2 on vhs and die hard 2 dvd, i would say dvd brings you a greater feeling, even on my compaq screen.the biggest suprise was the quality of the sound and the really clear picture.i could`t never imagine that i would get so much pleasure for the sound.die hard 2 dvd has got dolby digital 5.1 sound with thx and it just sounds lovely.every explotion and gun shots come very clear and the sorrounding little voices can be finally heard.music is very strong and my 3d speakers uses dolby and thx quite nicely.the picture doesn`t get ever fuzzy or too dark like happened sometimes in batman dvd.there shows one fast blue line during one plane crash, but thats quite minimal damage.the colors of the white snow are very perfectly adjusted and all the other lightings we also very good.the finnish subtitles were a good success, because almost every dialog were tranferred.in the vhs version there were half less subtitles than on this dvd.die hard 2 dvd includes also cool interactive menus with radar on john mcclane`s eye, sounds and few explotions.many actors have finally got good filmographys from their all movies and tv appearings.a shorth featurette, where bruce willis is telling something about die hard 2 and ofcourse the original theatrical trailer.it didn`t have as much extras as i though, but i`m clad that the movie, audio and video were absolutelly great.this was my first 20th century fox dvd and i hope that all the others are just as good.i`m very proud of renny harlin and i hope he would someday do something as good as die hard 2.jippi-jai-jee motherf***er and adio!
posted by Hamill82 on 29/12/2000 14:06