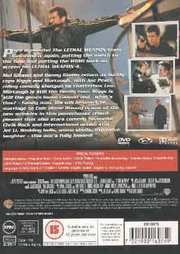 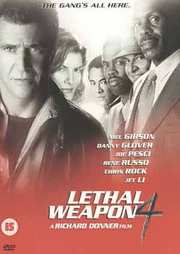 Well. What can I say about this movie. A perfect end to a great series of films. At least I hope its the last in the Lethal series, it certainly ties up all loose ends you could think of.

The Story: I`ll keep it brief. Murtaugh and Riggs are back again, this time on the trail of what appears to be Chinese (people) smuggling. There`s plentty of the usual gun fights, car chases, unarmed combat, and of course big explosions.
The humour of the Lethal series is also here... with the famous quote "I`m too old for this s**t" playing a key role.

The disk is one of the best I have seen for extras, although all extras are on the "b" side of the disc, which does mean getting up from your chair and flipping it over!.
Once on the "b" side you will find B role footage, interview galleries, A making of featurette, and more, some truly enlightening facts, and some cool outtakes and cut footage.
I believe that the American version had a commentary track, but from what I`ve been told it was below par, and didn`t include many useful facts... probably why it was dropped for the Region 2 release.
The picture quality (transfer) is excellent, but the real icing on the cake is the sound.... whoa, it will blow you away, what with all the explosions and so on.
It comes in its theatrical release ratio of 2:35:1 which is really good, as well as it being 16:9 anamorphic.

In conclusion. A trully entertaining film from the opening credits to the finalé.
A reccommended buy for those who like action films.
posted by Redemption on 20/4/2000 23:31
9 / 10

There are many reviews out there on the Internet which basically criticise the Hell out of this film. Some say that it is all becoming old and outdated now, while others question the comedy value of certain scenes in the movie.

I strongly disagree with these comments. I do admit that some signs of "age" are showing, notably on the three stars of the show (Gibson, Glover and Pesci) but the fact that these "mature" guys are still kicking ass and taking names really lifts the film and keeps it fresh for the modern audience.

As far as the plot is concerned, OK, we are not talking "Usual Suspects" material, but it is still damn good and will keep you hooked, as it plays out some interesting angles with the ideas of the USA standing for freedom and human rights compared with police treatment of immigrants, and so on. We also see somewhat of a more emotionally develped plot this time, which will not please all fans, but this is an aspect which again keeps the plot new and original. Chris Rock`s performance as soon-to-be son-in-law is hilarious, surpassed only by Riggs` (Gibson) treatment of the situation.

Now on to the DVD. The picture quality is superb, flawless, actually. Colours are bright and vivid, and the images are sharp and extremely well defined. The sound will rock your world, especially for those with a sub-woofer and Dolby 5.1 compatability. From the first opening title sequence, the digital sound is awesome.

The extras are somewhat lacking on the DVD, (a commentary might have been nice - but who listens to them anyway?!) but there is plenty of stuff to keep fans occupied. My main gripe is the menu system, as it is a bit plain, and has no sound. It is also somewhat annoying that the disc has the film in full on one side, and all the extras on the other, but this is not too much of a problem, as you are unlikely to want to use both features at the same time.

What a great movie!!! :)
All the leads perform very nicely. Of course, the plot doesn`t REALLY matter for this kind of movie, but still, the acting is good. :)
The video transfer is superb. No compression marks at all and all the special effects look very real and flawless.
The DD 5.1 soundtrack is good as well. All the bullets and explosions rocked my living room and I mean REALLY rocked my living room (my dog ran away to hide in the kitchen).
The extra features on this disk are nothing short of incredible. Despite the fact that they are located on side B of the disk, they contain so much about this movie and its 3 predecessors, that even a big fan of the these movies will find enough. :)
Bottom line - a GREAT action&comedy movie. Very fun to watch, too. :)
posted by Zvi Josef on 27/7/2000 22:49
3 / 10

after the rather average 3 i didnt think this would be much but this is one funny sequal.more comedy based than anything with some fine action scenes and a superb range of special features.this is a dvd you must own.
posted by flair on 15/11/2000 22:57
6 / 10

The gang`s all there, but perhaps should stop being!!

OK`ish film transfers to DVD well, but so it should.

Don't get me wrong now, I loved the first three Lethal films, and I kind of liked this 4th outing… but I just couldn't help but feel a little disappointed. From the beginning of this series, humour was slowly injected into each film. Lethal 1 was gritty, but some hints of humour, 2 had some great comedic moments, 3 was almost more comedy than action. and now this. Er. well. it does have some extremely amusing moments, but these usually only come from the LW newbie Chris Rock, rather than from the usually brilliant stars Mel Gibson and Danny Glover. Their comedic moments are just far too cringe-worthy for words.

Ahem, anyway - on with the disc. The video (Widescreen Letterbox 2.35:1) and audio (DD 5.1) are both pretty damned good. Where this disc really excels is it's extras (rather than it's content, unfortunately). We get some good extras and some bad, but it's just such a relief to get any extras on a Lethal disc that I really didn't care about what they were, just that they were there. Sad really, I know. There's a documentary (Pure Lethal) on the entire series, interviews, trailers, extended clips from the previous 3 outings (which have now been inserted into the original films and released as 'Directors Cut' discs), and B-Roll footage. My main gripe with this is that the extras on side B of the disc, which means you have to turn over the disc to get at them, which means getting up off the sofa, walking all the way to the DVD player. phew. I'm exhausted just thinking about it!!

Altogether, this is a well put together little package, it's just a pity the film itself wasn't up the usual Lethal Weapon standard. It's still a very enjoyable movie but mainly because it goes hand in hand with the previous three. On it's own I don't think I could be as forgiving. still, Jet Lee kicks a lot of things in it, and that can only be a good thing!
posted by Rich Davies on 9/9/2002 02:54