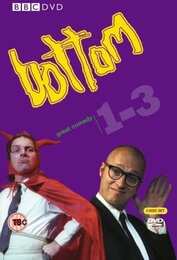 DVD
Vicar Of Dibley, The Best Of (UK)

I think one of the most unfair things that happened in my life was strict TV watching guidelines in my house. When everyone at school were talking about The Young Ones, my parents still defined wholesome, family comedy as Terry and June, Some Mothers Do Ave Em, and George and Mildred. I missed out on a formative period of television comedy that changed the face of broadcasting in so many ways. And 10 years later, my mum’s favourite comedy was Bottom. They got it eventually. A few months ago, I was suddenly in the mood to watch something funny, something unrelenting, something non-conforming, something silly, daft, disgusting, and something that refused to pander to the sensibilities of the easily offended. Episode 1, Richie offers to ‘cure’ a lesbian couple. This from the alternative comedy scene which many have long considered emblematic of the left-wing elite running the BBC; Bollocks! Yes, I placed an order for the three-season boxset of Bottom, and my life was instantly better. Let the fart jokes commence! 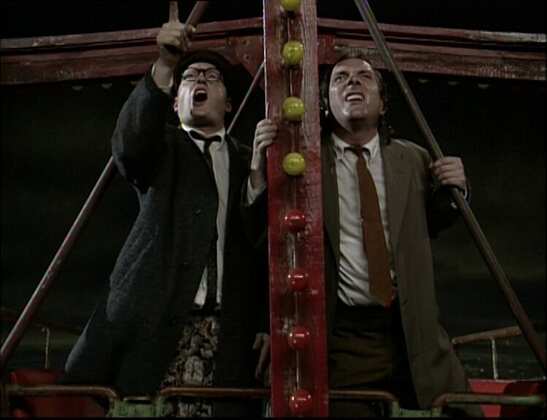 Richard “Richie” Richard and Eddie Elizabeth Hitler are roommates in a rundown hovel of a flat. They’re disgusting, they’re obnoxious, and they’re endlessly broke. Bottom follows their miserable lives together fighting boredom, and each other, and trying unsuccessfully to find someone to have sex with. 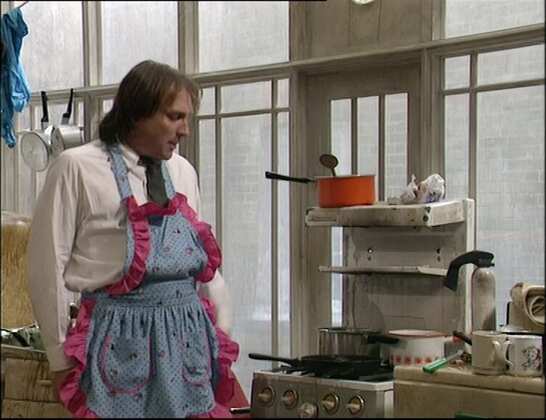 Three seasons of Bottom are presented on 3 discs, eighteen episodes in total. 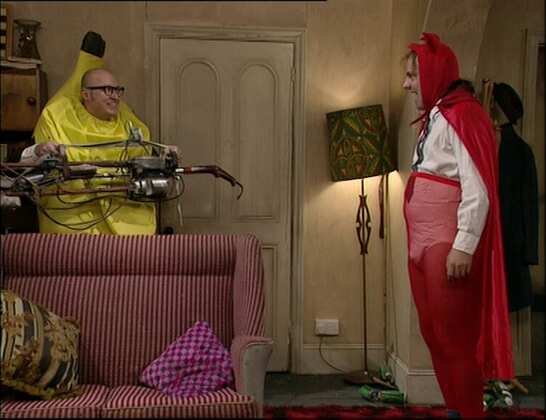 Bottom comes with 4:3 regular transfers on these three season discs with Dolby Digital 2.0 Stereo English audio with English subtitles. Season 1 alone also offers Dutch subtitles. We’re not exactly talking the cutting edge when it comes to the audio, but the all important dialogue is clear throughout, and the effects and action come across well too. Seasons 1 and 2 were made in 1991-2, while Season 3 came out in 1995, and the difference in video quality is apparent. Seasons 1 and 2 don’t look too great, studio bound and very much of videotape quality reminiscent of a whole lot of BBC comedy from the seventies and eighties. The quality of the discs isn’t too great either, with a soft image, and odd artefacts including ghosting. Season 3 looks a whole lot better than this, with much greater clarity and crispness and better colour reproduction, and less in the way of tape artefacts. 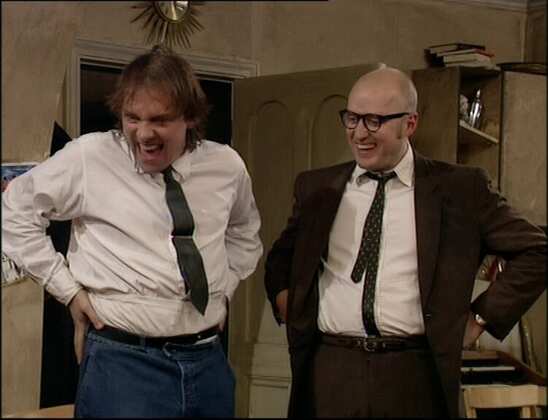 You get 3 Amarays in a card slipcase.

Disc 1 offers the choice of English and Danish menus before booting to a static menu screen after autoplaying a trailer for BBC comedy on DVD.

The sole extra on disc 1 is Bottom Fluff, 15:09 of season 1 bloopers and an additional scene from Gas. 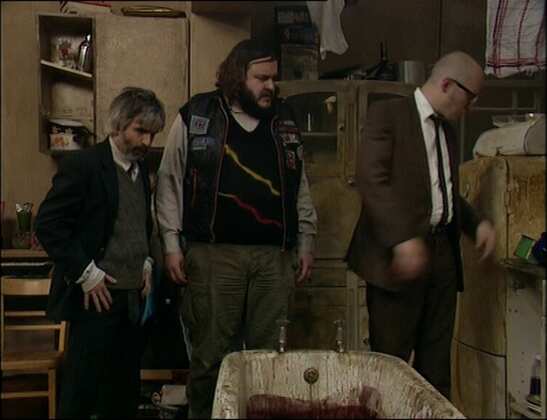 You get 28:41 of Bottom Fluff on this disc, again with bloopers and extra scenes.

Disc 3 also has an English menu, and once again the sole extra is Bottom Fluff (13:16). 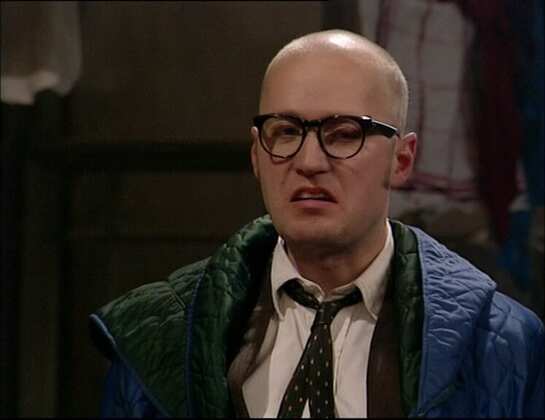 I don’t ‘like’ Bottom, but it’s probably the funniest TV comedy in my collection. Thinking back to that Terry and June quip at the start of this review, Bottom is pretty much a traditional television sitcom in structure. You have a married couple, most of the action takes place in one location, or at the most two, and it’s usually centred on a sofa in front of a TV, or the breakfast table. That is Bottom down to a tee. It’s just that the married couple are two heterosexual blokes living as flatmates, and the jokes are absolutely filthy, the slapstick is elevated to cartoon violence, and it’s utterly, utterly absurd. I shouldn’t like Bottom, but I laugh more at this show than at anything else. 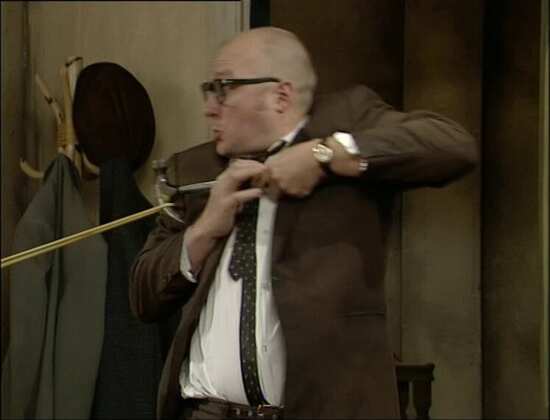 Although watching this collection, I was pleasantly surprised to realise just how much of Bottom I had missed when originally broadcast. It turns out that I had yet to watch over half of the episodes, and my nostalgic memories were mostly based on my experience of the final series. The marriage aspect of the show is played up more in the earlier series, with Richie in the domestic setting, playing the housewife to Eddie’s breadwinner character, often coming in and hanging his hat and coat up and plonking himself in front of the TV, before they have their first domestic of the episode. That kind of gag obviously can’t sustain for eighteen episodes, and there is a whole lot more that is funnier in Bottom. They did subvert it in the penultimate episode, where they steal a pair of honeymoon tickets, and Eddie actually dons a frock in disguise and discovers his inner lesbian. 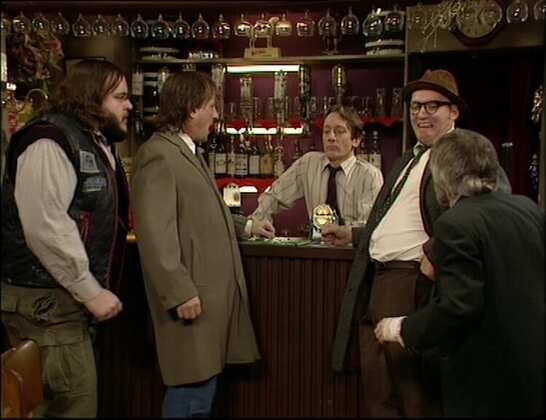 Generally the shows expand around an idea or concept, and milk the funny for all its worth. A bottled aphrodisiac, stealing the neighbour’s gas, betting on Miss World, an ominous fortune, running a shop and Richie’s birthday are explored in the first season. There’s a blind date, making money from a witness parade, catching a burglar, a game of chess, the Christmas episode, and camping in season 2. In season 3 there is an episode stuck on a Ferris wheel, the Halloween episode (my favourite), packing for a holiday, counterfeit money, the honeymoon caper, and the stolen BBC camera. These are all simple ideas from which comedy gold is usually spun. 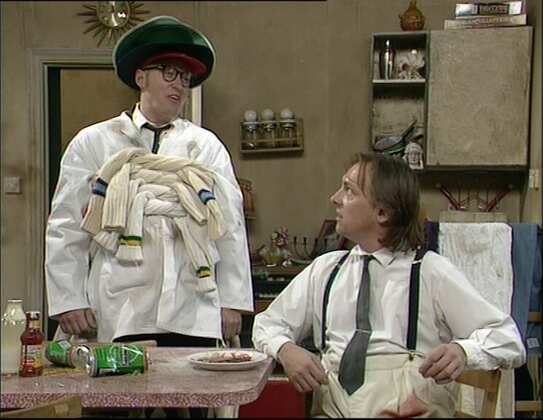 The jokes are politically incorrect and often verging on the offensive, and the one time they do ‘have’ to be PC, they make a joke of that as well. The violence is exaggerated for comic effect, and the slapstick is extreme, usually involving them demolishing their apartment. The first season is delightfully funny for the most part, but the show really finds its feet once the characters of Spudgun and Dave Hedgehog are added into the mix. But something really special happened in the three year hiatus between seasons 2 & 3, as most of the episodes in the final season are comedy genius. They are out and out laugh riots, especially my favourite episode Terror. I often wonder why electric cattle prods aren’t prescribed as a cure for constipation. It’s just Finger that pushes it a little too far into painfully embarrassing territory. Newlyweds Richie and Edwina wreaking havoc on an unsuspecting hotel makes me wince more than it does laugh, but thankfully Bottom goes out on a high with the subsequent final episode. 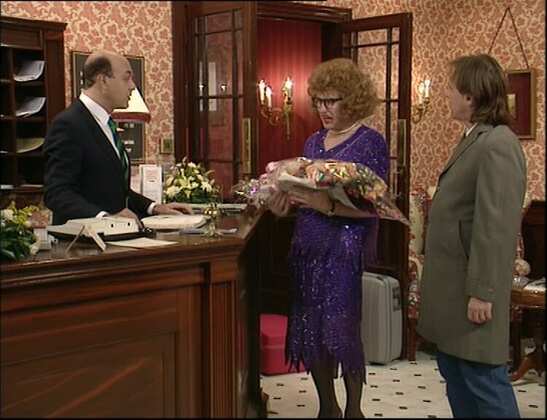 Even after all this time, Bottom makes me laugh in a way no other sitcom has ever managed. This collection is certainly getting on in age, while the transfer is as you would expect from early nineties, studio bound UK television. But none of that can detract from the content. And Bottom the TV series is a lot easier to find than the stage show DVDs at this point.