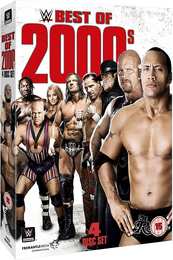 For the past few decades the WWE has had a movement that has made it unique. 1980s was the age of Hulkamania and Wrestlemania, the 1990s was the era of the New Generation and Attitude. The 2000s was the era of... erm... well it wasn't unique, however that is not to say that this period wasn't one of the best in its history.

This set looks at 19 of the best matches of that time. Presented by Mick Foley who is joined at certain points by Big Cass and Enzo, Charlotte and Bayley shows why some of these matches were so important. I'm a little confused why he wasn't joined by more people from that era such as the returning Kurt Angle, Brock Lesnar, John Cena or someone who made a huge impact during that time. However, as fans and working to get into the business they do bring an enthusiasm to it which almost rivals Mick's.

With there only being 19 matches it makes you wonder was there only 1-2 matches worth showing from a particular year? Most include their before match highlight reel and I forgot just how great they were at building up a match.

From 2000 we have the Royal Rumble Streetfight between WWE Champion Triple H and Cactus Jack. This was a brutal, hardcore match and if you are used to the PG of now then it might shock you to see thumbtacks being used. Also from this year is the first TLC match from Summerslam for the WWE Tag Team Championship Edge and Christian vs the Hardy Boyz vs the Dudleys Boyz. The multiple-man tag matches between these teams were always fantastic and though I would argue that their later match at Wrestlemania 17 was better I can't say this isn't a great match.

From 2001 we have the Three Stages of Hell match from No Way Out between Stone Cold and Triple H. The first fall was a singles match followed by a Streetfight finally ending with a Steel Cage match. This is possibly one of my all time favourite matches. It was just so unique and perfect for these two.
It could be argued that they should have put most of Wrestlemania 17 on this set, but they decide on just the WWE Championship The Rock vs Stone Cold. Everyone remembers this for the 'Heel Turn' ending and though I think it's a great match, it's just not the best match of all time. Finally, from 2001 we have the WCW Championship match between The Rock and Booker T. This was a great match and possibly one of the few highlights of the awful Invasion-angle.

It is not surprising that many of the matches come from Wrestlemania and they include the Icon vs. Icon The Rock vs. Hollywood Hulk Hogan from 2002's Wrestlemania 18. This is not a technical masterpiece by any means, but the emotional impact of this match cannot be denied. However, the following year we did have a technical masterpiece from 2003's Wrestlemania 19 between Chris Jericho and the returning Shawn Michaels. HBK had been injured and sidelined for a number of years, but it was fantastic to see him back and as good as ever. Both put on one of the best matches in Wrestlemania history.

From Smackdown in 2003 they include the amazing WWE Championship 60-minute Iron Man Match between Brock Lesnar and Kurt Angle. Possibly one of the best Smackdown matches or indeed matches of all time. Both are just wrestling machines and it is always surprising that Angle or Lesnar have not done many Iron Man Matches.

From 2004 we of course could not include the main event from Wrestlemania, but we do include the No Holds Barred Falls Count Anywhere Intercontinental Championship match from Backlash between Randy Orton and Mick Foley. This is a great match from both and showed just how great Foley was at putting people over and how great Orton was in the 'Legend Killer' gimmick.
Then from Raw 2004 we had the first ever women's main event for the Women's Championship between Trish Stratus and Lita. This is a great match and certainly showed just how amazing these two were and both Hall of Famers showed just why they belonged in there.

From 2005 we have the once again amazing technical match between Kurt Angle and Shawn Michaels from Wrestlemania 21 which, like all matches involving either of these is a technical masterpiece. Also from this year, the brutal Hell in the Cell from Vengeance between Triple H and Batista for the World Heavyweight Championship. Though I was never a huge fan of Batista, I must admit that Triple H always got the best out of Big Dave and their feud was great.

From No Way Out 2006 we had a surprisingly brilliant match between Kurt Angle and The Undertaker for the World Heavyweight Championship. This match was surprising because of just how perfect the two work together. The Undertaker really showed just how good he is and that he could hang with someone as technically brilliant as Kurt Angle.

During this time, the best feud was no doubt John Cena against Edge and this is his first appearance on this set in a TLC Match for the WWE Championship from 2006's Unforgiven. This was a great match, had a perfect feud and build to it and both worked so well together. It is a shame that this is the only match from them on the set.

From 2007 they include the classic Raw match for the WWE Championship between John Cena and Shawn Michaels. This is included on most 'Best of' sets and for good reason. It is rare for a TV match to last more than ten minutes, but this match lasted nearly an hour and for most people it was this match which proved that Cena could actually wrestle.

The same can't be said for a bizarre Raw match from the same year between Edge and Randy Orton. It is a good match, but it literally has no business being on a 'Best of' set when so many matches are missing. Finally from 2007 we have the WWE Championship match between Triple H and Jeff Hardy. This is a fantastic match let down by the ending. Personally, if you were going to include a Jeff Hardy match I would have put in his Ladder Match against The Undertaker from Raw 2002 or his World Heavyweight Championship match against CM Punk at Night of Champions 2009 (the absence of CM Punk is notable, but not unexpected).

The final match is from The Bash, between Chris Jericho and Rey Mysterio. This had a great storyline and build with the match being for the Intercontinental Championship as well as an added stipulation in which if Mysterio lost he would have to take off his mask. It was a great match, not the best by either of them, but certainly a great match.

I found myself conflicted with this set. On one hand we have (Edge against Orton aside) four disks of the best matches from WWE during 2000-2009. However, I feel like this is not enough. I wanted more. Maybe if the set had been called 'The Best Matches' I wouldn't have an issue, but it's not. Where are the great promos from the likes of The Rock, Stone Cold, Chris Jericho, Edge or John Cena? Where are all the great moments that made us laugh or cry or cringe or say OH MY GOD?

Pesonally, I would have at least have had a 2-4 minute highlight reel for each of the years. At least this would make up for some years only getting 1 match and 2008 being forgotten altogether?

However, these are some great matches, including 5 PWI Match of the Year winners. Nothing is unwatchable and maybe with a few tweaks it could have been perfect. If you want a good sample of the best wrestling matches WWE have produced during that decade then this is definitely a set to pick up.