The Organization - The Complete Series 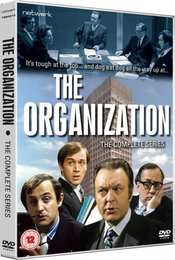 Synopsis:
Donald Sinden, Anton Rodgers, Bernard Hepton and Peter Egan star in this witty, sharply observed drama series which reveals the intrigues, resentments, bewilderments and betrayals of the staff of a large corporation. Based on writer Philip Mackie's own experiences, this award-winning series is available here for the first time

The Greatrick Organization is a faceless, multi-million-pound concern dedicated to making more millions. In its headquarters we meet an assortment of middle and junior executives, among them new boy Richard Pershore – a handsome young hopeful who knows he's just walked into a jungle; press officer Rodney Spurling, widely known as the Chairman's whipping boy; and PR head David Pulman, with his beautiful, ever-efficient but possibly treacherous secretary, Veronica.

Their lives may look cosy enough, but appearances are deceptive. All they have to do is carry on being loyal corporate slaves until they're 60 or 65, but there are a hundred different ways to put a foot wrong...