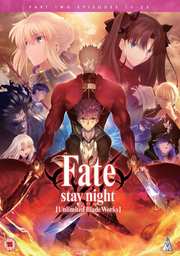 Fate/Zero came and rehabilitated the Fate franchise in my eyes. A stunning tale that combined a great narrative with astounding production values to deliver a singular experience, which erased the mediocre original Fate/Stay Night series and the messy Unlimited Blade Works film from my mind. The brief diversion of Prisma Illya offered some entertainment, but when we came back to the original Fate/Stay Night storyline, this time with a full length adaptation of the Unlimited Blade Works path through the original game, the first half of the series offered even bigger production values than Fate/Zero, even if it couldn’t quite match the narrative. I wouldn’t have thought so before, but I’ve been looking forward to the second half of Fate/Stay Night: Unlimited Bladeworks. Incidentally, MVM will soon release that first, Fate/Stay Night TV series from Studio Deen on Blu-ray, which means that the entirety of the anime Fate universe is available in HD in the UK! 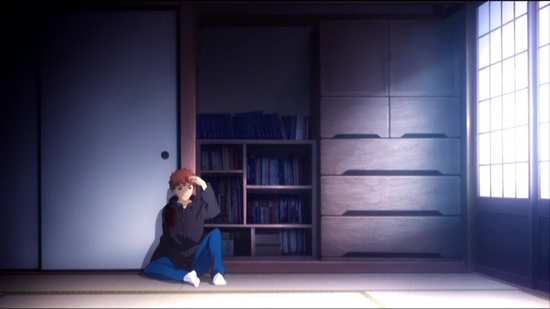 Ten years previously, a secret war over the possession of the Holy Grail raged between mages and the powerful servants they had summoned. It was a conflict that laid waste to a significant area of Fuyuki City, and the sole survivor, Shirou was rescued by a mage and adopted as a son. Shirou Emiya has an instinctive rapport with machines, and can sense how things are supposed to fit together, but he has no knowledge of the Grail Wars, or the role that his late adoptive father played in them. At the same time, Rin Tohsaka, the last survivor of the Tohsaka family, has inherited her late father’s quest to win the Grail, and is eager to summon the strongest Servant of them all, Saber to help her win the prize. New Fuyuki will be the battleground for a new Holy Grail War, as seven mages will draw forth their servants and clash. But Rin summons an unexpected ally, Archer, while it’s Shirou who surprisingly reveals hidden magical talents when he summons Saber, and gets pulled into a battle that he’s completely unprepared for. Yet it’s on the shoulders of these two young mages that the fate of the city rests. 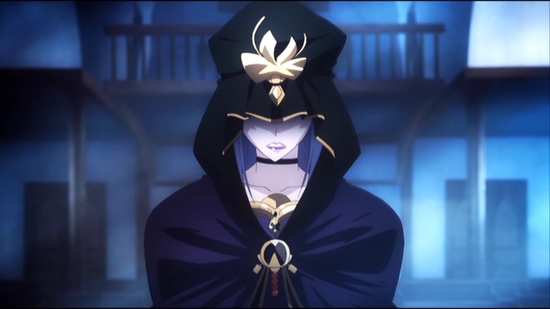 Once again, the episode timings are variable, so I’ve added them to the episode titles in brackets; although this time there are no double length episodes. 13 episodes are presented across three DVDs from MVM, and of course the show is also available on Blu. 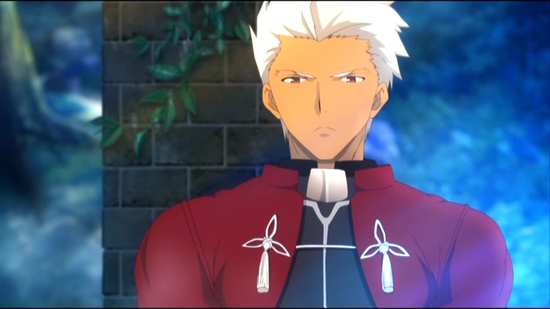 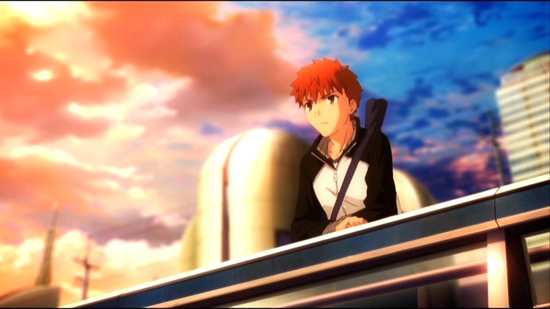 You get a 1.78:1 anamorphic transfer for Fate/Stay Night: Unlimited Blade Works, and it’s really quite a nice one, presented in native PAL with the usual 4% speedup. The image is clear and sharp throughout, with strong, consistent colours. Just as Fate/Zero did, this show gets a rather splendid and comparable animation from Studio ufotable. The characters are detailed and the animation is fluid. The backgrounds and world design are very appealing, and the action sequences speak of a decent budget and a whole lot of work. It’s a great DVD transfer for an anime, yet seeing the level of detail that is apparent at standard definition suggests that the Blu-ray will be very much the preferred option. 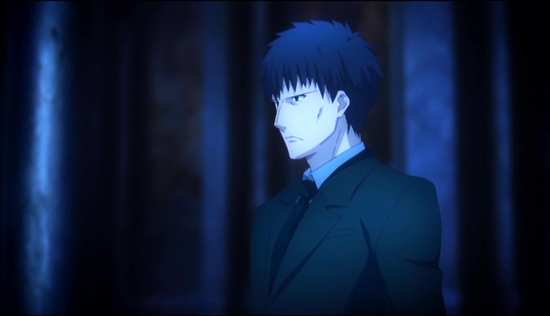 You have the choice between DD 2.0 English and Japanese, with optional translated subtitles and a signs only track. I checked the English dub to ensure that it existed (it does), but otherwise stuck to the original Japanese audio, which given the continuity of cast between all iterations of the Fate/Stay Night story is certainly preferable. The dialogue is clear throughout, with the subtitles accurately timed and free of typos. The show certainly gives good sound design when it comes to the action sequences, making the most of the stereo format, and the show’s music reaches theatrical levels of complexity and depth. 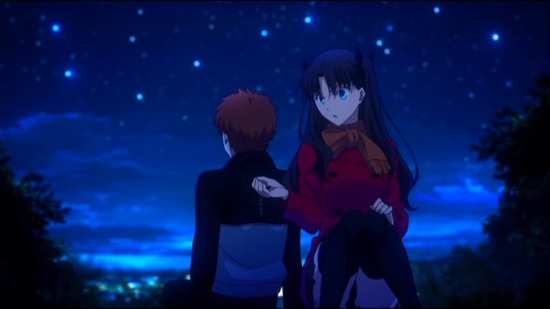 The only extras are on disc 3, and amount to 5:30 of promo trailers, 8 of them, and the textless credits. 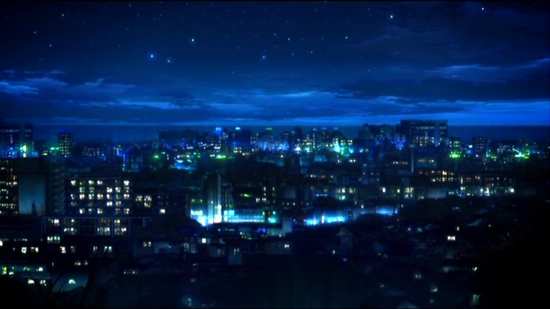 Part 2 of Fate/Stay Night: Unlimited Bladeworks was where I learned that the length of the Unlimited Blade Works movie, cramming its story into 90-odd minutes was not its sole problem. The story itself is pretty underwhelming too, a fact which is readily apparent in the anime series adaptation, where the episodes have the time to tell the story at a decent pace, and nothing feels rushed, or left out completely. The first half of the Unlimited Blade Works series really impressed with its production values and epic visuals, while the story was something of a mixed bag. Part 2 retains the glorious look of the thing, but as the tale races to its conclusion, the flaws in the story-telling become ever more apparent, and the weakness in the characterisations really do let the side down. 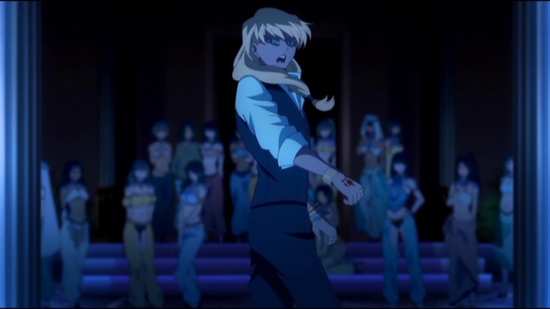 Of course I’m predisposed to dislike this story, as it’s about inalterable fate and predestination, one of my least favourite narrative tricks. This series is thankfully a little coy about it though, not making it an obvious central theme. However, once again I couldn’t help but compare it unfavourably to Fate/Zero, and it had the dual effect of delighting me whenever it would reference the prequel series, but also making me slightly resent it for doing so, as it reminded me of how weak it was in comparison. 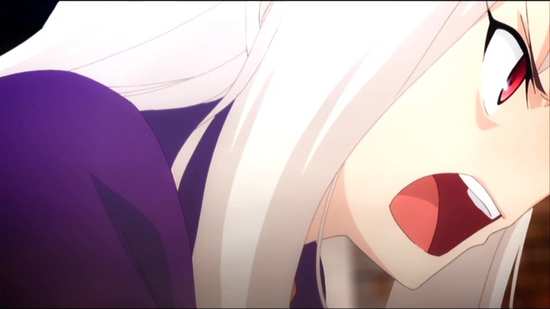 One of the legacies of its computer game origin is that the writer’s hand is more apparent as it ‘guides’ you through the story. There’s a sense of the characters facing one challenge at a time, with the sense that each character about to permanently depart the stage, gets a little character building flashback just before. Certainly that happens for Caster, for Illya, and for Assassin. There’s an added resentment in that you could wish for certain characters to stick around a lot longer than they do, but the sense is that the writer wants to move on to the next bit of the story. I still lament poor Illya’s fate in this show, and feel cheated of the character before her time. Fate/Zero does a much better job of using its characters, and integrating them into the whole. 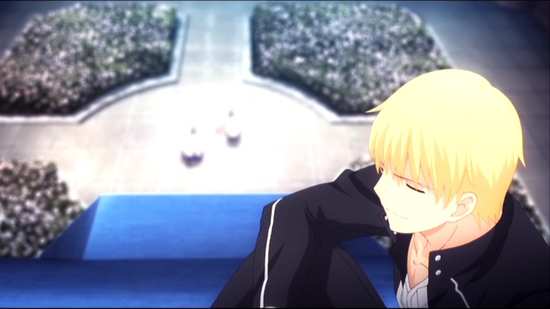 There are things that I like about this series. As mentioned the Fate/Zero references can be sweet, and the main focus of the story, Archer’s identity is handled brilliantly. I love the reveal when Shirou learns who Archer truly is. The production values are great as mentioned, the action sequences are spellbinding, and the way the story is structured, the way it plays out, makes the best use of the episodic format. But you can’t get away from how weak the story actually is, especially as the show heads towards its conclusion. There are some confrontations here, episode long battles between characters, and naturally you need dialogue to go along with the action, but in effect, it becomes the characters saying the same things over and over again to each other, in between sword swings and bursts of magic. It begins to sound like a domestic rather than an epic battle. 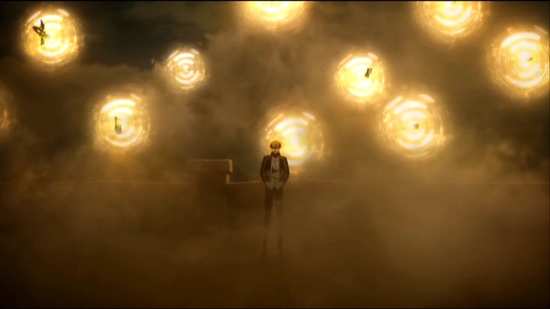 Then there is the poorly judged humour. In between all the character deaths, the torture and sexual humiliation, Rin and Shirou find the time to conduct their tsundere romance, with Rin suffering plenty of blushes and often accusing Shirou of idiocy. The final straw for me has to be the ending of the story, which is pure deus ex machina. 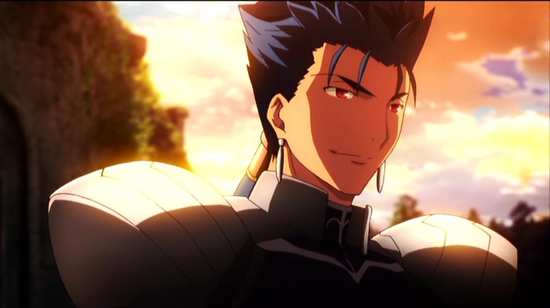 Fate/Stay Night: Unlimited Blade Works is a summer blockbuster of an anime series. Weak characterisations, a thin premise, and poorly written, but it has the production values and the budget to pull it off. It manages to entertain while you watch it, even if it’s a deflating experience after the end credits. This is one of those instances where all the bling on the screen manages to disguise that there’s not a lot going on underneath. And best of all, it’s still better than the Unlimited Blade Works movie.