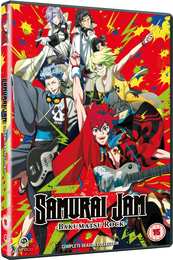 Synopsis:
There are just three things standing between Ryoma Sakamoto and his dream of becoming a famous rock star: 1 - he's barely making ends meet working in a pizza parlor, 2 - the government of Japan has banned all rock music except for the prefabricated propaganda music performed by the state-run group Heaven's Songs, and 3 - he lives in Japan in the middle of the 19th century. Okay, so those are three VERY big problems, but on the other hand, Ryoma DOES own his own guitar (even if it's illegal to own one) and that's enough incentive for him to take his one-man show on the road in search of fellow rockers. Sure, getting all feudally Footloosey in a land where a battle of the bands will probably involve swords may be a risky business, but once fellow rebel rousers Kogoro and Shinsaku come on board, there's no telling where these six-string samurai might end up!